Showing posts from January, 2017
Show all

The Women's March on Portland 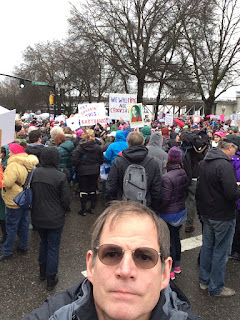 As an act of solidarity with my wife who marched in Washington on Saturday, I drove up to Portland to participate in the Women's March on Portland. In all honesty I would have rather stayed home, cleaned house and watched cartoons but that just didn't seem to capture the spirit of these revolutionary times. The cats were getting on my nerves anyway. There were closer marches; Salem might have been a better choice. Portland didn't need me to bolster their numbers but knew a lot of people going to there and hoped to connect with my friend Katie. Even if we missed, I was bound to run into someone I knew and I wanted to be around people as we start these very strange times. So off I went. I parked on the East side, grabbed a sandwich at Bunk on the way and as the rain began to pour down,  I joined the line of marchers walking over the Morrison Bridge to the start of the March. I learned some unexpected things. The first thing I learned is why people don't walk
5 comments
Read more
More posts