Showing posts from 2006
Show all

The Boys are Back in Town

- November 20, 2006
As I started writing this, Thanksgiving was just a couple days away. In response, the machines in our life seemed to be staging some kind of insurrection. As if the web server wasn't bad enough, last week the fridge, taking a cue from the horrible headlines of today, took it's own life and all the food with it. The start relay died so it just blew hot air on the food all night. Thawed everything. Left a big puddle of meat juice on the floor for me to walk through on the way to the coffee maker in the morning. We got lucky and found a service guy willing to come out the same day and deal with the thing. It lives. Carolyn made chili out of everything that thawed. The silver lining was the chance to really clean out the thing. Two days later Carolyn's cousin Gil and his partner JD arrived for the holiday. We've been getting together with them for years. Oh, the cocktails flowed! It rained like hell the whole time so there was little to do but lay around in front of the f
Post a Comment
Read more

- November 16, 2006
I have learned an important lesson. I am not built for stacking firewood anymore. Maybe a few years ago I could make that claim. OK, 10 years ago. It's rather heartbreaking. Chopping and stacking wood is one of those archetypical tasks that defines healthy manhood. William Shatner chopped wood in that last Star Trek movie he was in! Saturday night, standing on the crush pad at Carlton Winemaker's Studio shortly after stacking a cord of fir in the barn, my back began to inform me that any healthy manhood I might have possesed had left the building sometime in the late 90's and it hadn't quite made up its mind how it was going to make me pay for making it work so hard but when it did, I was going to hurt. Normally, after doing hard, physical labor, I'd take a shower, pour a nice glass of unoaked chardonnay and fool my body into thinking everything was ok. Saturday I had to pick up a case of pinot futures we had bought last February. Futures, for those of you who don&#
Post a Comment
Read more 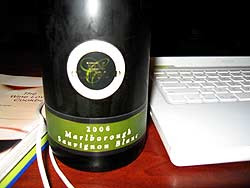 I hate days like today. They should be fun. We live in the country. Not upstate NY country. That's rural but pretty close in. This is Oregon country. Actual mountain lions. Someone living within a couple miles of us owns a machine gun and isn't afraid to use it. You wander away from home here and you might die of exposure. You can get used to that but it's nice to get back to the busy world once in awhile. So I get to go to the big city today for a meeting. The big city being Portland. It's a wonderful place. We lived there for 13 years. I got to have lunch with my friend Katie. Good Indian buffet and great conversation and somewhere in the middle of that Linfield's MySQL database decides it's getting too many connections and starts SHUTTING DOWN THE ENTIRE WEBSITE! Of course our sys admin is on vacation the rest of the week. Of course this is Spring Registration so the academic future of hundreds of students depends on online registration working and of cours
Post a Comment
Read more 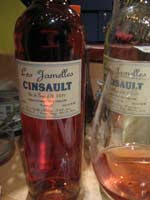 Well, suffice to say, the people have spoken. I love America. Maybe the most salient thing anyone ever said about this country is that we can go through just this kind of political upheaval and not have it end in bloodshed. I had planned on opening a bottle of Prosecco to celebrate. I'll get back to Prosecco later. Carolyn beat me home and had dinner started so she was already into a bottle of Cinsault. It's a rose. It's from France. Yes, you heard it right: France. It's an unfashionalbe wine from a country we're supposed to be boycotting. Well, that was until today. We can call 'em French Fries again! Every day I drive by a sign advertising a "Freedom toast" breakfast and I just want to weep. During WWI they took to calling saurkraut "Belgian Cabbage". I'm sure that helped in the war effort. Anyway, no matter where you fall on the I love/blame the French, it's ok to drink rose again. Really. This is a lovely one. Carolyn will tell y
Post a Comment
Read more 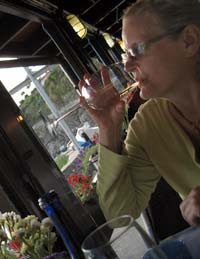 I just got back from the Higher Education Web Developers conference. It was a wild time. I was struck by the parallel threads of social networking as a web phenomenon and how much time was spent at the Hyatt Bar engaging in ...what? 3d social networking? Social networking without a "Save" button? I don't know. I concede there are many smarter people than I out there who can pontificate on that. But as I stared at my fairly unremarkable glass of red wine (Honestly, upstate NY has nothing to be ashamed about in the Riesling department and they're making headway with Cab Franc. Why couldn't they show a little pride in the local and sell it?), It occurred to me that, while I struggle to hang on to the digital social world, my wife and I are creatures of the cocktail nation and seasoned veterans of the physical social world. More importantly, my wife is a wine steward with an amazing palette and we drink a LOT of wine. So with that in mind, I have found something to
Post a Comment
Read more