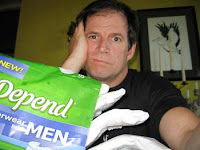 Leaving the doctor's office began what might be the most difficult part of this process. Thus far the improvements have been coming very quickly. I'm one week from check-in at the hospital and I'm walking around bag and tube free. I can climb stairs and stay on my feet for long stretches of time. I'm sleeping a good deal but I have a lot of energy. From here on out, we're waiting for my insides to heal - hence the bicycling ban for 3 months. There's no way to remove the prostate surgically without traumatizing the muscles that control bladder functions. Only one in four men have full control of their bladders at this point in recovery. Sadly, I'm not one of them. I'm sporting a pair of Depend man-diapers as we head off for lunch at the Daily Cafe in the Pearl District.

I'd like to say a few things here about incontinence. It plays a lot on our subconscious. We were taught as infants that it's bad to wet your pants. When our parents finally toilet trained us, we were pronounced "Big Boys" or "Big Girls" and we knew, even at that young age, that we had graduated to a higher plain. You can argue, and rightly so, that learning to walk is a more important achievement. But walking is a survival skill. Bladder control is a social skill. When you learned to walk your parents didn't pronounce you a "Big Boy", they thought to themselves "Thank God! He won't be eaten by lions." When you are toilet trained, they thought "Thank God! He's going to fit in society". So when you lose that control, it really gnaws at you in a really social way. You would think having a rubber tube exiting your penis and connecting to a bag of urine on your leg would be weirder but it's not. All the logical medical explanations don't entirely mitigate that. You can't escape a certain amount of guilt. I was warned about this at the doctor's and it's really true. I knew I'd be getting bladder control back. My bladder and sphincter muscle just had a week off, so their response to being pressed back into service was something like "What?" They'd come around, but in the meantime, I was feeling pretty strange.

Nothing sucks the fun out of anything quite like a full diaper. Someone could hand you the keys to a new Maserati and if you had a full diaper, when you sat down in those glove leather seats, you'd just be like "I want to go home". Lunch was pretty ok. I ordered a cheeseburger, to honor the oft repeated observation at the hospital, when I was on a clear liquid diet, that I really wanted a cheeseburger. It was fine but I could tell my diaper was filling up. A nice glass of Sancerre went flat as I could feel the wine passing straight through me and into the absorbent lining of my diaper. We did a quick stop at REI and I popped into the really nice bathroom there. The diaper was holding it's own but when you took it off it did smell a bit. I probably should have changed it but my bag of extras was in the car and I wasn't sure what to do with the used one.

Down I-5 we went. We decided to make a stop at Costco to pick up olive oil and cheese and a few other things. When I got out of the car I could tell the diaper was, well, heavy. I had clearly been putting it to work. I shuffled through the warehouse with Carolyn. We picked up the essentials but the usual distractions just didn't hold my attention. I used to be completely transfixed by the big screen TV's but today I just wanted out of there.

We sloshed back to the car, the diaper amazingly holding what felt like untold quarts of urine I was involuntarily leaking. A mile from Costco, Carolyn realized we needed gas so we made a quick right into a Shell. We hit a bump and I sneezed and immediately wet my pants. This wasn't a bit of leakage, I was peeing my pants. I started laughing and told Carolyn I just peed my pants which made me pee in my pants again. Carolyn is laughing now and I'm peeing even more and then the gas station attendant leans in our window and asks if we want to sell him our VW. I pee my pants more and Carolyn is laughing even harder.

That pair of disposable underwear died with its boots on. I'll never make fun of Depend brand underwear. It did its job admirably. Even a disposable diaper deserved better than what I put these through. It never let me down. It never leaked. I got home with my dignity.