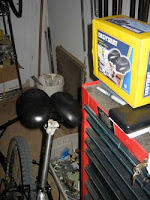 I held out for almost two months. That's pretty good. I just couldn't stand it any longer. I needed to ride my bike. I was told no riding any straddle type things (bicycles, motorcycles, horses, certain bar stools) for three months and I promised myself I would follow doctor's orders. But it's been tough. Gorgeous weather, boredom, sad looking bike in the barn, it all takes a toll on a guy.

I figured if I was going to void the warranty on my prostate surgery, I was at least going to be careful about it. Some research on some cycling blogs, particularly crazyguyonabike.com led me to try a Hobson saddle. This is one of a relatively few "alternative" saddle designs out there that popped up during the whole "BICYCLE SADDLES MAKE YOU STERILE" craze back in '02. It's basically two pads that support your butt and no horn to put pressure on nerves or the pelvic bone. I tried it on the bike on a stationary trainer for about half an hour last Saturday before I actually headed out on the road.

It was strange. To say it takes some getting used to is a bit of an understatement. To begin with, you don't know where to sit on it. Do you hang your butt off the back? Do you sort of lean against it? How far apart do you put the pads? The thing about your basic bike saddle is, you know where to sit on it. This was all new territory. After a few minutes of adjustment, it wasn't bad on the road bike on the trainer. It was pretty easy to sit up and spin and it definitely didn't hurt.

Moving to my mountain bike yielded mixed results. Leaving the shelter of the barn and hitting the road I might as well have been wearing a pair of Carolyn's underwear. Yes, more comfortable, but you wouldn't want the neighbors to see you.

I did a short ride up a clearcut near the house and back. It was ok going up but strange to descend on. You don't realize how much you use your saddle horn for control on a mountain bike, especially when you're standing up. This thing was like riding a rickety bar stool downhill.

Sunday I took a 17 mile ride with Carolyn. All pavement. I should have stopped at 10 miles. After two months of not riding at all, it was just a bit much to hit off the couch. I don't think I did any harm to myself. While I was worried about doing damage to the urethra and the bits they sewed up after the surgery, I actually felt it more around the incision scars. I think I was using my abdominal muscles to keep on the seat more than I should have. My forearms were numb by the time I got home and Carolyn thought I was favoring my left side on the bike.

One day later I feel fine. I suppose the saddle was a success. I think I'm going to confine myself to using the trainer for short sessions a couple times a week to get back in to the swing of things. I do think I need to fiddle with the thing some more.

No doctor to my knowledge endorses this product as a shortcut to getting back on the bike after surgery and I certainly wouldn't recommend it. I'm not sure it's worth it to get an extra couple weeks of riding in and there's no way I would ever take this thing on a serious mountain bike ride. Still, if you're having trouble using a conventional saddle, this might be the ticket. It's totally different.