Back in the Saddle

The downside to hijacking one's own blog to dwell on cancer is that, at a certain point, there's not much left to write about. There could be bad reasons for that - like you're dead. There could be good reasons too. The latter is certainly the case for me. My last appointment with my PA on December 11th went great. There was so little to go over we spent most of the appointment looking at pet pictures on each other's smart phones. My PA levels are undetectable which means the cancer is as gone as cancer gets. This is the dream outcome. I'm keenly aware of how lucky I am.

Ironically, I have two friends who have developed much more serious cancers in the last year. Both are blogging - All About Matt and Troy Hemmerling's Blog at CaringBridge. Both are excellent, informative reads and Matt and Troy could both could use all the good wishes you can give. My entire treatment was easier than any of the individual steps they've had to go through just to get ready for treatment. You can learn a lot about treating cancer, the strength of the human spirit, and the power of humor in overcoming adversity from both of them. 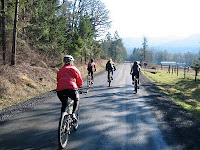 Christmas day 2009 began with a morning family bike ride. Nothing too ambitious. About 17 miles. It was remarkable for several reasons. It was Christmas Day and we were riding bicycles. Compared to last year when we were under two feet of snow, this was a miracle unto itself. It was also the first time all five of us had ridden together. Maddie, Mallory, Joe and I race and have pre-ridden courses together, but Carolyn isn't really interested in trail riding so she usually cheers us on and shuttles us around. This time we all got to roll together and it was wonderful. From 15 to 57 we were clipping along having a great time. Maddie had gold Christmas ribbons in her hair and Carolyn had bells on her wrist. It was grand! I thought of the battle damage we had: Maddie's missing finger, my sister's bad back, the metal plate in Carolyn's wrist, the scars healing on my abdomen, and I was struck by how happy we were and how, despite the injuries, we were OK and still out there in harm's way. 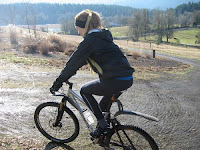 I suppose that ride marked the turning of the page. It's time to focus on other things. I have a year of racing ahead. Carolyn and I are headed to Sicily for a few weeks in March. My brother is getting married. I have some things to write about that don't have anything to do with cancer. Let's hope it stays that way. Happy New Year everyone!

Renee said…
YAY! So glad to hear you're cancer free and you're blogging again!