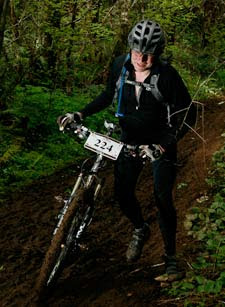 I so suck at this.

To be fair, nobody is good at riding in this kind of mud. Well, those people who finished an hour ahead of me were probably pretty good. At least they were taking it less personally than I was.

The funny thing about mud is you need to go fast through it. "Speed is your friend" someone said at last year's Mudslinger. They were right. Forward momentum keeps you from sliding out. By speed they didn't mean walking.  It takes nerve that I seem to lack.

And so ended my first Cat II race. Dead last in my age bracket. Actually just dead last, or nearly so. I think a guy with a broken chain might have come in after me. I did finish, so I have that going for me.

The thing is, I decided I want to try and do the Test of Endurance 50 mile race at the end of June on these very same trails. I thought I should up my racing miles and this was an opportunity to gauge my average speed over 20 miles to see if I could make the four hour cut-off on the first lap of the 50 mile race. You wouldn't know it from the picture but I did. So in an odd way, this is me having a small victory. A proof of concept, at least. I'm strong enough to at least do half the 50 mile race. Not bad considering I forgot my shoes for the race. Oh yes, totally ready, bike is totally tuned and cleaned, I'm feeling good and I arrive ready to race with nothing but clogs.

Yup. nothing for it but go begging with every team there to see if anyone has an extra pair of shoes. It's bad enough racing outside your class without having to inform the entire racing community that you were stupid enough to forget your shoes for a race.

God bless team Pistis. One of my Christian mountain biking friends had an old pair of Sette shoes he loaned me -  with the wrong cleats.  This was not shaping up to be an easy exercise in humility.  Back to begging. I was getting pretty good at it.

I was talking with the race mechanic about bumming some flats from him or just suffering through the race sliding off my pedals when this guy overheard me talking and came over and said: "You looking for eggbeater pedals?" I said I was (Eggbeaters are popular mud pedals. I run Shimano spd's). He said he has some and took off in his truck.  15 minutes later I'm at the starting line in someone else's shoes on someone else's pedals. Funny world.

I can't say the pre-race excitement had any measurable negative effect on my performance. Everyone was just faster than I me. That's one of the reassuring things about racing. Bitch all you want, the chances are, if you lost, it's because someone was faster than you. That kind of simple explanation is a relief in a complicated world.

I didn't feel as bad about it as I sound. This year is shaping up to have smaller, faster fields. If I'd done this last year, I would have placed more mid-pack.  And I knew I should still be racing Cat III. There's also something about this race. It has a family vibe about it. People are nice. Nice enough to loan you a pair of shoes and a pair of pedals. Nice enough to call out the four of us who did this race in the '80s and give us a round of applause.  A year ago I did this race, went in for a biopsy the next day, and spent the rest of the year taking care of what that biopsy turned up. This year I raced, went home and split a bottle of prosecco with Carolyn and got to bask in the euphoria of getting back on my bike a day or two later without the spectre of cancer.

A philosophical victory but I'll take it.