I don't think the Bauhaus had a fashion school. But if they did, I'm pretty sure their designs would have been slimming!

Sunday I poked Carolyn awake at 5am, handed her a travel mug of coffee and off we went over the Cascades to Bend for Pickett's Charge. Our charity ride went really well on Saturday and we had a fine evening with a bottle of prosecco and a light dinner, but neither of us slept well and my sunburn was worse than I thought. I was also hitting the bathroom more than usual. I was feeling sick. The symptoms seemed consistent with mild sun poisoning.

We found the Wanoga sno park, the new location for the race and Mallory and Joe's Westy parked in a minor sea of Westies. Mallory had a new bike for the race and she looked, well, different. A year and a half ago, she was terrified at the beginning of the Mt Ashland hill climb, her first race. Now, with several medals behind her and maybe 20 lbs lighter, she was in the mood to race. It got me thinking about racing and journeys and how they happen at the same time but not at the same pace. My sister and I had grown fit and found joy doing something together that was all about beating other people to a finish. It suits us. 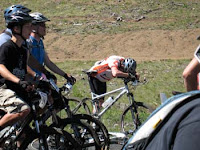 None of that was really registering at the time. I felt awful. I was shedding water at a furious rate. I was crampy, nauseous and tired at the starting line. I thought I would go in to this race angry and hungry but instead I was just trying to stay upright until we got into the trees and I could pass out in privacy.

We went out in stages. Mallory was a minute and a half behind me. the half mile opening climb felt about as bad as I thought it would. I slogged up the hill struggling to pass junior racers. The hill crested, the pack spread out and, amazingly,  I actually began to feel a bit better. Clearing the downhill fire road, we swung right onto singletrack that was beautifully groomed. I had my first bit of luck. I was able to run around a tandem that was bogged down in the tight switchbacks. I now had a huge bottleneck running behind me. The course was climbing but it was manageable. Then maybe the most unexpected thing happened. The course turned fun! It turned into this 4 mile long downhill that was twisty, bermed and crazy fun. It opened onto wider descents with doubles, table jumps and all kinds of well constructed stunts that my bike was really designed for. As air-averse as I am, and as sick as I felt 20 minutes ago, I had to hit some of this and get both wheels off the ground. I was actually feeling pretty good. Most of the course was shaded and that helped. The pack had really thinned out so I wasn't worrying about chasing anyone or being chased.

The course bottomed out and there was a long winding but not too horrible climb to the finish.  I gave up a few positions in the last mile. I was on borrowed time and I was pretty cooked by the end. I had little finesse left for tricky climbs and lost a minute or two running up steep sections. I was pleased something had come back. I began to close in on one of the riders who passed me. I was getting a rhythm up. Then the race ended. I could hear music and the crowd and as we came around a corner with me right on this guy's wheel, we just dropped onto maybe 20 feet of pavement and crossed the finish. I ended up 5th in my class, 8 minutes off the podium. I'd guess 5 minutes of that was fatigue and sun poisoning, but I was still in it and I felt good! 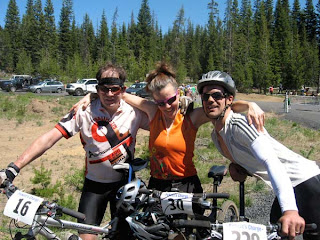 A minute later Mallory pulled in. She actually finished about 8 seconds faster than I did! Joe rolled in a few minutes later. He placed 10th Cat I. He would have taken a first in Cat II. Mallory took first in Cat III Women in her age bracket and, I think, 2nd overall.  I don't think I've ever seen her so happy. It was hard not to feel good after a race like this.

It's been a couple weeks since the race and I'm starting to feel human again. Last Monday we went down to Ashland for the Shakespeare Festival's 75th anniversary party. It was good to see old friends, though most of them just stared at me with mild disgust while huge flakes of dead skin fell off me as my sunburn peeled.  Mingling with the crowd outside the Elizabethan, we ran into old friends from our theatre days. Some we hadn't seen in 15 or 20 years. Time had treated many of them quite well. Some not so much. Looking at my wife and granting that my dessicated appearance was temporary, I think we fall into the former category. 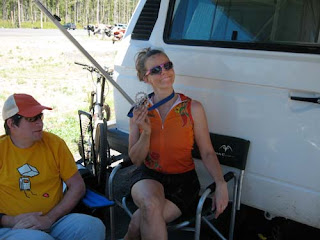