So anyone who looks at my Facebook profile noticed that my sister kicked my ass at the Mt Ashland Hillclimb last week. She really did. She beat me by 15 minutes. Think of the things you can do in 15 minutes. Get an oil change. Fall in love. Walk in to town. I mean, if you can't hold your breath that long, it's a long time. 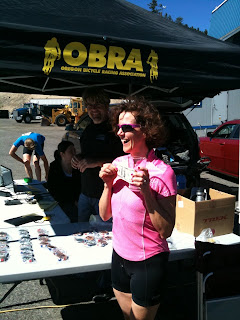 For those of you who haven't done a hillclimb race, which I think is everybody else on the planet  but the 80 people who showed up for this one, it's a very pure, lovely sort of competition. There's little skill besides not falling over because you are moving so slowly at times. No tactics. It's all about fitness, endurance and pain management. It's about being as light as you can be on the way up. People ride the strangest bikes. I ride my 1987 Bridgestone with this nasty carbon fiber seat and titanium seatpost and handlebars. Gets the whole rig in around 24 lbs. My sister showed up on her Specialized Epic with a rigid front fork and rear suspension. Her bike is 21 lbs. I know, just 3 lbs, but imagine a 3 lb weight and imagine carrying it uphill for 18 miles. The ounces add up. With the weight she lost this year, she's 30 lbs lighter than when she did this last year. It's like carrying an extra bicycle, or leaving one behind, in my sister's case. She certainly rode like she was unburdened.

There's not much to say bout the race itself. I pinned the start, wound up a bit behind the lead pack. Pretty much stayed there the first 3 miles. They pulled away. Mallory came along side me and we talked a bit. She was riding with one glove. Something to do with putting sun block on and not noticing that the race was starting. Then she started pulling away. Getting overtaken in a hillclimb is the silliest thing you've ever seen. It's like a bunch of old people with walkers racing. She's just inching ahead of me, maybe a half mile an hour faster, but you run that out over 18 miles and it translates to minutes. You think: "If I can just increase the speed I put the walker in front of me, I can catch up and pull ahead", but you can't. At a certain point, you are pedaling as fast as you can going up hill and increasing the pace will just cause you to blow up. Later, once the body has settled in to the exertion, you can dig a bit and it's really amazing how much harder you can push. There are few things as satisfying as standing in the saddle and pedaling uphill after 10 miles of climbing. It's true. But it was too little, too late to catch my sister.

I can't say I was surprised. I was carrying 50 lbs more weight uphill. And, honestly, she trained harder. She earned it. Still, I felt I had a great race. I mean, I was racing. I was out of the saddle and staying on the edge of what I could do. I finished 45 minutes faster than the last time I did this. It was a good, strong ride. Everybody who grinds up this mountain, whether on the road or dirt, commands respect. I was happy. Joe finished second on the road. He was grumpy. He lost on tactics but still finished 10 minutes faster than last year so he got over it pretty quickly. It really is all about the time. Hell, they screwed up the registration and actually posted my time with  the road riders. I couldn't get a break this year! It didn't really matter. It was quality family time and such a beautiful place to ride. As a bonus, Mallory won $100 so she took us all to lunch!  I'll always come back for this one. As long as my sister keeps winning, I'll get a free meal.