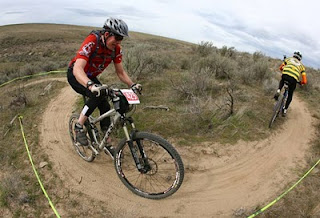 I had intended to write in lurid detail about Echo Red to Red, this crazy race out in Eastern Oregon. It's the first race of the season, held in high desert mesa country south of Umatilla. Though the mesa country around here has only a few hundred feet of elevation gain, you go up and down that continually so it's an especially tough race with few places to recover.

I had a blast and a good race but shortly after returning home, the world seemed to come unglued around us. America found itself engaged in another military adventure in the Mid-East. Elizabeth Taylor passed away, and Carolyn's cousin Gil, who's been a very close part of our West coast family as long as Carolyn and I have been together was diagnosed with what appears to be pretty aggressive lung cancer. That last event, of course stopped us in our tracks and our waking hours are filled with concern for him and fear of what we can't control.

As a culture, we tend to frame cancer as a battle many of us have to fight. That's understandable. In some ways it fits that description. There's pain, struggle, weapons, triumph and trauma.  There's also the idea that the struggle is in some way noble. It's comforting to those of us who have to watch our loved ones deal with it.

The reality of having cancer, at least in my experience, is different. It's a dreadful metaphor but cancer, especially in the early phases of diagnosis and treatment is more like a car wash (I mean the automated drive-thru kind, not the Slave Princess Leia Charity Wash kind). When the diagnosis comes back, you sort of release the hand brake, put it in neutral, sit with your hands at your side and everything happens to you and around you. You don't try to steer. You're in the pipe. You can't do much except sit and think about your predicament and do what people tell you.

There's an odd comfort in that - at least I thought so when I went through it. Things happen quickly. Experts tell you what steps are coming, what options you have (wax and polish? undercarriage treatment?). And then, gradually, the car wash metaphor falls away as you get blood taken, tissue samples taken, insurance numbers taken. They inject you, give you IVs, cut into you, irradiate you, you go through things you would never, never, imagine yourself having to deal with and you endure it with amazing composure, even humor despite the pain, fatigue and fear. Maybe because you begin this process somewhat detached from what's happening to you, you get a certain clarity that lets you laugh, speak honestly about things like love and death, and you become aware of the absurdity of so many of the things we had been losing sleep over before this happened. There's a small but important peace in that.

And then you come out the other side. That was the advice of my friend Jody, a breast cancer survivor, and it meant a lot to me. There is an outcome. I didn't take that to mean we all get better. We don't. But it does have an end. Knowing that the awful parts of the now will eventually pass, is also a small peace.

But that's not my peace. Right now, I feel helpless, scattered and selfish. I wish I was still doing that race. I wish it was two weeks ago and I didn't know Gil was sick because then maybe he wouldn't be sick. I wish I could, through force of will, push us all back through the looking glass to another reality without this disease. But I can't. So I'm left wishing for Gil's recovery and wishing I still felt the physical and emotional clarity I felt working around that race course, trying not to cramp up and maybe finish faster than last year. Racing is hard. But it gives you some of that small peace. Just for a few hours, you don't care about work, your dwindling 401k, wars, growing old, any of that. You care about finishing and finishing strong. You care about passing that guy in the stripped jersey you've been following for two miles. That's what's important right then.

Except it isn't. At least for an hour or two, if it happens to be you pedaling around out there. It's a better place than sitting here writing. Because as hard as that race was, it's not nearly as hard as watching someone you love have to deal with cancer.

RJ said…
I'm so sorry to hear about your cousin, Jonathon. I sure hope things turn out for the best.
8:16 AM