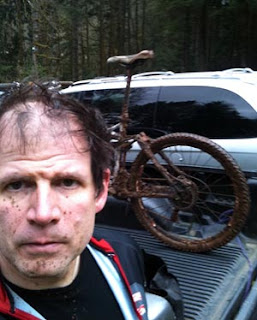 I didn't like "Hornings Hustle" much the first time I raced it. I was about 10lbs heavier and really suffered. I had just learned I needed a prostate biopsy and, after the race, a friend came up to me and said: "I just heard you're getting a prostate biopsy. Those really hurt!"

Setting aside my lack of fitness and my associating the race with painful anal probes, I still didn't care much for it. It's a multi-lap cloverleaf course and I just don't like racing laps. My inner old school boy racer prefers to get somewhere in a race, preferably with some nice scenery, a few fire road climbs, and a sense that you are a little bit better informed about where you are riding when the race is done. This race takes place in a private compound called "Hornings Hideaway". It looks like people have actually been hiding there. There are abandoned vehicles slowly rusting into the forest floor. There are houses with lots of blue tarps and random additions. There are pheasants screeching about the place just to make you jump. If you're a location scout and you're looking for the setting for "Saw Parts 12", you might want to look this place up.

Oh yes, you can play disc golf there too when you're not busy being dragged into a moss covered school bus to be dismembered.

I'm exaggerating. I'm sorry. It's a pretty location with a pond and a stage. Everyone there seems very nice and not at all like redneck cannibals and they seem to put up with 300 cyclists trashing their property every spring with a surprising amount of courtesy. The $3 bucks a head they were charging to park probably helped.

Sorry! Sorry! It's my problem. Carolyn and I and well, everyone else arrived having endured an Oregon winter that's been a six month recreation of the street scenes in "Blade Runner". Race day was no different. Dark, drizzly and cold.  I think the entire racing field arrived in a bad mood and we went downhill from there.

As it was laid out, the race had a serious problem. A few hundred yards from the start, the course funneled up a steep, narrow trail. It was a bottleneck made worse by the mud that rendered the hill unrideable.  Their solution was to add a "starting lap" that bypassed the hill, letting the field run up a fire road and thin out. This probably would have been a good plan if they just shortened the first lap and kept the number of laps the same. Instead they added the lap meaning all 280 riders ran over the already muddy course one more time. The last minute change of plans also delayed the start by 30 minutes as the rain started up again. This laid the groundwork for a disaster of a race.

Let me get this out of the way: I suck riding in mud. It's a head game that I lose before I even start pedaling. That said, if I needed a one day mud riding clinic, this race was about as educational as you could get. The Mudslinger down in Blodgett this Saturday should be a piece of cake after this one.

When the race finally started, it actually went pretty well for awhile. The first lap was actually fairly fun. It was muddy but still rideable.  The first steep hill was littered with riders off in the bushes, splayed in the mud or careening out of control but still upright down the course. I did pretty well. I cleared the first lap without any get offs. Things continued pretty well into the second lap and the steep hill we missed in lap one. Once we ran up the fire road a second time and started down the first big hill a second time, the horror of the situation became apparent. What was once pretty fluffy mud with a solid base was now 4" of peanut butter with a base that was quickly becoming more peanut butter.  I got down the hill a second time but was beginning to have trouble on the climbs. As the lap progressed I was having to get off to try and run through what I had ridden before.  The riders had thinned out considerably. I was still in the thick of it until I went over the bars on a downhill before a stream crossing.  I was fine but rattled. Crashing on something you rode 30 minutes earlier can have that effect.

My final lap was, apropos of the setting, torture porn. Starting up the bottleneck hill I had to work my way around a rider who apologized saying he was stuck. He was. If he tried to move his feet, he slid downhill on top of other riders. I guess he waited until we went by, slid down the hill and dropped out. A rider had gone down behind me and not gotten up. I saw course marshals running and people standing around the injured cyclist. What little nerve I had dried up. Not that it mattered much. Most of the course was pretty much unrideable.

I spun up the fire road, the last bit of solid ground you could ride and was overtaken by a pack of Cat II riders. As we got close to the top of the hill, one of them fell over in front of me. He just sort of stopped going forward and wound up on his back by his bike. I asked if he was ok and he didn't say anything.  I slowed down a bit and asked if he needed help. He mumbled that he needed water and sugar. Pushing  hard  and slow for over two hours in this mud was destroying racers who had planned to be on the course for half that time. Many, as it turned out, had dropped out. He had toughed it out and was paying the price. I stopped and gave him what was left in my hydration pack. This wasn't as altruistic as it might sound. I knew the trail was littered with water bottles that had been ejected from crashing bikes on the upcoming downhill. I had the energy to walk the last two miles of the race if I needed to, which, as it happened, I did. I wished him luck and left him laying on the ground when I had nothing else to give him. I felt like I should have left him a cigarette and my service revolver.

Half a mile later I grabbed a full Nike  bottle and shoved it in my cage just in case and continued down what had become more of a trudge, rather than a race.  Nothing was rideable by now. Everyone left on the field was pushing their bike through the muck. Every 50 feet the clay got so thick on the bike I had to stop and pull enough off to let the wheels roll. At one point I slung it over my shoulder and carried it down the trail.

150 yards from the finish I stopped and leaned on my bike. 50 yards ahead another rider had stopped and was leaning on their bike. This has never happened to me before. A race can be defined in many ways; you can race against a clock, you can race against other people, but a race is always about moving. This wasn't a race anymore. We had stopped. We did manage to get back on the bikes once we were clear of the last mud bog and ride through to the finish. It didn't feel like the end of a race. If felt like I had been pulled into the lifeboat.

In the end I finished 9th out of 10 finishers with 4 DNF's in my class. When the results were posted, I counted 81 riders who dropped out - about a third of the field.

A fiasco? Definitely. Rumors are circulating that the race won't happen next year. Am I happy about that? No. As bad as this race was, that would be a pity. Blame La Niña or climate change, the real problem was the combination of soil type and weather. A better solution might be to move the race into May or June. The course would be dry and mostly shaded. My horror movie set would feel like a cool oasis. Spectators, the people who really should have benefited from the course, would have a better time. That beer at the finish would taste even better. I'll never love multi-lap races, but I could learn to like them on a hot summer day with two kegs of IPA waiting at the finish.

This is me hoping for a Horning's Hustle next June.

Joey said…
Back in my rugby days, I used to love mud. Everything moved more slowly, which meant it moved at the pace I always moved. Plus, one could frequently hydroplane across a wet field if tackled, which was probably the fastest I ever moved anyway. Fun!
4:40 PM