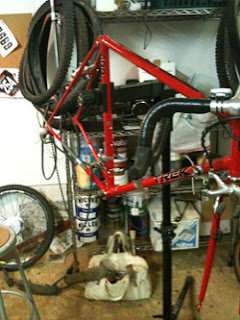 The day the 1988 Trek 400 that I won on eBay arrived, Gil called to tell us his cancer had spread to both lungs, his liver, and rib cage. He had discontinued treatment and hospice was called in.

That was last Thursday. Carolyn and I drove down and arrived at Gil's on Monday. There's not much for us to do except hold his hand, talk a little, keep JD smiling as much as possible and take care of any small things that need doing. Mostly we look on as someone we love so much slips away from us with alarming speed. He sleeps most of the time now and eats very little. His pain seems to be manageable though Gil was always pretty stoic when it came to these sorts of things.  He's certainly ready to be done with this. He's not afraid. I think he's mostly annoyed. This is a messy way to end a life and Gil always hated clutter.

I'm struck by the destructive process cancer works on an individual. It's not enough to end a life, it has to consume the person, deface that person's body with an energy that I can only describe as malicious. It's an act of vandalism. That a man can find peace in the middle of such an atrocity says a great deal about the strength at least some of us carry inside.

The mess will be gone soon. Cancer only holds us in life and Gil's is ending. The pain will go. Gil will go. The machines that help him breathe will be turned off, the tubes, bottles, packs and pills will be put away. Things will be neat again. But the world will be so diminished in his absence.

As I hold his hand while he sleeps, I think about that Trek in the barn back home. It is a magnificent find. It must have sat in a garage for 20 years. The tires are shot. The bearing grease has turned to something other than grease but it's an American made, brazed, lugged, steel bicycle that's been forgotten for too long. I want to finish rebuilding it. I want to repack the bearings, replace the cables, tires and tubes, polish it up and take it for a ride. I want to take something dusty, corroded, damaged and dirty and I want to make it shine again. I want to bring something back from the dead. I want to pedal that bike in the sun and think of Gil and the amazing times we shared with him. I want to think of what a fleeting gift it is to be healthy and strong and able to ride such a beautiful machine to the point of exhaustion and be able to come back and do it again with the clear and certain knowledge that one day I will have to stop, as we all will.