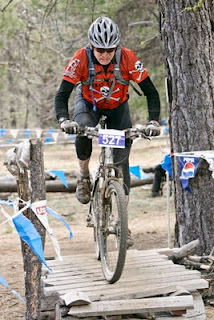 In spite of, or perhaps because of Gil's sudden death, I've been packing in as many races as I can and I'm actually having fun. I promised myself I'd do two new ones this year so after Mudslinger, I went out to Bend for the Cascade Chainbreaker and a month later, back over to Sisters for the Sister's Stampede. In between I squeezed in the Spring Thaw down in Ashland. I've had strong mid pack finishes in most of them and I had a great time racing in all of them.

I suppose it was my way of thumbing my nose at Fate for taking someone away so dear to us. Sure, life comes to an end for everyone, but in the meantime, I'm going to go out there and race my flabby alcoholic heart out just because I can. I'm strong, smart, and I can put the hurt on people half my age and I'm going to enjoy it when I do!

Then my bike frame broke.

It wasn't even a spectacular break, the kind that gets you free beer after you've limped to the finish bloody, bruised, with your frame in two pieces. No, I was cleaning the bike after Chainbreaker and noticed that a crack had developed right below the seat post clamp. It went about half way around the tube. A quiet little reminder that everything falls apart eventually and I should continue to have fun racing but I should probably stop thumbing my nose at Fate. 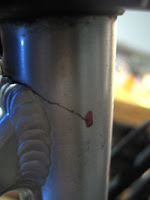 Once upon a time, you could take your damaged bicycle frame to the shop you bought it from and someone could re-weld a break or cold set a bent tube and it might be ugly, but you could keep riding it. Fast forward to the age of eBay,  hydroformed aluminum frames and personal injury attorneys and your damaged bicycle frame that you bought from a complete stranger on the aforementioned auction site is scrap metal.

I've never been one to anthropomorphize my bikes. I don't name them or talk to them. I don't put stickers on them or personalize them beyond changing out parts to make them work better for me.  But since this one has clearly reached the end of it's life, I've been having... feelings for the thing.  It would be a lie to say it's never let me down. It's sheared suspension pivot bolts. The forks blew their seals mid-race a year ago so every bump felt like I was getting hit with an aluminum bat. It was also too small for me, which was probably why the frame failed.  But in dealing with all those things I learned how modern full suspension bikes are put together. It filled in a decade of knowledge for me. And most of the time it was a dream to ride. That ride took me back to places I hadn't seen in 15 years and it took my body back to a level of fitness I hadn't seen in just as long.

I took it for one last dance at the Sister's Stampede. A 12 mile race half of which seemed to be through rough rock gardens that the Felt was designed to sail over. It was a grand farewell. I started to understand that you don't have to name a bike to ride it well, but you do have to relate to it. Maybe like an inflatable sex doll. You're just not going to get the full benefit from it if you don't endow it with a certain amount of personality.

So I've stripped the thing and I'm in the process of moving everything I can over to a 2009 Yeti ASR frame. It should fit me better. It will be lighter and faster. I can't shake the feeling that it won't be as much fun.

RJ said…
I need to either fix my old bike (called Blue Lightning) or get a new one so I can be bike riding to work. I saw one I wanted down at Tommy's Bike shop. Now if I could just let myself part with 600 bucks...
4:10 PM