I'm looking out the living room window at the freight train that is Fall in Oregon. It plowed into us last night around 10pm with high winds and now some rain. If I was inclined to anthropomorphise the weather I would say this was something of a kindness as it held off the twelve hours needed to compete in the Oakridge Fat 55, the last, and toughest race of the season.

It was sunny and warm in Oakridge and I wish I could say I had a great race but it went bad early, around mile 20 when I found myself hung up in tree branches with my bike on top of me, having overshot a switchback and gone over the edge of the hillside that was decidedly cliff-like in that particular section. Any race where you end up suspended in tree branches with your bike on top of you is a race that's gone bad. I didn't really know it then. I was too busy trying to get out of the tree and back on my bike before someone saw me. 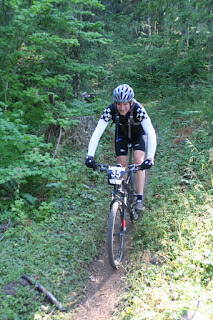 I soldiered on and actually looked pretty good at the halfway point but in the end I quit at mile 48. I bonked somewhere around mile 36 and walked/weaved/stumbled eight miles back to pavement. I threw the race before the last four mile paved climb to Larison Rock Trail.

There are several aspects to this that I've been thinking about. The most preoccupying are the mechanics of what actually went wrong. How could I not complete a race I finished last year under more difficult conditions when I was 10 lbs heavier? How could I throw the race when I was so close to finishing? A four mile paved climb is easy.

First of all, it wasn't the same race. The first half had to be re-routed and the first half of the course was front loaded with extremely difficult trail descents. Technical descents are not my strong suit. Last year's course which had more fast, smooth trails with good flow worked to my favor. Walking steep, slippery switchbacks burns more calories than riding them. Halfway down a smooth section I rode last year before the halfway point, around mile 23,  I had to stop to eat and recover. That's when I knew I was in trouble early on.

It was also hot. By the time I was on the eight mile fire road traverse to the Larison Creek trail it was in the mid-80's. Maybe that's not scorching to you, but to me, halfway through a 55 mile mountain bike race, it was an inferno. Last year it was pouring rain by the halfway point. It was miserable but overheating wasn't an issue.

One thing that went well this race was hydration. I kept my hydration pack topped up and choked down three Endurolyte capsules every hour which kept my usual cramping down to a minimum. I really concentrated on getting this right which contributed to the biggest error of the race: I blew my fueling. I simply didn't eat enough.

If that seems like a glaring error to you, you would be right. I've been pondering this quite a bit. I had plenty of gels, chews, and a couple of Honey Stinger Waffles in my bike bag. The waffles carried me as far as I got. The pros would tell you that energy gels and electrolytes would get you through. The 50 year old computer guy in over his head in an endurance event will tell you he needs Real Food. I didn't listen to him. As I get older, I seem to do better eating solid food when competing. I also seem to need more protein. I don't know what the science is, there may not be any. I don't know how many studies there are of older athletes' nutritional needs are out there. Anybody need a PhD thesis?


I also forgot my cooler full of fruit and water bottles at home. While I filled the water gap at the aid stations, the fact that I forgot a big red box I had been tripping over all morning might have been a warning of a more subtle issue. I was getting sloppy because I was mentally finished with racing for the year. I really was. I spaced the cooler, I split Carolyn's energy bars I had bagged to carry with me during the race with Joe while we were waiting to start.  I could have picked them up when I passed my car at the halfway point. The thing is, I didn't. I was phoning it in and I paid for it. I need to treat 50 mile races the same way better riders treat 100 mile races. I need to sweat the details. Racing is about homework. It's about being on. If you're a pro, or struggling not to be DFL, those two things are always true. I came up short in both places.

Joe had a great race, finishing 2nd in his age bracket. I saw him at the 3rd aid station before I set out on the long fire road that I blew up on. He was on his way back up the road I chose not to climb at the end. I knew he was crushing it. He rode up next to a guy who was throwing his guts up on the road next to the aid tent. Joe cheered him on, telling him he could never work so had he would throw up like that. He jumped back on his bike and headed off to finish the last couple miles of climbing and I swear he was beaming.

So why didn't I suck it up and try to get to the top of that last climb? The worst was behind me. I was nearly out of water but probably had enough to get to the aid station halfway up. The farther I get from that moment, the harder it is for me to answer that. I think I measured my physical exhaustion, which was pretty close to total, against the reality that I was going to finish the race an hour slower than last year. I knew that if I finished the climb, I would be shelled and would still have a technical descent to negotiate. Fatigue piled on with risk and the frustration of finishing slower did me in.


Am I disappointed? You bet. Am I depressed? No, not really. Every race is hard. This race was fucking hard. 13 out of 53 riders didn't finish. Better riders than me were brought down by this course. I might have been able to drag myself up that last climb if someone had told me I would get a $600 wheelset or a popsicle for doing it. No, really, I'm not kidding. The last place finisher this year got a trophy and new bike wheels. Last year when I DFL'd, I got a rousing round of applause from the volunteers who were really ready to go home. That was about it. On the plus side, I did get the popsicle after the race this year. It was the greatest thing I had ever tasted.

Most races give you some margin of error. This one didn't. I'll learn from it.

Afterward, sitting in the grass in the park listening to bluegrass, sucking on my popsicle, talking with Joe and some of the other racers, I felt ok. It was warm, it was a hard day, but it was also a Valentine to summer, which was going away right before our eyes. As the awards ceremony wrapped up, a few drops of rain began to fall. The season was over. It was time to go home.