Back to the Barn 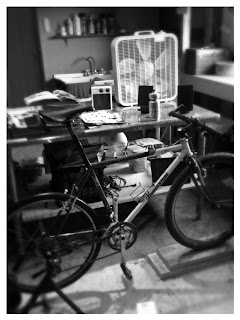 It's that time of year again. It's cold. It's dark. It's windy. It's rainy. Every bike magazine will tell you to suck it up and get out there and ride. Loving suffering is part of cycling and this time of year you don't have to wait for it. You're suffering the moment you open the door! I should be thrilled! The 'cross people actually look forward to this weather! Honestly, I would be out there except for one thing: it's also hunting season. That means that in addition to the usual army of firearms enthusiasts that line the Gooseneck fire road system, I've got a whole bunch more in the woods shooting in every direction. It's a wonder any of them make it out alive.

So, for most of November I spend a good deal of quality time in the barn on my old Bridgestone hooked to a stationary trainer.  I don't really mind. It's kind of a relief to just throw some shorts and shoes on, grab a bottle of water and go beat myself up for an hour instead of getting the whole kit on, inflating the bike tires, setting the computer, etc, and then deal with the shooters, joy riders and ATVs. It's a good time to reflect on the past racing season, visualize the next one and just let the mind unhook without having to think about where you are going or what's coming up behind you.

One of my recurring thoughts is how hard we make it on ourselves to ride a bike - how much money and time we spend before we've even planted our feet on the pedals. So much of cycling is stuff. Shorts, jerseys, socks, shoes, gloves, the helmets, lights this time of year, hydration packs, computers, energy bars - it just goes on and on. It's expensive and it takes a toll. I'm on my second helmet this year (Thanks missing ramp at Black Rock!). I've gone down a size and now I'm stuck with a duffle of large jerseys that look like potato sacks on me. Oh yes, then there was the new bike frame. Money, money, money. Who can afford this?

I remember years ago working summerstock in Utah, when I was actually pretty strong and happily misspending my youth, I'd go ride in this amazing sort of micro-canyonland outside Cedar City.  Kids with full face helmets and body armor gapping roads and getting monster air have probably turned it into some freerider's wet dream by now. But back in 1989, before freeriding was invented and shortly after we had given up hunting for food with sharpened sticks,  I'd just grab my Bridgestone and go run the loop through it. No helmet, no gloves, no prep. Just ride the bike. It was liberating. I know, I know, it's dangerous to ride without a helmet. I get it. It's just that the act of wearing a helmet, just like the shorts, jersey, gloves, etc has become an inseparable part of the act of riding a bike. That makes the whole thing so much harder to just do.

And  then I think of the challenges of riding a bike in a culture that has enshrined driving as part of its cultural identity. I'm sure if cars had existed, the Founding Fathers would have written the right to keep and drive them into the Constitution right behind the guns. People on bicycles interfere with that understood right. Drivers are encouraged to "share the road" with the same sort of parental encouragement we usually reserve for snotty children who won't share their toys. That road is usually shared grudgingly. Often that road is where drivers live out their passive-aggressive fantasies.

I think of the ghost bike - a shrine to a cyclist struck down by a driver - Carolyn saw in Austin a couple weeks ago. You see them in Portland too. You see them in most cities. Bikes painted white with a description of the rider who died, chained near the scene of the accident. I'll bet the driver got off easy. They usually do in bike related deaths. I remember Cyclist Down's endless list of rider casualties. Certainly some are genuine accidents caused by a driver not seeing someone, or were caused by the cyclist or caused by mechanical failure. But every cyclist, every single cyclist who has ridden on a paved road, knows what it feels like to be menaced by a driver. Obscene hand gestures, shouting out the passenger window, revved engines, getting buzzed by a car, those are just the ones I've experienced and I usually ride off-road. In that place, I don't believe for a moment they were all accidents. It's not a jungle out there, it's society at its worst and that's much more terrifying. As I pedal away in the barn I'm relieved I'm not out there.

I think about being held hostage by gear and fear and as I look out the window of the barn at the mountains - at my mountains - I realize if all goes well, I have 30 or 40 years left to live. Do I want to spend it spinning my wheels, or do I want to find out where that road goes I passed up there last summer while I still can?


It's still raining and even in the barn I can hear the occasional boom of a hunting rifle. But the fear subsides and the desire to just get out and be in it takes hold. It's good to stop and think for a bit. It's better to go do something so you have something to think about.