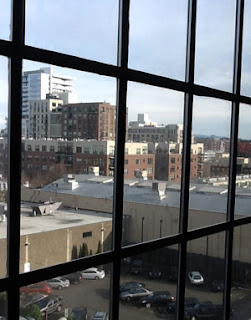 Looking out at the Pearl District cityscape that didn't exist when we moved here in 1988, I'm thinking about how much of where we live and how we live is of our own making. This neighborhood used to be an industrial district and a hub for the Burlington Northern railroad. I used to drive over the Lovejoy viaduct past the engine house and turntable at one end of the freight yard. This loft I'm sitting in used to be a warehouse. Then it had a Gold's Gym in it. I used to lift weights downstairs. All of that is gone, or at least morphed into something that better meets the needs of the present.

It's New Year's day 2012. Carolyn and I ended our 10 year tradition of spending the night at home with a garden hose waiting for our neighbors to do something stupid with fireworks. They haven't burned anything down yet and have even managed to put on a couple of good displays over the years. No, it was time to stop fretting and go do some celebrating. This year's losses were a good reminder that life is to be lived and we're old enough now to stop worrying about whether we fit in or not. We probably don't so we should just get over it and go have some fun.

Anne had just got back into town and we had said goodbye to my family the day before. With neither time or energy to entertain, we opted for dinner out. Metrovino was the perfect setting to ring in the New Year.  The food was grand and the champagne was opened "sabrage" - with a sabre breaking the neck off the bottle. Classy and dangerous! But by midnight the party was down to the staff, the three of us, a forensic psychologist and a defense attorney at the bar. Nice company if a bit small for a New Year's party. Midnight past and feeling the need to be around a few more people at the beginning of the year, we headed off to find a bit more celebration and wound up crashing some ad agency's company party. Nobody seemed to mind. The music was good -well, the music was loud and Anne wanted to dance and rather amazingly, when Anne wants to dance, so do Carolyn and I. There was a table of swag that we positively pillaged. The theme of the party was "Spawn or Die" and since neither spawning or dying was our desired outcome for the evening, there was nothing for it but to load up on t-shirts and coffee mugs. 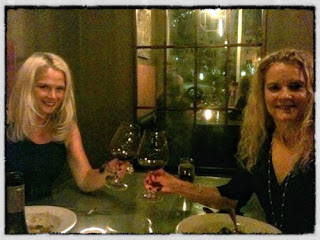 The next stop was a bar best described as "sticky". All the well drinks arrived in martini glasses with sugar coated rims, pretty much guaranteeing sticky hands and a sticky floor. The bar was white lucite and the whole place seemed sugar coated. If a fire broke out, the loss of life would have been terrible but it would have smelled delicious. I'm pretty sure the combined ages of everyone in that bar didn't total up to our three combined ages. Still, nobody seemed to mind the old people on the dance floor. The whole evening turned out to be generous in that way. A girl complimented me on my vest and I got to introduce her to the woman who made it, since I'm conveniently married to her.

As 1 a.m. passed, the bar got a bit "gropey" as fatigue, alcohol and desperation began to settle in on the crowd. We headed  a few doors down to another bar with our load of shirts, mugs and a newly acquired LED ice cube from the Sticky Bar. We closed out the place having to politely pry a 24 year old guy off Anne who simply refused to believe she was older than his mother. As we headed back to Anne's, I thought about the perks of age. A couple of those perks are experience and a measure of wisdom. Carolyn and Anne looked good. I mean, really good. they can dress well and use makeup not just to mitigate the effects of time but to look beautiful. Carolyn has a Master's in costuming and both of them had decades to learn what looks good on them. Most of the young women we saw over the evening were trying but seemed to be victims of a sort of closed loop fashion culture and conflicting body types. They bought dresses that they thought made them look good and shoes that were "fun" but  the outfits came off a bit trashy, not sexy and they didn't know how to walk in heels - Anne can freaking sprint in terrifying heels - so they sort of hobbled around looking kind of garish and top-heavy;  an effect amplified by many of the women being overweight.  You can be large and beautiful but not when you're cramming yourself into a dress designed for someone who weighed 120lbs. Going up a couple sizes doesn't fix things. It really doesn't.

I know that sounds mean, but I'm stuck on the truth that we had 20 or 30 years on everyone around us. We are healthy, fit, and carry with us a staggering amount of combined experience. I don't know any of the people that frequent these bars. I don't know their stories. I don't know what their hopes and dreams are. Lord knows I was probably a bigger wreck in my early 20's than any of them. But I wanted to tell them... What?  Lose some weight? Get some exercise? Get outdoors more often? Find a job that you don't hate? No. That's just mean and self righteous. I wanted to tell them that they will be us in a couple decades and who that person will be will be a product of what they do between now and then. I wanted to tell them that now is the time to start creating that person.

But nobody wants to hear advice from Old People, especially on New Year's Eve. So instead, as we left the Sticky Bar, I turned around, smiled and waved. They smiled and waved back at us as we headed out the door, down the sidewalk and away through time.