Echo Red to Red Round 4 - The Wind Edition 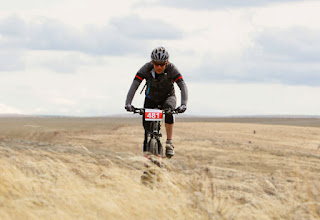 "Right now, this is worse than childbirth."

This according to my sister, who imparted this truth to a course marshal while laying on the ground - having actually fallen off her bike with crippling leg cramps with only about 3 miles to go in this 22 mile bike race. While Mallory was down for the count at the aid station, Joe was laying in the first aid tent at the finish line with his heart rate stuck at over 200 bpm as a result of his arrhythmia kicking in 30 minutes into the race.

I'm not, strictly speaking, in the doghouse with my family for convincing them that this was a fun race to do. Joe's team decided to do it without any input from me.  I don't think I ever said to my sister: "Mallory, you should totally do this race. It's just your kind of course. 17 miles of twisty single track filled with quarter mile climbs and rocky descents in the middle of the Oregon desert with no trees anywhere. It's so you! You would dominate your class, finish smiling, and probably crush my best time in the process."

I'd remember if I said that, and in the off-chance that I forgot, I'm pretty sure Mallory would be reminding me right about now. 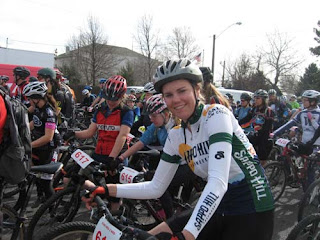 Maddie didn't want to do the race at all. She'd been skiing all week at Mt Hood, had crashed out of the slalom the day before and was pretty shelled. But Mallory and Maddie were close to the race coming off Hood and I had been going on about how much I liked the race over the past 3 years, so I suppose it seemed like a good idea at the time. The weather looked pretty perfect too - overcast but warmer and no rain predicted.  Besides, it is a fun race to do. The trails are excellent. Challenging without feeling life threatening. You'll never race in scenery like this anywhere else. Open, barren, but beautiful. And the town really rolls out the welcome mat. For one day, mountain bikes own the place.  On reflection, one heart attack and a new experience in pain is a pretty normal Saturday in our family anyway.

I am kind of in the doghouse for pedaling right by my sister while she was doubled over with cramps somewhere on the course. I'm not sure where because I really didn't see her.

Some people might understand missing a woman dressed in brightly colored spandex, leaning on a mountain bike, in broad daylight, in the middle of the prairie, as the definition of "not very observant", but keep in mind a few things:

I'm pretty sure by the time I passed her, I was mired in my own cramping hell, watching my average speed drop and my hopes for a good finish fade away. This was my 4th year doing this race. I really wanted to bring it in under two hours. I just needed to knock 11 minutes off last year's time. I was in better shape, 10 lbs lighter and riding a 3 lbs lighter bike. It was an attainable goal.

Then the wind picked up.

And by picked up, I mean it went from 15mph to 25 mph with 30+ mph gusts. And it stayed there for the whole bloody race. It was a constant roar. We were pedaling hard going downhill just to keep moving forward. I'd like to say the wind pushed us uphill once in awhile but that never seemed to happen. Most of the climbs involved tight switchbacks and all the wind seemed to do was knock us off our lines and into the hillside. I was actually blown off my bike once! I have never, never, ridden a bike, much less raced a bike, in anything like that. 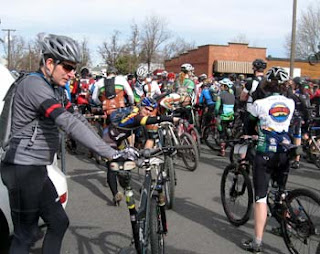 As much as I want to blame the wind for everything, I wasn't having a particularly good race even before the wind got really nasty. I tend to be slow coming up to speed and I was even slower than usual this time. It may have been the bad night's sleep or the 5 hour drive. It was probably a variety of factors. But my legs started cramping earlier this year and I think we were nine or ten miles into the race before I started to feel my rhythm and began to pick up some positions. Pictures of me at the start are really interesting. I look... dumpy. Carolyn is convinced my core is weak and I'm having trouble holding myself up. She may be right.

I know there are good races and bad races. I've had two in a row but I don't think that represents a trend. They were bad for very different reasons. Still, I depend a great deal on being just a little bit faster each year because each year I get just a little bit older and the time I start to really slow down is the time I have to face the reality of aging.

And I'm not ready for that. Not yet.

So, I'll focus as much as I can on the positives. My hydration and fueling went pretty well. I was a wreck at the finish but I didn't bonk and could have gone farther. The leg cramps seem to afflict everyone but the pros. It's the relentless short, punchy climbs that do you in. There's simply no place to rest on this course. I did cramp, but  I was able to manage it pretty well. Keep hydrating. Keep pedaling. Try to get out of the saddle a bit to change the muscle group. It seemed to work.

And maybe the biggest positive: 547 racers! That's the biggest field the Northwest has seen for a mountain bike race since the Revenge of the Siskiyous back in the early 90's.  All kinds of racers too. Kids of all ages.

In the end I finished 2:28 - 17 minutes slower than last year. But I was 11 out of 28 in my age bracket, which I suppose counts as a strong finish. Joe's heart rate did return to normal and he ended up finishing 5th in Cat I. Maddie came in 2nd on the Junior course but was so embarrassed her dad signed her up as a junior, she didn't stay for the awards ceremony. Mallory rallied and finished the race in just over 3 hours.

It was a tough long drive home. Everyone stayed at our house before heading back to Ashland. I'd like to say a good dinner, good wine and warm beds fixed everyone up but I'm afraid this one is going to take some time. We're all starting to heal. I think Mallory will come to forgive me someday. Maddie will probably be relieved to head off to college in a couple years and do normal things. I'm still sore pretty much everywhere.

Can't wait for next year. I'm going to kill that course. I'm afraid I'm going to be killing it alone. I don't think I'll be able to talk the family back for another go without getting beat up. I can't really blame them.