Cascade Chainbreaker: Getting Dirty and Getting Faster 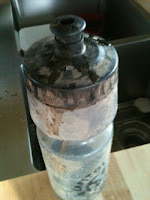 Last Sunday I headed off to Bend for the Cascade Chainbreaker. It snowed all through last year's race. Absolutely lovely but miserable for the poor spectators and volunteers. Carolyn paid her dues last year and decided that turning over the garden was a better thing to do so she stayed home this time. This year it was in the 80's and dusty beyond belief. The dust coated everything even before the race and by the end of the race it had covered all those bits of everything that you had forgotten about when you thought it had covered everything before.

Yes, I drank out of this bottle. It tasted great. If that disgusts you, please consider that I looked like this at the end of the race: 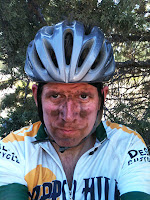 Pretty nasty. It got worse as you panned down but I'll spare you that.

Disgusting is a matter of perspective. Especially when you are really thirsty and just as filthy as the bottle you are drinking from.

I was going to tell you what happened when the dust settled, but the dust never settled, so let's just say there were some remarkable takeaways from Sunday's race once I had rinsed enough dirt off to see where I was.

And maybe most amazingly, all that stupid pedaling in the barn, slogging up fire roads through the snow and around shooters and packs of dogs up in my hills is finally paying off. I got on the podium! Second out of 15 in my class. It may not raise an eyebrow with the hard men in Cat I or II. There are house pets that could probably finish the race faster than I did.  But it's been a long, four year journey from being out of shape, to fit, to actually being faster than my peers. This was the best race I've ever had. I had a strong start and stayed with the front of the pack for the first few miles and could have hung in longer if I hadn't fumbled a rock garden and dropped five places. I finished less than a minute behind Brian Hart Sr who had his first podium day too. I don't imagine there were two happier racers that day.