Everybody in the Pool! 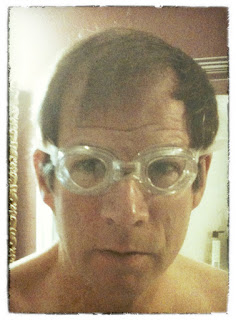 As a tribute to Carin, a bunch of us are going to do a sprint triathlon in April - the unfortunately named "Beaver Freezer". She and her mom did this race in the past. It's put on by the OSU triathlon club, the club she was riding with when she died. It's a fitting tribute. In that fog of loss and despair, this seemed like a reasonable thing to commit to.

When I say "reasonable" I'm victim of an anchoring effect. Sprints are shorter versions of the classic "Ironman" triathlons. Full triathlons are composed of a 3 mile swim, a 100 mile bike ride and, oh yes, a full 26 mile marathon. By contrast, sprints are a much less bat shit crazy 500 yard swim, 12 mile bike ride and 5k run. So by that comparison, yes, it's reasonable. But compared to sitting on the couch and catching up on "Dr Who",  it's still on the bat shit crazy side of life's balance sheet.

The biking part I've got dialed. The running I'll need to work on but I've got a wellness trail right outside my office and I think in 5-8 weeks I could get myself up to 5k without too much trouble. The swimming on the other hand, is a bit daunting. It will take place in one of OSU's pools. I've heard pool-based swimming segments of triathlons described as "fist fights disguised as swim meets". The logistics of moving hundreds of competitors of varying speeds through 20 laps invariably ends in chaos. Even in the best of circumstances, my relationship with water has grown rather distant since those long gone, hormone driven summers during my high school years when I pretty much lived in the Esopus creek at the Marbletown recreation park. Back then I went through all the Red Cross swimming and lifesaving programs and while my love life and academics were the usual male teenage train wreck, I could swim a mile easily and turn a pair of jeans into a working life jacket.

Last spring's trip to Calistoga proved that my swimming prowess had left the building along with my youthful enthusiasm for life and my faith in the basic good nature of my fellow men. I am clearly going to need to put some work into re-learning how to swim.  Fortunately, I work at a college. Learning goes on a lot around here. We have an aquatics center too. Salvation is right at my doorstep!

I began by emailing the swimming coach to get some important details like when it was OK for staff to use the pool and where the entrance to the pool was. That last bit was important. In the 13 years I've been here, I've never been able to find the entrance. I was beginning to think it's sort of like a beaver lodge and you somehow enter from underneath. Gary told me when it was open and said something about it being "through the men's locker room" in the basement of the HHPA building next door (I was right about the beaver lodge entrance). I wasn't sure what he meant but figured I could sort of grope my way to the locker room and ask directions from there. I purchased some proper swimming trunks and a pair of goggles and on Monday night I headed over to Linfield's swimming pool to reacquaint myself with the life aquatic.

"Who the hell designs a building with an entrance that's in the showers at the back of a bathroom in another building?"

He didn't seem very interested in discussing the finer points of architecture with me so I ventured off through the showers. Turns out he was right. I found myself poolside. As I pondered how spectators for swim meets entered the building (women's locker room showers?) I looked the place over. There was a rather bored student lifeguard, two students doing some pretty intense training in the first lane and an older heavy set guy doing some laps in the third lane. The whole affair seemed rather somber. I somehow expected a more festive atmosphere. I remember swimming being fun. I expected balls to be flying around and people splashing about. This looked like a public pool run by the Taliban.

I hadn't really planned much farther than this point. I watched a few YouTube videos showing proper freestyle technique and paid extra attention to the part in "Lost in Translation" when Bill Murray is doing laps. That was about it. Well, I came here to swim. I better swim. I put my goggles on, eased myself in to the shallow end and launched myself down the lane.

Several days later, as I'm waiting for my muscles to stop cramping and my sense of smell to return, I have a few questions for people who do this for fun on a regular basis:

How can you endure this kind of pain over and over?
20 minutes of laps and I felt worse than 8 hours at Test of Endurance! I'm not talking about the "feel the burn" kind of pain. I felt like I'd been beaten with a sack of oranges.

What is it like to suffer in your world?
Never mind. I don't want to know. I couldn't even begin to contemplate how horrible it must be if this is what you define as "fun".

How do you move forward?
Swimming looks like it's about propelling yourself forward but all I seemed to do was struggle to keep from going down. The few times I tried to do a crawl it was like I was digging my way to the bottom of the pool. I certainly livened up the lifeguard's evening.

How come your not dead from ingesting pool water?
I must have swallowed a quart of it and I'm using the term "water" in the loosest sense of the word. This is a college pool. Do you know who swims in college pools? College students. College students are the dirtiest creatures on the planet. They pack all the influenza, strep, and bronchitis of an elementary school plus all the other infections and pathogens you pick up when the dating scene starts to get interesting. Oh, and I don't think they shower any more. How do I know this? 40 sweaty guys in the locker room. Two old guys in the showers and I was one of them. You could almost see the sheen of Axe Body Spray on the surface of the pool. "But it's chlorinated!" you say. Oh, I know. They must have a railroad tank car of the stuff they're pumping into the pool to keep the bacteria under control. I think it's reacting with the Axe Body Spray and creating some kind of blistering agent that's destroyed my sense of smell. Two showers and a load of laundry later and everything still smells like chlorine. My dinner smells like chlorine. My coffee smells like chlorine. THE CAT BOX SMELLS LIKE CHLORINE! How am I going to do this for three months?

I know. I'm over-reacting. I was asking too much to think that after a 30 year hiatus, I could jump in a pool and do half a dozen laps and not pay for it. Considering how difficult it was to just get in the building, I probably should have walked to the edge of the pool, pumped my fist in the air, turned around and left. I'll get more confident and the pain will subside.

College students really are filthy though.

Sierra Koral said…
Congrats on signing up for your first triathlon! When helping my husband prepare for his first triathlon last summer I had to give lots of advice about the swimming. Expect to get hit, kicked, punched all over, and hope it doesn't knock your goggles off. I've never actually done a triathlon in a pool (laps anyway, I did one in an outdoor water park "river" pool) so I don't know if this would work, but if you can choose to stay behind, start at the end of your group, it will help you avoid much of the rush and craziness. Bring an extra pair of googles in case the strap breaks just before you start.

And breathe all the time. I found Erdem would hold his breath when doing his freestyle strokes and then try to get all the air out of his lungs and more oxygen in when he lifting his head above water. You can breathe out slowly during the strokes, and your lungs will be empty, ready for a large gulp of air when you turn your head for air. Playing with how many strokes you can get without taking a breath of air is a "mental game" you can play during training. Laps can be boring, so you have to do things to challenge yourself. Like decide how hard you're going to swim for each lap. 2 laps at 70% effort, then 1 lap at 90%, a final lap at 100% and repeat. Or watch the clock and see if you are able to keep a certain pace. 60-70 seconds per 25 meters or whatever. You can also use a kickboard for a while. It's training your legs and your abs and that was really challenging for Erdem.

Oh, and last piece of advice, running 5k may not be hard, but try it after biking for a few miles. Your legs will feel like they are on backwards. If you've ever been on a long horseback riding trip, and you get off feeling like your legs are a mile apart, you'll know what I mean. I recommend including some bike-to-run transition training in your repertoire.

Jonathan Pierce said…
Hi Sierra!
Thanks so much for the advice. I've heard the same from a few bike racing friends who do xterra events. Carolyn went with me to the pool the following week and it was much better. I was less panicked and I enjoyed myself so much more with company. Carolyn is an excellent swimmer. I didn't know this. She's giving me some help with my form. I've been warned about the bike run transition. I do quite a bit of that mountain bike racing so I'm hoping it won't be too traumatic. I'll definitely work some transitions in to the routine in February.
Congrats on your new family addition! You all look so happy. I'm glad life is turning into such a great adventure for you.
I'm sure you are right about the women. If the lifeguard hadn't stopped me, I could have seen so myself.
Happy New Year!
4:36 PM