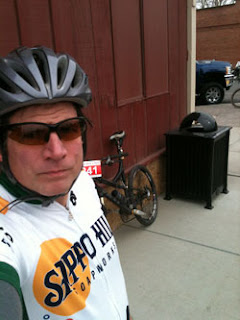 I actually did do the Red to Red race on Saturday. I probably should have written that report as soon as I finished the pre-race post. I gave it a day or two and ended up overwhelmed getting ready for the "Freezer" triathlon next Saturday. I doubled up on the swimming. I started running. I pulled my right calf almost as soon as I started running. I stopped running. Still more swimming. Then the pool closed for Spring Break. I stopped swimming. Got on the bike a few times trying not to make my injury any worse. Somewhere in the midst of all this, right about when we were ready to put the house on the market out of sheer exhaustion with the damp grey weather, Oregon turned around and threw us one of those glorious weeks of warm sunny days, so we charged outside to knock out as much yard work as we could before the weather changed again. It's still nice out and I need to go take the road bike out for a spin and try a short run right after. So I'm afraid my race report will be rather short.

I didn't do particularly well.

I wasn't really surprised and I wasn't really that disappointed. That cold I had crushed any structured training leading up to the race.  It was my first Cat II race as well. I staged myself in the back third of the field and that's about where I finished. One unexpected aspect of the race that took a surprising emotional toll was getting overtaken by the CAT III racers. They start 10 minutes behind CAT II and do the exact same course. The fastest CAT III racers were certainly going to finish 30 minutes faster than me so I should have expected this. I've overtaken CAT II racers in past races here. It still came as a shock when dozens of riders began to overtake me about halfway through the race. Having several riders overtake you, trying to hang on to their wheels only to have several more riders overtake you really saps your enthusiasm for the task at hand.

There were, however, some very positive things that happened. Camping the night before made for a nice leisurely morning race day. I found a great parking place close to the starting line. I had a great breakfast at the Echo firehouse put on by the local Kiwanis club. I had a nice easy warmup.  Chatted with Brian Hart who was skipping the race to follow one of his youngest on their first bike race. I even got a hug from my friend Melissa Norland who was taking a break from this race to ride with her son in his first mountain bike race. I sort of felt like I should go find some kid and sign them up for the junior race so I could skip the race and follow them around. It's what all the cool people are doing this year! Despite lacking a child to race with, this is the first time I've really felt part of the bike racing scene. People know me. I have a team. It's nice to feel a part of something. I've been bouncing off the bike world all my adult life so the change is really welcome.

All around, people were without fail, very polite. Civility in the face of a bad race day takes some of the sting out of the experience. I also learned my latex tube setup worked amazingly well at preventing flats. This race is famous for a thorny bush called "puncture vine" or "goathead" that is everywhere. I've watched racers tires go flat on the starting line and blow out during the neutral rollout on pavement. Most racers run with tire sealant. I was worried I'd just been lucky the last 4 years but this year I was off the trail letting riders by so often at one point I had an entire puncture vine bush get tangled up in my back wheel and I had to stop to pull it out. No flats.

I had no trouble with the new technical part of the course. I cleaned all the bridges and obstacles. I didn't go over any cliffs, and I didn't hold anyone up. The first 10 miles I was actually pretty competitive. It was one of those occasions when I was able to get out of my head and just ride.

I also finished the race without the usual crippling cramps. I think the carboloading and hydrating ahead of the race had a big part in that. I also think my base fitness level is better, even if I couldn't train as much as I wanted, I was still in better shape going in to the race than I've been in years past. I faded, but I didn't cramp. The new course did offer longer climbs and descents which provided an opportunity to rest and fuel and I'm sure that helped too.

The run-in to the finish was pretty good too. After the aid station I started to feel better and began to attack the course in bigger gears. The river of Cat III racers going by me had subsided to a trickle and I managed to stick with a block of riders for the last few miles which ended in a beautiful section of twisty  single track that emptied out to the trailhead and the ugly dirt road climb out of the trail system. I got on the wheel of a single speeder who pulled me up the hill. A third rider got on and we pushed down the road back to pavement. On the long downhill back to town, I pulled out front, the other riders were right on my back wheel. I knew they would pass me before the finish. I just didn't feel like sitting back and the earlier group effort probably shaved 30 seconds off my time. When they passed me on the bridge, one guy said "Thanks for the pull!".  As I said, unfailingly polite. I saw Joe waiting for me on the bridge. I was the last Sappo Hill rider in. But that was OK.

The most amazing thing that happened, occurred right after the finish. As they were peeling my timing chip off my number plate, I noticed my CO2 inflation tool for fixing flats had fallen out of it's harness on the seat post. I commented to Joe that I'd lost it. At that exact moment, a little old guy on a road bike with an impossibly low seat rolled up and said "Did you lose your air pump?". I said I'd lost a CO2 cartridge and head he reached in his pocket and pulled it out of his pocket. 26 miles of racing and it was my lost tool. I have no idea where this guy came from, where he went after he gave it back, whether he was racing or not, or where he found it. I decided he was my guardian angel, who somehow came into being to watch over me during the technical sections. Once I was safely through them, there wasn't much to do except pedal along behind me picking up my trash. I'm a little disappointed I'm slow enough that my guardian angel would be an old guy on a road bike that didn't fit him. On the other hand, I'm happy to have my cartridge back.

So, next Saturday it's down to Corvallis for the Beaver Freezer triathlon. If I'm up for it, I'll have a go at Mudslinger the next day. The weather looks awful! Can't wait.

Nancy Tarczynski said…
You know this makes me feel like such a wimp when I complain about my aches after only weed wacking my mom's back yard.