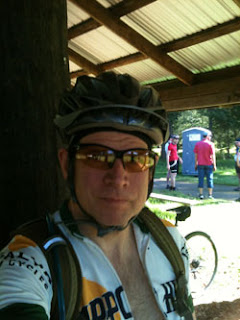 I've been lagging putting in base miles this season. A combination of travel, triathlons, bad weather, and house projects confined me to Saturday rides and mid-week intervals on the trainer. As a result, I'm pretty strong and the winter weight is coming off, but I've got no endurance. So, with racing season in full swing next weekend, I decided to do what most half-hearted weekend racers do about now. I tried to cram all my distance into one genuinely insane group ride. I'm stupid.
The Rapture has been put on in May since 2011 by VeloDirt, a Portland based group of gravel road riders, in honor of Harold Camping's failed prediction of the end of the world. It's an unsupported 69 mile dirt and gravel road ride that crosses the coast range twice. There's no signup sheet, no check-in, no number plates. The route has no services, no potable water, no cell reception, and no easy exits for the first 60 miles. It travels over a spider web of logging roads, many of which are gated, so no sag wagon either.
The VeloDirt website summed it up nicely: " If something goes wrong, you’re fucked. "
On the plus side, it was someplace I'd never been, and it's exactly the kind of riding I do around my house -  just 30 miles north. I'd actually run in to a couple of VeloDirt guys up on my fire road system a few years ago.  I usually  do this sort of thing by myself, I figured riding with a crowd of spandex clad social outliers pedaling in the woods would be at least a little safer than my usual training rides.
So, last Saturday I drove out to the Flying M ranch, west of Yamhill, where the ride started and finished and met Donnie, who organized and mapped the route. After about an hour, roughly 50 other riders had pulled in to join in the fun.
I should take a moment to point out that gravel road bike riding or "gravel grinding" is A Thing. And like other Things in the cycling world, it has it's own aesthetics, guidelines, and values that, to many outside of the that world, would seem a tad eccentric. In fact, I would go so far as to say Gravel grinding floats even higher than cyclocross in the stratosphere of odd things to do on a bicycle.
There are no rules to it, but as far as I could interpret the guidelines for doing a gravel ride, the more ill suited your bike was to the task at hand, the better. You start with a road road bike. If your bike was vintage or hand built, that was a bonus. It should be made of metal, not carbon fiber - steel was best. You should have racks. Lots of them. You should use water bottles. If you have water bottle braze-ons on your forks, you are a God. Dress code? Skin tight neon spandex was rare. Understated  wool jerseys and shorts were the way to go. Wabi Woolens was one of the ride sponsors. I can't really fault them there. Modern wool bike clothes are wonderful. Nevertheless, as I stood there with my fully suspended Yeti dripping with carbon fiber, my Sappo Hill kit, and a hydration pack,  I had the novel sensation of feeling like a fashion victim at an organized bike ride.