Truman Capote said: "That isn't writing at all, that's typing". This is one of those posts. It's mostly for me because I want to remember how all this transpired when I'm too old to do it again. For those of you looking for something meaningful or funny, you can skip to the end. 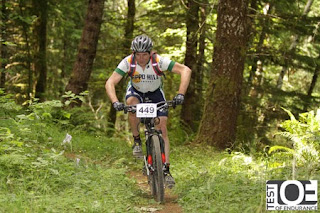 For those just tuning in, The Test of Endurance is a 50 mile mountain bike race run outside of Corvallis. Mike Ripley has been putting on this event for seven years. This was the last year for this course and distance. He's changing to different trails and distances next year. I haven't asked him why. Maybe with a 100 mile race and a 24 hour race in his season, it's one too many long events to promote. These must be a bear to put on. Multiple aid stations, longer distances and greater chances for rider injury make shorter, multi-lap events much more appealing.  Maybe endurance racing distances have grown to the point that a 50 mile "Test of Endurance" seems underwhelming.

That's not to say it's easy. It's a mix of fire roads and trails with 8000' of elevation gain. My history with this race is as follows: 2010; missed the 1st lap cutoff. 2011; Didn't start. 2012; bonked hard at mile 28 and limped to the finish in 8 hours, 21 minutes. Let's just say my relationship with this race has been difficult. It's worked me over emotionally and physically to the point that even finishing it looks like a long form of defeat. But like a level in a game you're stuck on,  a puzzle that leaves you stumped, or a doomed relationship you can't let go of, I keep coming back to try to figure it out.

This year my fitness seemed to plateau back in May, so I concentrated on diet, race prep and hydration - all areas I seem to screw up and all things I can manage if I just do my homework. I got the Yeti as ready as I could. The poor bike needs major work but given my budget and time window, I settled on new rear derailleur cable and pulleys, re-greased bottom bracket, new handlebars and I treated myself to a new pair of gloves. I swear, I must have been a rich old lady in a past life because I spend more time hunting for the perfect messenger bag or bike gloves than I do the bike I ride. The gloves sort of make sense. That's the interface where you do most of your bike control. Grips and gloves matter and they're very individual choices. The shoulder bag thing, no idea. Don't ask me about the leg shaving either.

Anyway, with my legs silky smooth and  the bike as ready as it was going to be, I spent the day before the race getting organized, and eating and drinking as many grams of carbohydrates as I could find. There's a science to carbo loading. I'm supposed to consume around 700 grams of carbohydrates 24 hours before the race. I'm hitting a bit short of that but not by much. And I keep the eating and drinking up through the entire race. Anyone rolling up on me during the race would probably see me chewing or drinking and pity the aid stations I ate holes through. Some racers can run on a couple of gels and a bottle of electrolytes. Not me. I'm a rolling pie eating contest.

An 11 A.M. Saturday start meant I got I nice long night of sleep with plenty of time for the hour drive to the race. It was a small field this year. 125 racers with 40 or so doing a 62 mile course over Mary's Peak. The weather was perfect. Mike did a neutral roll-out mass start which I really like. The fast riders sort themselves out early and there's less bunching. Everyone was in a good mood. At some point the neutral roll-out turned into proper racing. We had a couple fast miles and then we started 10 miles of mostly climbing. The race was two 23 mile laps with a few miles of fire road back and forth to the start/finish. I settled into a nice pace that was, regrettably, about a mile an hour slower than most of the field but I remembered blowing up last year and I didn't want to repeat that experience. It's hard to explain. It's not that I was taking my time. It's about finding rhythm and pace over a long race. I'm usually not very good at doing that. This race was going better.

My mental race was going better too. When you're having a bad race that's five, six or seven hours long, you have lots of time to be lost in all kinds of mental Hell. "Where am I?" "God, I suck at this!" "How much longer is this climb?" It's a bad, bad, place. I've spent quite a bit of time there. But I've done this course three times and most of it uses the Mudslinger trails so maybe half the course I'd been over more than a dozen times. I knew where I was and what was coming for pretty much the whole race. That made the hard sections manageable and I could concentrate on important things like eating, how nice my new gloves felt, and that Keen shoulder bag that would be perfect for the iPad.

The first lap felt slow but I dropped out of the Panama Canal trail to the halfway point 10 minutes faster than last year. Go figure. I rolled up to the aid station and reloaded with electrolytes and food. I had a nice quick visit with Brian Hart. His kids were racing and it was great to see a friendly face and chat for a minute. I got out quickly and started lap two. Three miles in I knew it was going to be a much better race than last year. I was climbing strong and I felt good. By this time last year I was walking.

I don't want you to think I was dominating the field. I wasn't. There were probably less than a dozen riders behind me as I went in to the second lap. What mattered was I wasn't failing because I didn't do something simple. Still, the truth is, I'm kind of slow for Cat II. When I overtook people, it was because their bikes or their bodies were broken.

I did get to pay back a bit of a Karmic debt. A few miles before the most remote aid station I caught up to a woman who was stopped and suffering from cramps. I gave her some Endurolyte capsules and rode on to the aid station. Maybe five minutes after I got there she pulled in looking pretty beat. She made some comment that she must be the last racer. I pointed out that if she's this far into a race and I'm ahead of her, she's having a bad day and I was sorry. This is actually kind of true. I'm developing a reputation as the Grim Reaper of bad race days. If you see me on the course, you're pretty much done.

I got out of the aid station ahead of her but she overtook me on a trail section. I caught up to her on a fire road climb and she was coughing. I asked how she was and she said not good. The cramps were gone but she was light headed and feeling really strange. We ended up riding in together. Last year, someone did that with me and it made the last 10 miles of the race so much better. We talked and the miles went by. It wasn't that I was expecting to do CPR if she crashed or stopped and passed out. Mostly, our pace was close to the same and it's just better not to be alone this late in a long race. And having something or someone to help fill up the time as you limp home after a bad day, makes a difference.

The thing is, she was still unbelievably fast on the technical trail sections. I'd catch her on climbs and let her go ahead on the trails and she'd disappear. I was in the kind of awkward situation of having to work to keep up with the person I was supposed to be keeping an eye on. I probably knocked 5 minutes off my time riding with her. We found the Collarbone trail which begins the descent to the end of the race. I hung on to her wheel as best I could. I was a little disappointed to learn she was scrubbing speed on the trails because she felt so bad. I thought I was getting the hang of it.

We dropped off Panama Canal again and one of the Hart girls was waiting on the road. She rode in with her and I pulled a little ahead while they talked and we rode the last couple miles to the finish.

I rolled in at 7:08. An hour and 12 minutes faster than last year. I also managed to take third place in my age bracket. A podium spot, albeit one acquired as much by low attendance as effort, was still an unexpected bonus.

What did I take away from this race? Some odd things. Ice cold Coke is the elixir of the gods during an endurance race. I can't stand it any other time but nothing tastes better after 30 miles in the saddle. I was also reminded that I ride better when I ride with someone. I'm more willing to risk a crash if I'm not alone. I cleaned the Root Down trail for the first time during this race because a woman having a bad race day said "You can do it!" And some dumb male part of my brain keeps saying "if a hundred pound girl can do it, so can you".  Sometimes the dumb part of my brain is also right.

But what I will remember most about this particular race was sitting on the ground by myself, eating a burrito, drinking a beer and feeling at peace. I wasn't embarrassed by my finish. I'll remember talking to Brian Hart and Mel Norland and her son. Her son did the 25 mile race and took second. He's 10 years old. I've said it before: I walk in the shadow of giants. Mel looked like she just drove up from a day of shopping. She'd crushed the 62 mile race took first and finished with enough time to get cleaned up, changed into street clothes and have a beer before I even got across the finish line. Her husband Trevor took 4th in his bracket. These are the people I know and admire and when I got on the podium and got my medal, they cheered for me and they meant it. I was humbled, and I felt like I belonged. It was a good day.