Breakfast of... DEAR GOD THE GRANOLA'S ON FIRE! 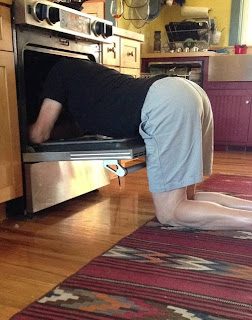 I sometimes wonder if we're the only people who live in a funhouse world where bees take over your wood stove, raptors fly in to your bedroom, bike rides require shooting earmuffs, cats weigh 23 lbs and don't know how to clean themselves, and vacuum cleaners are gateways to Hell. Does this all happen to you and it just doesn't seem important enough to tell me?  I'd love for you to share. I'm starting to worry...
This past Wednesday our evening started typically enough. I got home from work, Carolyn was just putting the granola in the oven.


OK, let me stop there. That's normal around here. About 3 years ago Carolyn made granola from a magazine recipe. It was so good she kept doing it and now my mother and sister are making it as well. It's mostly mixing dry ingredients and baking. It's dead simple. It's posted at Epicurious. You should try it.
Anyway, it's midweek so we're having a simple dinner. Hamburgers. As normal and all-American as a meal gets. I open up some wine, head to the pantry and get out the meat grinder.
OK, let me stop again. We buy chuck roasts and grind them ourselves. If you're the sort of person who includes beef in their diet and you dream of that perfect hamburger you had at some trendy restaurant in the 90's that cost 15 bucks, go buy a good chuck roast, cut it in to cubes, dig out that ancient meat grinder that's probably been kicking around in family kitchen drawers since your great, great grandparents settled the west, clamp it to the counter, and grind your own meat. It's good exercise and honors the animal that gave its life for you more than buying some e-coli laden meat product that's shipped in a tube. Gave the meat grinder to Goodwill? Shame on you. Your ancestors are weeping. Toss the cubes in the food processor. give them 10 quick pulses and your ancestors might forgive you.
So, the beef is ground, the granola is cooking, we have a nice French Rosé opened and all of the sudden there's a blinding flash and pop from the oven. I'm not overstating this. It was bright enough to cast shadows in the kitchen. Carolyn jumps 3 feet in the air and karate chops her wine glass in half in a move that would have made Bruce Lee proud. I'm not sure why she felt it was necessary to karate chop her wine glass in half, though the way our fixtures and appliances have been turning against us lately, it might have been a smart preemptive strike.
Wine and glass are everywhere. Flames are visible through the oven window. I turn it off but it's still brilliantly bright in there and making a sound that I recognized from my theatre days running carbon arc follow spots or stick welding. I yelled to Carolyn to kill the breaker in the pantry.
Ten minutes later we're sitting on the sofa staring at a kitchen that looked like an I.E.D. went off in there. The oven was out. It was also dead as a post. The heating element had blown but I was going to need to pull it before we could flip the breaker back on. We opened another bottle of wine and cleaned up the debris. Carolyn finished the granola in the toaster oven. It tastes fine though it does have a bit of an ozone note on the finish. We determined there was no glass in the ground beef so we fried up a couple burgers, remembering we needed to use matches to light the burners on our burned out hulk of a stove. They still tasted better than any burger we've ever had at a restaurant but I don't usually leave a restaurant thinking I need a shot of whiskey and a cigarette to calm my nerves before my next meal.
The new element arrived by FedEx today so I'm hopeful the oven will be back on its feet though I'm starting to dread the thought that I promised Carolyn I'd make meatballs for dinner.

Nancy said…
I love your life
Giving me giggles when I need them
5:42 PM