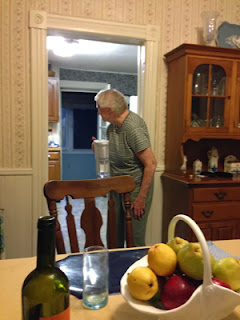 I’m sitting on the bed in the guest bedroom at my in-laws in Waterford. The bedroom is about 8’ along from where the house begins to slope toward the canal, dropping about a quarter of an inch per foot as you walk toward the back of the house. The house has been sloping long enough that doors and windows have been trimmed and re-trimmed to continue to work as the slope gradually increased over the years.

The slope begins as you enter the dining room. Two decades of meals here have been punctuated by oft-repeated stories about having to dam up gravy with mashed potatoes to keep it from running off the plate. They eat a lot of bananas here largely because it’s one of the few fruits that won’t roll away when you set it on the table.

Yesterday, while Merle and Catherine were at a GE retiree’s luncheon, Carolyn and I took over the sloping kitchen in their sloping house. Though she still bakes quite a bit, at 88, Catherine doesn’t cook much anymore and it felt good to dirty the place up, drink a bottle of wine, listen to some music, and dream about how we would fix the house up.  The back of the house would be leveled of course. Walls would come down. The old sun porch would be torn off and replaced. Carpet is torn up, plaster and lathe is torn out.  New wiring and plumbing, followed by insulation and drywall, mentally installed with such zeal I could also imagine Merle and Catherine’s furniture, dishes, pictures and photos being ground up and disposed of along with the old service panel and galvanized plumbing.

It feels cruel to write that, a terrible act of mental vandalism, especially now that I’ve moved to the living room and Catherine is sitting across from me doing word puzzles.  Merle and Catherine are very much alive and have no intention of leaving, nor do we have any intention of moving back to NY.  It’s partly habit – we’ve always looked at living spaces with an eye to what could be better. It’s partly being realistic. The house is old and in desperate need of some serious work. Carolyn’s parents know there’s no point in their doing that work.

It’s also something else.

Home is a place. It’s also a repository of memory and self. I have a small space in that repository in Waterford. Carolyn has a very large space. But the overwhelming majority of it belongs to Merle and Catherine. It's a physical form of memory theatre. As Carolyn’s parents reach the ends of their lives, we have to accept that this home, all that it meant to them, will cease to have that meaning when they are gone.  Imagining renovating their house is a way of trying to hang on to a home that will go away.

As we’ve all grown older, our visits to their home, the home Carolyn grew up in, have had the power of going to church.  Dishes and silverware are articles of faith. They are fixed. Everything has its place. Every glass, plate, book, all of it is in exactly the same place, year after year. And all of it has the power of memory. Merle can look at an oil lamp on a bookcase in his study and tell you about the relative who used to sell them door to door and spin that memory into a full branch of the family tree filled with the memories and experiences of all the relatives that made up that branch.

But like a church, when the faithful are gone, the structure loses its meaning. We can’t hold those memories for them when they leave us. We feel the power of what they meant and we know we can’t keep the thread of what the oil lamp or the inkstands or the old pots and pans in the kitchen, or the books or even most of the photos and Currier and Ives prints really meant. But we want to hold on to the vessel that contained them, because it hurts too much to imagine it all going away.

Carolyn made dinner. The house was filled with the smells of home made pizza. We laughed, enjoyed a great meal. We did the dishes. Afterward, Catherine put all the clean dishes back in their proper places.  This might be a memory theatre, but it is still their home.