About that woman I married...

Most of my social interaction consists of telling people about me or sharing my opinions about things I really know nothing about. When I'm not doing that, I'm usually wrenching conversations that might otherwise have led to cures for cancer or a grand unified field theory back to the subject of me. I mean, who doesn't want to know about my morning cleaning the cat box? You see my point.

So it was with some surprise I discovered that I was way more interested in the world of my wife this past week. She had gone off to Mexico with her friend Anne to an all women's surf camp called Las Olas. I had expected the "surf camp" part of the resort title was a pretext for laying on a beach, drinking margaritas and trash talking about husbands and boyfriends for five days. That would have been great. We could have talked over the fine points of good and bad margaritas and I could get back to talking about myself. 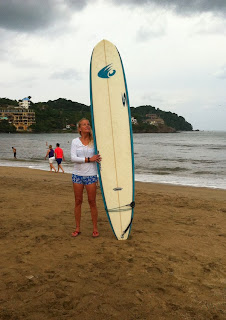 But I started getting texts about her progress. Then she told me she had learned to surf.

We're both from upstate NY. We grew up with surfing as the punch line to an ongoing joke about learning to swim in bodies of water that were a few hundred yards wide. But decades after we left NY, our Red Cross swimming classes, and those bad jokes behind, Carolyn went to Mexico and rode a wave.

I'm in awe because she made the joke real. I'm in awe because by any measure, riding a wave while standing on a board is really, really hard and she did it. We've spent this past week talking about the delicate balance between learning physical steps to a process and the internalizing of those steps and their conversion to movement without thought.

And I'm in awe because Carolyn is 61 years old.

Our culture has turned athletic old people into fetish objects. I think they give young people comfort as they grow older. Maybe they'll still do the things they did when they were young. Maybe they won't look like the old people they remember when they were children. Maybe time really doesn't win in the end. Maybe old age isn't so bad.

It does, and it is. It takes effort to hold back the years, even for a little while. Carolyn went through months of physical therapy to sort out persistent pain she carried in her 50's. She exercises and stretches to keep the pain at bay. We spent six months at the pool getting strong in the water together. She works hard at taking care of herself.

What's the reward for that work? She's enjoying thumbing her nose at the world's expectations of what a woman her age should be doing. It's one thing to look at athletes of a certain age as objects or symbols of hope and admiration, it's another thing to be that athlete. She owns her age like no one I've ever met. She's beautiful right down to the bone. She's curious enough about the world to say "Yes" to an opportunity to learn to surf and she's strong enough and smart enough to do it. She is also lucky to have a friend like Anne who took her down there. Anne's always reminded us to say "yes" when asked if you want your world a little bigger.  She was also lucky Las Olas had such good teachers. They're the real deal. Their tag line is "We make girls out of women". I might have suggested "We can get a 61 year old wine steward from upstate NY who learned to swim on a pond up on a board on a wave" as an alternative but it wouldn't fit on the website masthead.

And I lied a little bit. I wasn't surprised. She has always humbled me.

Tarczynski said…
something for me to look forward to
11:12 PM