The Oregon24 - Magic and Dust 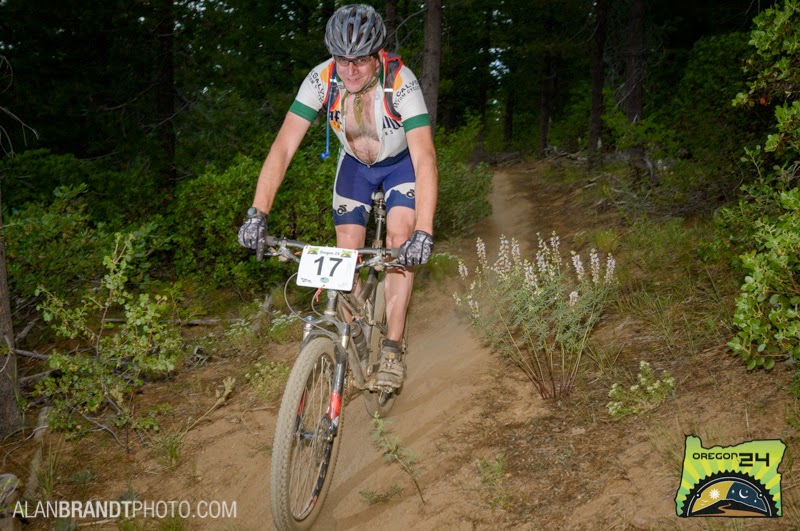 Last weekend I raced the Oregon 24 mountain bike race solo. Most people do this as part of a team so my insistence on riding it alone was widely considered a stupid thing to do. Physically I'm ok, but let's face it: peak fitness has left the building. Even if I was in top form, doing 10.5 mile loops for 24 hours sounds like the definition of madness. In some ways it was. Riding the same trail over and over, you get to recognize every single hill, turn, rock, tree. All those little details become your world. When a branch fell in the trail, it was a topic of conversation with my fellow racers until the time we came around again and it had been knocked out of the way. About 7 laps in, I thought a bike was coming toward me. My headlamp had reflected off a disco mirror ball hanging in a tree. I had passed it 6 times, never noticed it. How do you not notice a disco ball hanging in a Ponderosa pine in the middle of nowhere? I spent the remainder of the race wondering what else I was missing on a day to day basis?

This wasn't cheap crazy either. This kind of crazy costs money. By the time I was done with race fees, renting a trailer, renting a lighting system, buying huge amounts of food, and blowing a few hundred dollars on gas for two vehicles to get there, Carolyn and I probably could have found a nice 5 day package in Cabo San Lucas, airfare included. Carolyn thought it was a good idea though. She saw something in it. I sure couldn't let it go.

So there we were, me, Carolyn and her sister Janet, who was visiting us in Oregon for the first time, setting up shop in a vintage trailer at the Wanoga snow park. Nothing says "Welcome to Oregon" like spending three days sitting in a hot parking lot with the Worst Pit Toilet In The State, waiting for your brother-in-law to reappear from the woods, babbling about mirror balls and exciting new sticks. Yup, I set everyone up for a nightmare weekend in Crazy State Park.

Except it wasn't. It was amazing.

There are so many things I want to tell you about the experience of doing this but it's very hard to put into words. Maybe it's because it was never what it seemed to be. I was racing solo, but it was a team effort. Carolyn and Janet crewed for me and that meant way more than hanging around in a parking lot. They were supposed to be sight-seeing while I was clocking laps but instead they were out buying an awning for us because it was so hot. They prepped water bottles, made food, and rang a cow bell every time I came back. Carolyn knew cooling tricks from landscaping (wet bandana around the neck) and I iced hydration packs and kept a bottle of water on the bike to refresh the bandana. Most importantly, they watched me to make sure I was eating and drinking and staying on top of fatigue. I think Carolyn was more exhausted than I was Saturday night.

The race itself? I've never felt so at home at a race. It wasn't terribly technical but hard enough to keep you paying attention. There was 1000' of climbing each lap broken into two major hills. Both were tough but manageable. As a solo racer I had a big "S"marked on my left calf. There was quite a bit of discussion about what that stood for. "Sleepy", "Stupid", "Sucker" - the list got longer as the day wore on. Every racer who passed me, which was about all of them at one time or another, would say "Way to go solo!" Yes, the race was hard. It was also 24 hours of validation from fellow racers and the satisfaction of seeing things work out better than expected. Just this once I"m not going to be self-effacing about it. We had a plan and we stuck to it. Go out slow. Stay steady. Rest between laps. Eat and drink on a schedule. Manage the heat. Race to around midnight and get up around 4 am. It worked.  I clocked 9 laps and placed third with energy to spare. I beat everyone's expectations of what I could do, including my own.

And I was humbled. I was able to do this, to experience this. At 11pm I watched the dust hit me like snow on a windshield at night. I saw the sun on Mt Bachelor in the morning. On top of the last climb of the lap, I had the delightful, surreal experience of bumping into my friend Mel who was riding with her son. I got to know Dale, 7 years my senior, who took first in my category, and his wife who tap dances and takes care of him on these races and is so wonderful Carolyn had to give her a hug. I saw footprints on the trail - lots of them, and I was overwhelmed with gratitude that I could ride what others had to walk.

And all of the things that have been eating away at me this year - the world out of balance,  mortality, human frailty, sickness in friends and family - all of that, hurt just a little bit less because racing gives you that clarity. It focuses your attention on the present and doing that, helped me understand that the rest of life isn't going away and I'm not doing anybody any favors by moping about it. The best I could do was stop halfway through my last lap, on top of a butte where I had a few bars on the phone, and text my friend Nancy, the only person I know who could say "the doctor's visit went great" and "starting chemo next Tuesday" in the same message, and a text to my sister, who was in Hawaii with Maddie and the Chaves, remembering Carin. I remembered what struggle really is. I stopped being angry at life. I let the racers go by for a minute. They asked if I was OK and I said I was. And I was.

So, against all odds, I was at a sort of peace sitting in my folding chair next to our vintage trailer Sunday afternoon after everyone, and I mean everyone, had left. Carolyn and Janet had gone to spend a well-deserved afternoon shopping in Bend. The rest of the racers had packed up and gone home. I had finished my dinner of a Corona and a banana. Mike Ripely, the race promoter drove by and saw me and my antique trailer looking like Stanley Kubrick might have set me there to scare the crap out of him. It was even thundering. He stopped, and even though everyone had gone and he had work to do, we talked, and I told him what a great race it was. I can't wait to do it again.

Sometimes you just need to make that journey to Crazy State Park - the land of bad ideas and hair-brained schemes. You have to take a chance on something that feels like the right thing to do even if it doesn't pencil out. If you don't, you're just going around in a bigger, duller, crazier circles.

Jesse said…
Amazing effort. I've never done a 24 hr race bit you may have just inspired me.
2:30 AM