I usually write about mountain bike racing and cats. But because July was one of those months, a few weeks after getting all the dirt and dust off of my bike, my clothes and myself from the Oregon 24, I found myself dressed in white, sipping champagne and having a lovely dinner. I was sitting at a white table with white plates and linens with my wife also adorned completely in white. We were seated next to  roughly 500 other people dressed in white. You might for a moment, think I had actually died during the Oregon 24 and was reporting this to you from the all-you-can eat buffet just inside the gates of Heaven.

We were in fact, seated outside in an abandoned shipyard under the Ross Island Bridge on the outskirts of Portland which, on reflection, is equally improbable. But there we were.

We had sparklers too. 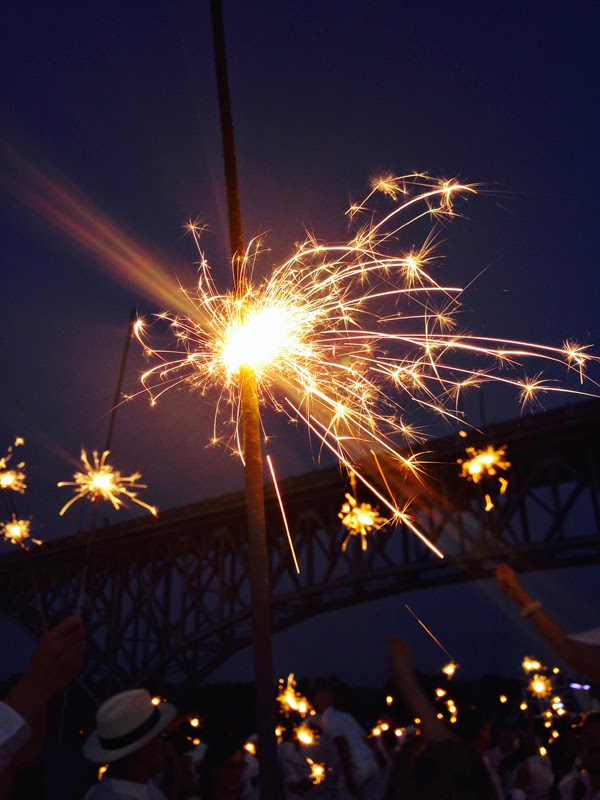 Dinner en Blanc, according to Wikipedia, is among the earliest examples of a "smart mob", a variance on a flash mob. It started in 1988 and has spread around the world. It works roughly like this: You get invited by someone who's been before or part of the organization that puts it on. When your invitation is accepted, you're given instructions to dress in white, bring your own table, chairs, food and drink to a designated location. From there you walk or in our case take a chartered bus to the secret destination for dinner. Everyone eats dinner, there's dancing for about an hour after dinner, you pack up and go home.

As a concept, I should have hated it.  Flash mobs originated as a form of protest and even in their most benign forms, they still tend to be disruptive, like everyone suddenly singing the Hallelujah Chorus in a shopping mall or dancing to "Thriller" in a subway station while everybody who wasn't in on it looks on in surprise and delight. Nobody notices that the silent message of these events is that where you are and what you are doing are inherently dull and lifeless and need disruption. Christmas shopping or commuting aren't terribly glamorous, but they're necessary and I don't want to elbow my way through a phalanx of tenors to get to the check out line at Ross Dress For Less when I have 5 minutes left on the meter. Where I live out here in the coast range, nobody would put up with that kind of public assembly unless it was an open carry protest and just this once, I'm kind of in agreement with my firearm enthusiast neighbors. Besides, I can't sing or dance. 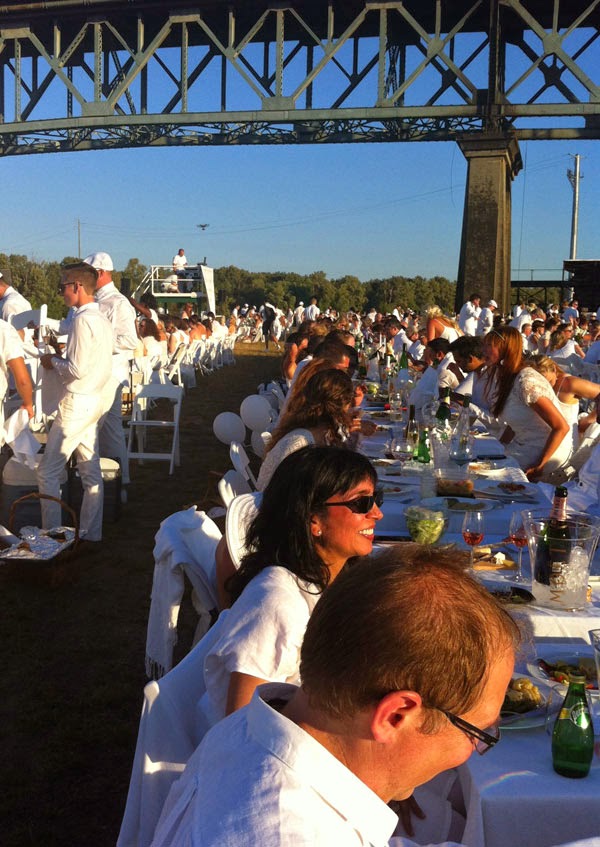 Dinner en Blanc was different. I may not be able to sing or dance, but I can eat and drink with the best of them, so it was really playing to my strengths. It wasn't disruptive either. Beyond being beautiful to look at, it was intended to affect the people participating more than those looking on, and at this particular dinner, nobody was looking on unless they'd broken down on the bridge and even then they would have had to lean out an awful lot to see us. We were, as much as possible in a large city, invisible.

For those of us participating, dressing in white had a remarkable socializing effect, like school uniforms. Where we came from, how old we were, who we knew, how much money we made, didn't matter.  It was pretty genius, as if the point was to be white to the point of vanishing. You could be dressed in Armani, your wedding dress, or like me, Dockers and Vans (and a hand-tied bow tie because when you're married to a woman with a Masters in costuming, that's how you roll). It didn't matter. We had to drag all our tables, chairs, food and drink to the assigned place too. I don't care how good you look, if you're dragging a folding table and a couple of chairs across an empty field, you look awkward. It's almost intentionally clumsy which leveled the whole experience. We all talked and laughed and quickly became friends because we looked so much alike, were struggling with the same loads,  and were so totally out of place. 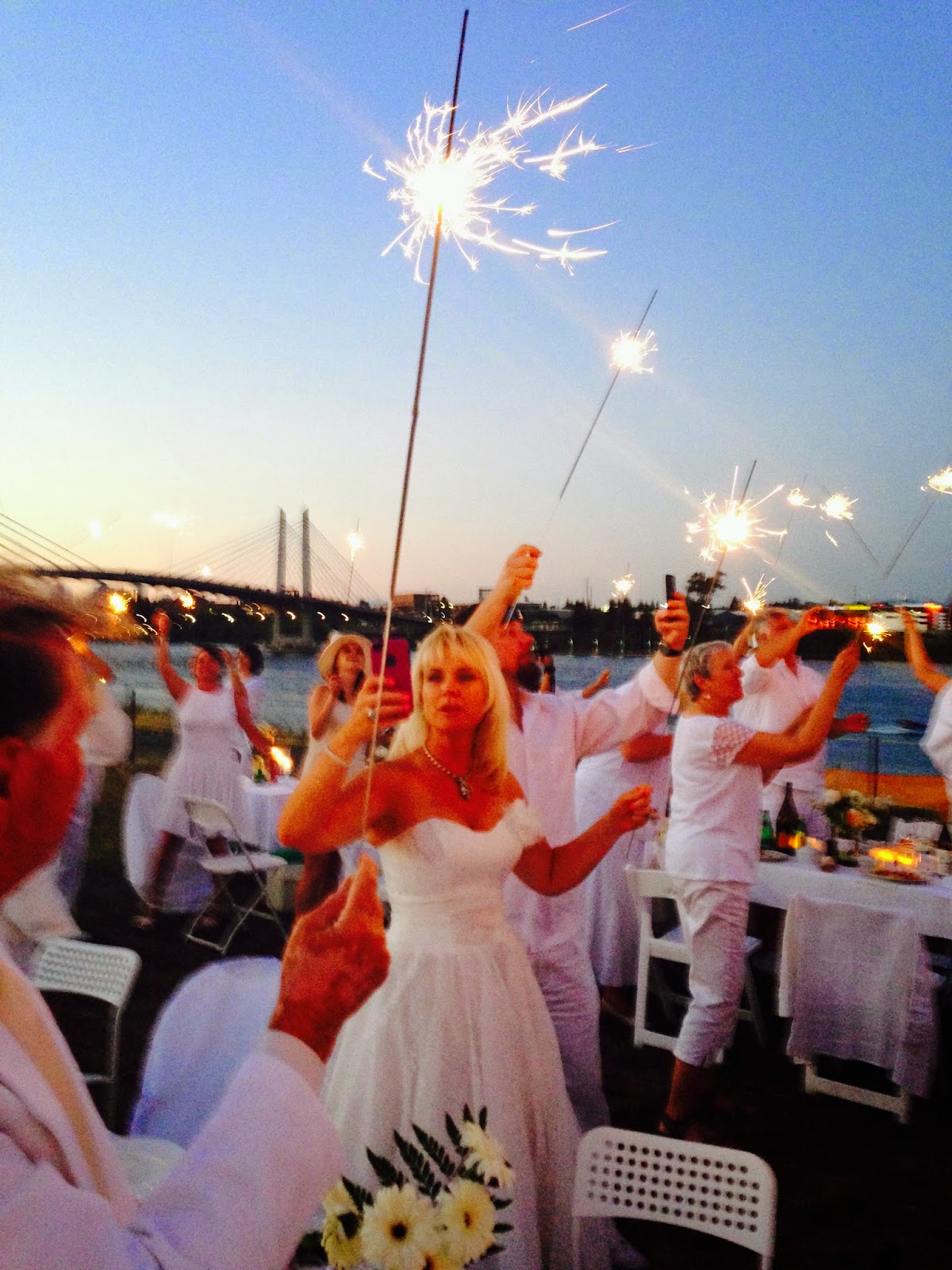 And it was beautiful.

Instead of pointing out how dull and dreary the everyday world is, it pointed out how beautiful it can be.  When we finished dinner and the sun set, we lit sparklers and waved them around like kids on the 4th of July which is when I realized that the linen napkins and tablecloths weren't an affectation. If we'd shown up with paper napkins and tablecloths, all 5oo of us would have burned up in a spectacular fireball. A true flash mob.

When the sun went down, we finished our wine and danced in the afterglow of the evening and it was so dark, nobody noticed how bad I was at it,  and when we got home our clothes were as dirty as my kit from the Oregon 24 because as lovely as we were, it was still a dry, dirt field and dancing kicks up a lot of dust.

Seeing that dirt it all sort of fell together for me. Dinner en Blanc certainly wasn't as physically demanding as a mountain bike race and I wasn't bleeding nearly as much when I got home. It did share with racing the quality of shared experience and the opportunity to see the beauty of a moment and a place by stepping out of yourself. And like racing, the people were the most beautiful part of all. Stumbling, awkward, elegant, and kind.