We cram quite a bit into our weekends.

This one was unusually warm so I was planning on getting some winter prep stuff done in the morning and then get a ride in in the afternoon before it got too hot. I made granola in the morning. I ran the box scraper up and down the driveway ahead of getting a load of gravel on it. I sent Carolyn off to work and started to do a little scraping on the front porch railings. I figured I could scrape and wash Saturday and throw some paint on Sunday. Piece of cake.

Getting to the bottom of the 4x4 post that holds up the right corner of the porch roof, I poked at a blister of paint. Their was air under it. And dust. And very little structural wood. I was able to push my chisel all the way through the post. The bottom 3' of it were past rotten and well into compost. I've built boxes out of styrofoam and 1/8" plywood that had more structural integrity than the post that was supposed to be holding my porch up. If too many finches landed on the feeder attached to it, it might break off. 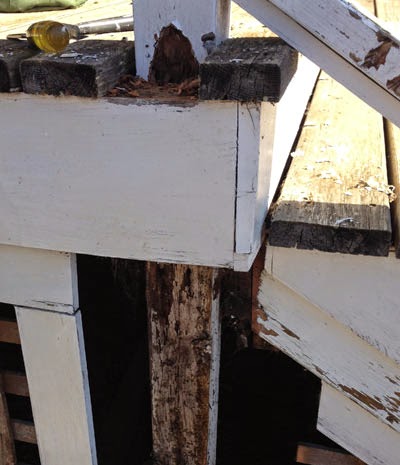 I stood there for a moment. There was a slight hissing sound, which might have been the wind in the grass but was just as likely the sound of my weekend slipping away. We were supposed to go to Pudding River winery on Sunday to help Sean with harvest, but this was going to be long and ugly.

And in realizing that, I started to slip back into the head space I occupied from 1990 to around 2006, when I was renovating houses and even did a short stint as a general contractor.  I started to break the problem down: I needed to jack up the roof, pull the railings, put in a new post, put it all back together. Then the problems showed themselves: How do I get the new post in? How to I reattach things? Demolition is easy with a big enough hammer. Putting things back together is tougher than building it in the first place. This post was part of the house we bought. I took some satisfaction in knowing it wasn't my work that failed but I was going to have to pull out a lot of what I built to fix this.

It turned out the post replacement was the easy part. Putting things back together I was confronted with two extremes. The original builders decked the porch with cheap drywall screws, which had rusted to the point that they broke when you tried to back them out with a screw gun. I, on the other hand, had overbuilt everything I touched. The porch steps had more top quality galvanized screws than a Boeing 787. The wood was all cedar steps and the most heavily pressure treated risers you can buy. Centuries from now, after the house had long since rotted away, there will be these damned steps, sitting in a field as trees grew old and died around them. That would have been fine but  I didn't use just one kind of screw. Oh no. I counted no less than 4 screw head patterns. Straight up philips, square head, some weird star thing that wasn't a torx head, a combination philips and square head and they were even different colors too! I had a table full of bits to try and take things apart. That was bad enough but then I had to go and putty over all those screw heads. That was just stupid. Half the point of screwing things together is being able to unscrew them. Putty over the heads and you're going to spend hours picking the dried putty out of the heads so you can back them out. Which is exactly what I spent most of Sunday doing before I caved and just sawed everything off. Of course then I had to pick out twice as may pieces of screws before I could get it back together. What was I thinking? People generally think of this level of construction as a pretty brutish thing with big saws and big hammers but  I spent hours, HOURS with a jeweler's screwdriver and reading glasses picking putty out of screw heads so I could take things apart or prep things to be reattached. 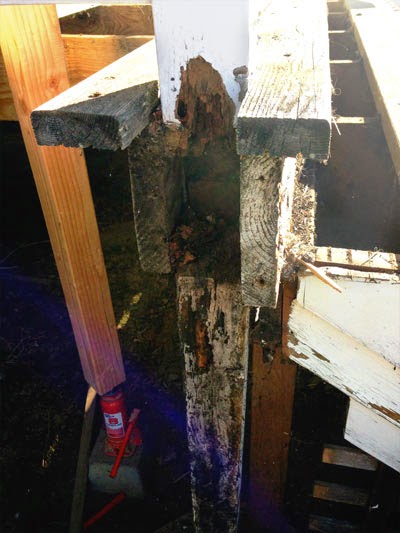 The whole thing would have been miserable except that as the days went by, I realized I was kind of enjoying myself. I looked at the whole godawful mess and I knew what to do to fix it. I understood that most people don't have the skills or tools to jack up their porch roof or tease a broken, rusted screw out of a railing, much less figure out the minimum of demolition you would need to do to get it done. For a few days this past weekend, while my sister was running the Grand Canyon rim to rim and Carolyn was picking grapes at Sean's,  I went back to my competent self - problem solving in the place where I was, and am, very skilled. It's not a place that fits in conversation when someone asks "what makes you happy?" or "Who are you?" I'm not the guy who likes having his weekend ruined by a rotting post or the guy who likes the tedium of pulling rusty nails and screws from the boards that used to make up my porch.  I'm certainly not someone who wants to live in a continual state of disrepair. And it's not that I'm utterly useless in my professional life or racing my bike. But I'm struggling against a never-ending avalanche of change and complexity in the former and I'm struggling against time and the threshold of fitness in the latter.  This, on the other hand, is intimidating to most people but it's easy for me.

I am, I suppose,  the guy who is happy fixing things. 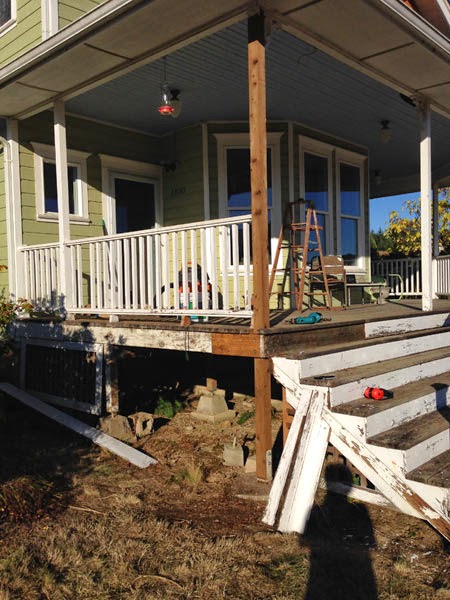 Sunday night Carolyn came home and found me sitting in the living room with a glass of cheap riesling and an ice pack on my neck (heat takes as much out of my fixing the house as it does racing my bike, it seems), staring out the window at the new pressure treated post that will join the stairs in outliving the rest of the house. I got the side railing back on, stronger than before but I still need to reattach the stair railing.