It's foggy, damp, 39 degrees and looks and smells like a wet dumpster out there. Walking to the car is about all the exercise I can muster. As I'm driving to get my gazillion calorie lunch, I passed by a homeless guy on a Walmart beater bike hauling a couple bags of empty cans. He's smoking a cigarette. He has more dexterity on a bike than me. He has way more base miles too.

I suck. I say that too every year. And every year I haul on the tights, put the fenders on and lean into another winter of grinding up the ridge across the valley because that's what bad ass mountain bike racers do and I always feel better when I do it. Wait, no I don't. I feel like I've spent two hours pedaling in a dumpster. It's even green. 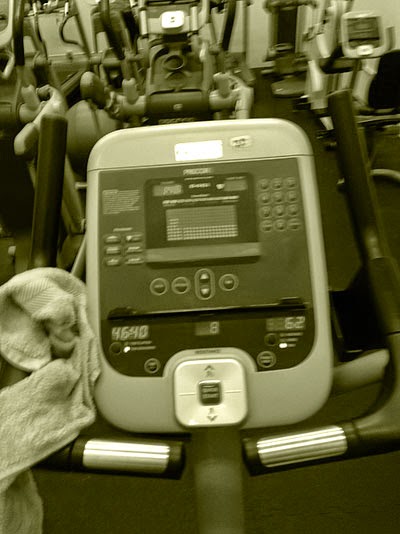 Actually, I've been going to the gym for a couple years now. I had to relearn to swim for a triathlon in 2013. Inexplicably, the swimming sort of stuck and I've been going a few times a week ever since. In all that time, I've never ventured beyond the pool. Linfield also has a full weight room, an equipment room, elliptical machines, treadmills, and yes, stationary cycles. Most of that stuff you need a trainer to set up properly. You can really mess yourself up with a kettle ball if you don't know what you're doing. Pedaling I'm pretty good at so I figured I could handle a stationary cycle without crippling myself.

It took about 10 minutes to actually find the stationary cycles. They moved all that equipment out of the weight room (to make room for more kettle balls, I guess) and stuck them in what might have been an old squash court through a side door in the basement of the athletics building. Most of the equipment was being used by college administrators. I suppose the sight of all those doughy old people trying to recover their long past fitness was too demoralizing for students, so they stuck us all here.  Well, I fit right in! I climbed on the nearest cycle, adjusted the seat and started pedaling. It didn't seem to notice. There were quite a few lights on the control panel of this thing and none of them were on. I stared at it. Finally, a workstudy student who was paid to sit in the room in case one of us fell off our machine, came over and showed me where the "On" button was (large, green, in the middle, really, the last place anyone looks). It got easier after that. I figured out how to set the resistance. I had my own interval sets loaded into an app on my phone so I was good to go.

Warming up, I had a chance to take in my surroundings. Really it wasn't bad. Yes, it was a windowless cinder block room. There was a TV but it was off. There were no loose dogs. Nobody was shooting. There was loud music that seemed appropriate to the activity. The stationary cycle had a place to put my water bottle and my iphone. Just by changing your hand position, you could see your heart rate. No clammy chest strap! Pretty posh by my standards. And it was nice being around my colleagues. A woman from Accounts payable was grinding away the miles on a treadmill. Our BBLearn administrator was on the elliptical machine in front of me. We weren't getting anywhere but we weren't getting anywhere together.

Things began to go a little wrong once I started my intervals. I noticed most of the people on cycles had their resistance set to around "5" and were spinning away at a comfortable pace. I was set to "13" and was pushing a pretty high cadence. I began to sweat. I know, everyone sweats at the gym. That's what you're supposed to do. You're not supposed to sweat like I sweat. My head sweats. I sweat out my nose. It doesn't drip off me it runs off me. I have a special headband that has an actual rubber gutter in it to channel the sweat away from my eyes. If I don't wear it, I'm as blind as a pepper sprayed Occupy Wall Street protester. 20 minutes in and the cycle is sitting in a puddle and I look like a super hero made of water having trouble holding it together. People are starting to notice. I'm breathing too hard. Nobody is panting in here. I was smart enough to bring a hand towel but it was soaked now. I looked horrible. I smelled worse.

I finished my set and found the spray cleaner. I cleaned the bike, the floor, part of the wall, the back of the student monitor's laptop. I probably should have cleaned her glasses too but we have rules about that in a college. I headed to the locker room. I got undressed.

I forgot to pack a towel.

I was still sweating. I still smelled really bad. Lacking a better plan, I headed to the shower with my sweat soaked hand towel. I was completely off-book at this point. I thought about washing the hand towel and staying in the shower until it dried. I thought about skipping the shower and bumming some Axe body spray from a student. I thought about standing under the hair dryers. I finally settled on showering, blotting myself sort of dry with my disgusting hand towel and striding purposely back to my locker and getting dressed really slowly. This plan seemed to minimize the "puffy pink naked white guy running around the locker room without a clue" part to an almost manageable degree.

It was a good plan. It would have been a good plan except it was 39 degrees and foggy out so I was wearing a wool base layer, a long sleeve shirt and a winter jacket. I was pouring sweat again before I left the locker room. I went to Harvest Fresh to get a sandwich and looked like I was going through menopause standing on line. I finally got back to my office, stripped to my wool base layer, opened the window and cancelled my afternoon meetings. By around three I had stopped sweating.

All in all, I think it went pretty well. A bit of fine tuning and a couple of extra towels and I'll be back in fighting trim by April.