Saturday I did my first trip of the year around the Mill Creek Loop. It's a bit over 32 miles of logging roads. I've lost count of the number of times I've done it or variations on it. I find the repetition soothing and familiar. Most of the rest of the world would find it intolerably dull. Still, I'm the audience and ringmaster of my own circus. I know how to keep myself entertained. This trip, crossing the last white gate before re-connecting with pavement I saw this: 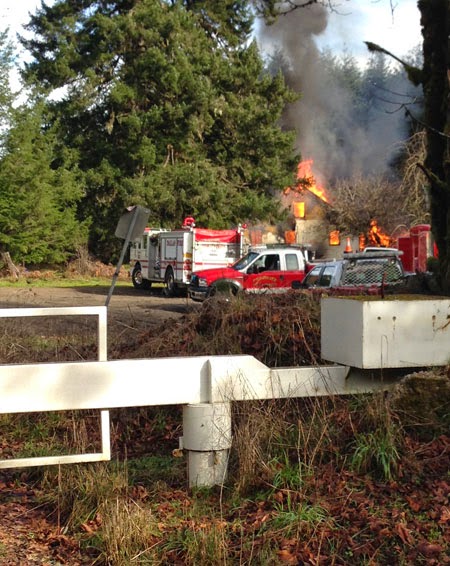 This is, or was, the first house after leaving the Mill Creek Main Line. It was, it turns out, a planned burn. I know the place was occupied last fall so I'm guessing this is the first step in a fairly significant home remodel. It's pretty common to burn houses down out here ahead of building something new. Getting the local fire departments involved gives them some much needed practice and helps keep things from getting out of hand. Everyone seemed to be enjoying themselves immensely. I was kind of sad to see the old house go. It had good bones.

Still, a house burning down is way more interesting than usual, which isn't to say my other rides don't have their moments. I got thinking about some of the other things I've seen riding around out here.


A Memorial at the top of Dorn Peak 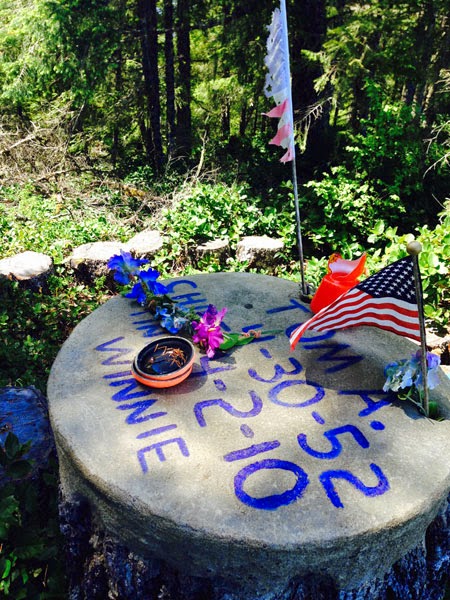 There are actually a couple of these. This one is the more elaborate of the two. It has a circle of log stools next to it and is very well maintained. I don't think they actually died there. Dorn is just the biggest mountain around here with a road to the top that's not gated. Maybe the people who made this thought they'd be a little closer to him up here. I wonder about what kind of person he was, that those left behind would do this in his memory.


A Pulled up Red Gate 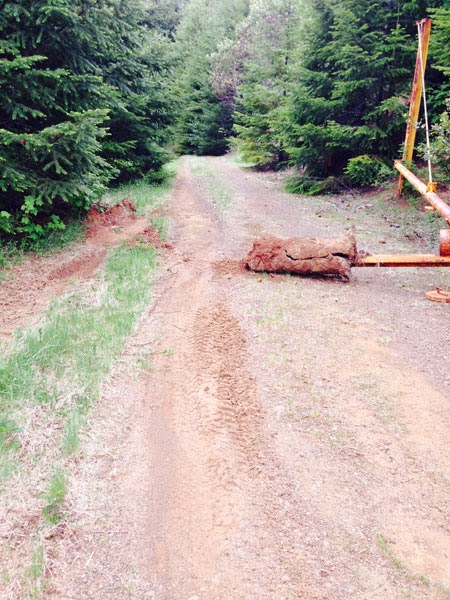 I hated this. This is about 15 miles into my loop, when I start the long descent to the Mill Creek Main Line. For years, when I crossed this gate, I knew I was on my own. I left the shooters, the trucks, the ATVs, the garbage behind. I was also totally screwed if I crashed. Every time I ducked under this gate, I felt relief and risk and the joy of going someplace that only gets visited a few times a year by a few people.
And then some prick with a big truck and a big winch and a big, fat, American sense of entitlement pulled it out. When I rolled up on this it had just been pulled up, maybe a few hours earlier based on the tread marks and soil moisture. I knew the road they opened ended at another, bigger gate. I had never been more scared rolling down that road thinking I'd run into the people who pulled it out. If they were dumb enough to do that, well, the stupid options were just limitless.
They were gone. I relaxed when I went around the next gate, which turned out to be a bit premature because not 2 minutes later a saw... 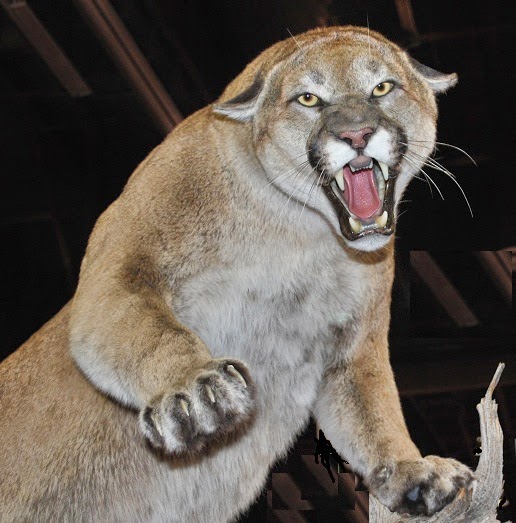 Not that one, specifically. That one's stuffed. I'm pretty sure they don't vogue like that in real life. That's what cougars look like to people who understand them as symbols of Nature as a Threat. In my case, the whole moment lasted really just a couple of seconds. I had stopped to eat and switch water bottles. I heard it before I saw it and based on the speed and direction it was moving, it had seen me long before I heard it. That's what I remember most vividly, the sound of its paws on the road. The trees were thin here and the road curved below me so I had a pretty good view of it before it disappeared.
Cougars, like wolves and bear, can certainly be dangerous, but I understand a truck full of rednecks tearing out gates as a much clearer and common danger. These animals are beautiful and rare in nature. I was grateful for the chance to see one.
Then I realized I had to follow it down the road to get home. I was a little concerned about that though it did occur to me that getting eaten by a cat would top the charts for ironic punishment. 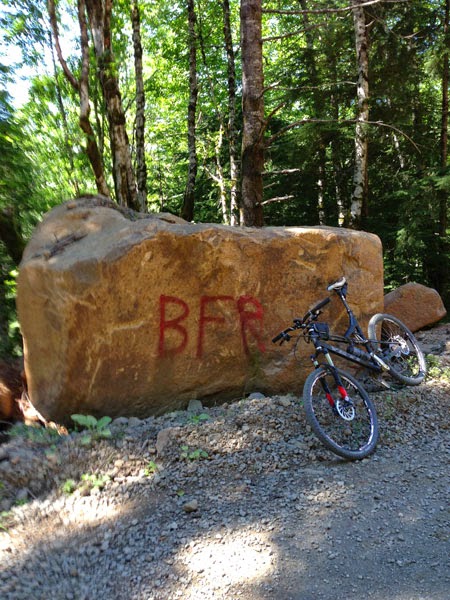 I passed this on my Laural Mountain excursion in 2013. I'm pretty sure it stands for "Big Fucking Rock". This was a waypoint on an epic 70 mile loop to go see something else. 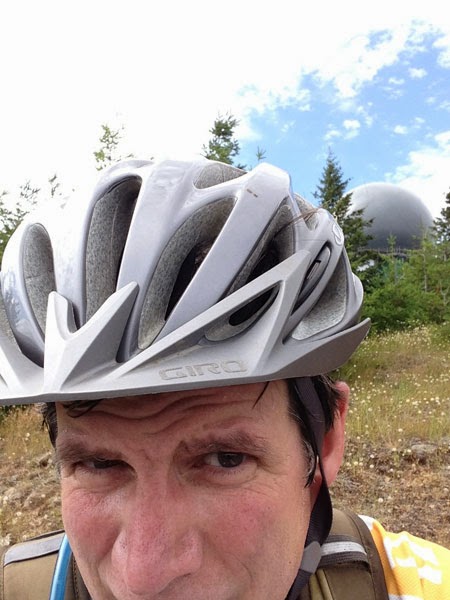 I may get in trouble for posting this. That dome in the trees behind me is the radar station on top of Laural Mountain. You can see it on your way to the coast on Hwy 18 between McMinnville and Sheridan. It stands out on the top of the highest point in the Coast Range. I'd been scheming for years to bike up to see it and finally pushed up to, well a few yards from it.  The thing is, it's a Joint Surveillance Station. It serves the FAA, the Air Force, NORAD, and probably some other spooky agency the tin foil hat crowd worry about. The government really doesn't want anyone up near it. The access roads are gated and it's a long way from anything. About half a mile from the top of the mountain the road is blocked by another gate with a warning sign saying access is restricted and there's 24 hour video surveillance. On the other hand, the station sits on BLM land and only the station itself is fenced.  I also had the kind of impaired judgement that biking 36 miles up a mountain  can give you and at that particular moment I was willing to get renditioned to a Black Ops site in Poland just make it to the top.  So I rode up to the point I could see the dome but no cameras, took my trophy selfie, and as common sense returned and I got thinking about my GPS enabled smart phone and Edward Snowden, I hightailed it down the mountain in case the NSA were on the way.  On the way back I flatted twice, used up my CO2 inflation cartridges, ran out of food, and had to roll 8 miles on a flat rear tire into a thunderstorm to get home. So if anyone from the government is reading this, rest assured I've learned my lesson and I was severely punished.

In the end, Carolyn picked me up at the bottom of Gooseneck Rd, about 4 miles from our house. As the rain came down while I sat on a guardrail under the trees, I can tell you that my wife pulling up in the Subaru was the best thing I saw that day.