So my sister tricked me into doing a 5k trail run last weekend.

She's clever that way. I only have myself to blame. She was coming up for the weekend for a visit. Carolyn was in NY visiting her family and I was looking forward to a couple days catching up, maybe a bike ride up to the ridge, go to Portland and do some shopping, have a nice lunch, watch some movies, punish a few bottles of chardonnay, it was going to be fun! 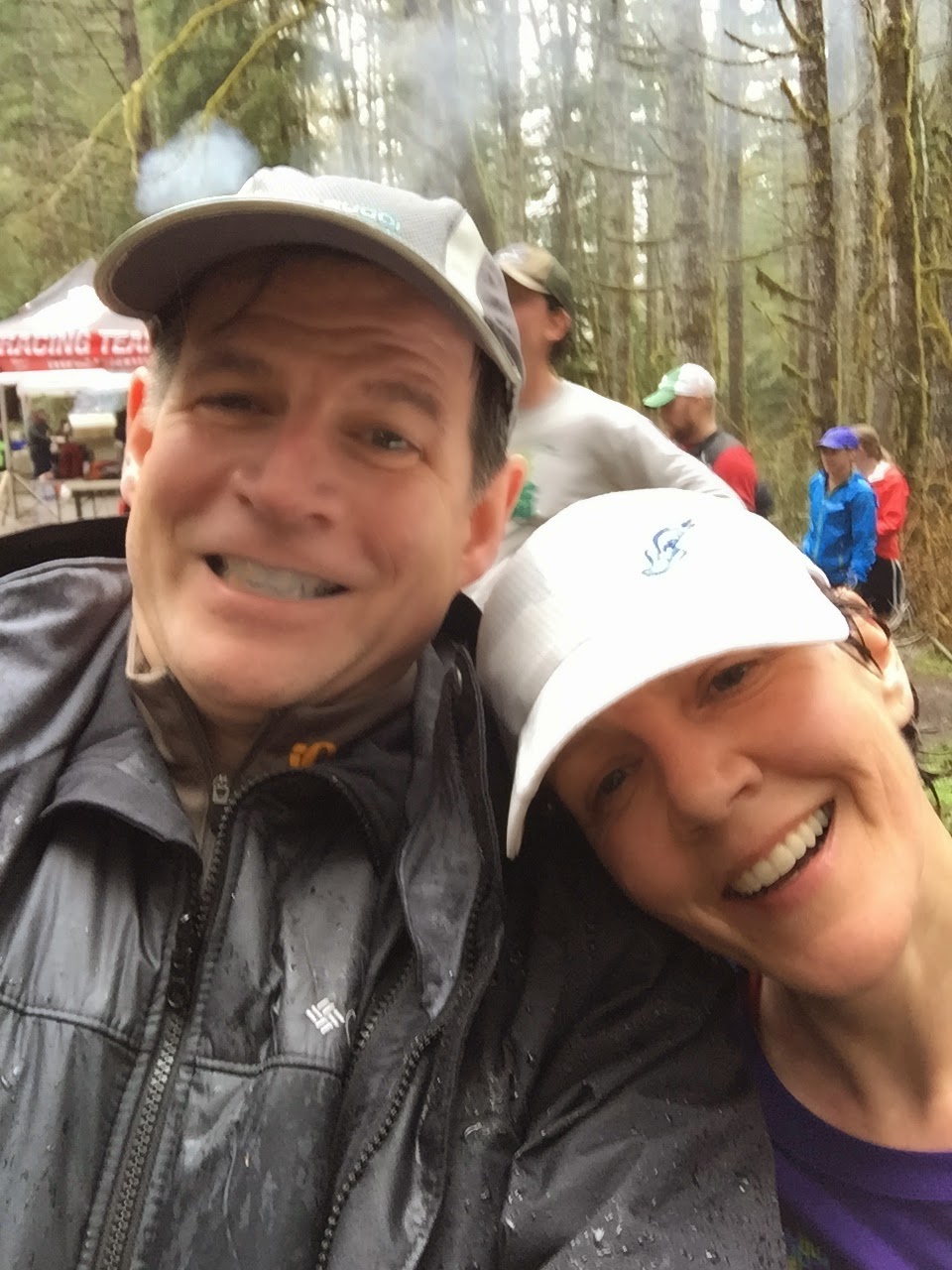 As fate would have it, a friend on Facebook posted a link to the 5k, 10k, and 1/2 Marathon Spring Fling trail run at Alsea Falls on Saturday. Mike Ripley was putting it on and I've raced my bike on those trails before so I knew it would be well supported in a beautiful setting. I thought Mallory might like it.  I messaged the link to her telling her she should do it. I'd cheer her on and make her burgers for dinner. One minute later she messaged me back. 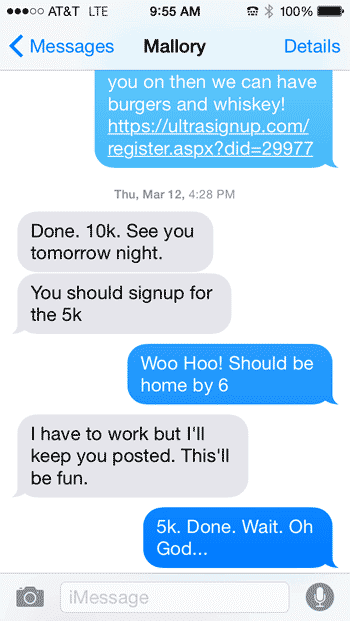 In my defense, 5k seems really short in a text. Just 2 characters! Anyone could do that. I should also point out that these decisions are easy to make online where digitizing anything takes it out of context. I once bought a $70 toilet paper holder online. Seriously! I was buying all the fixtures for the upstairs bathroom at homeclick.com and after dropping several grand on a tub, toilet and a fancy pants sink big enough to wash a basset hound in, $70 was a bargain! Way cheaper than the $150 towel bar. In hindsight, it's an ok toilet paper holder and all but $70 was a bit excessive. I opted out of the $150 towel bars and found some nearly as good for $30 at Home Depot.

I thought I'd learned my lesson, but there I was standing in the pouring rain, part of a crescent of out of shape people staring at a trail with looks on our faces not unlike the look of people waiting for search and rescue to chainsaw a hole in the ice so they can do a polar plunge for charity. My brother just did this, so I have a lot of photo documentation of what that expression is like. It's a heart breaking mix of fear, exhilaration, and the realization that at some crossroad in your life, you chose the wrong path. How could I have forgotten such basic things like checking the weather? If I had I would have seen the red alert flag that would have told me it was going to rain three inches and I might want to start gathering up animals and put them in a boat. Why didn't I remember that I haven't run 5k since 2013 and that left me limping for 3 days.  How did I forget that I race mountain bikes so I'm used to taking my exercise sitting down, and all of my shorts have crotch pads?

I think my sister was enjoying this.

She lit out 10 minutes earlier on the 10k. This is my crazy-ass sister who ran the Grand Canyon rim to rim and tells me it wasn't the hardest run she's done. She runs 5k back to the car because she forgot a water bottle for a 50k she's about to start. This was her world and I was a fish out of water. Well, not out of water, fish would have been quite happy with the nearly liquid atmosphere down there, but you know what I mean.

Still, we are related and despite my being out of shape, out of place and about as beta as males get, dogs will hunt. Mike shouted go and I went.

There were two little girls, maybe 8 years old in front of the arc of reluctant racers. I told them to shout if they needed a pass.

One more thing I forgot: If you're a 55 year old man, don't ever try to make friends with 8 year old girls. It's never going to not be creepy.

It didn't matter. They crushed me. 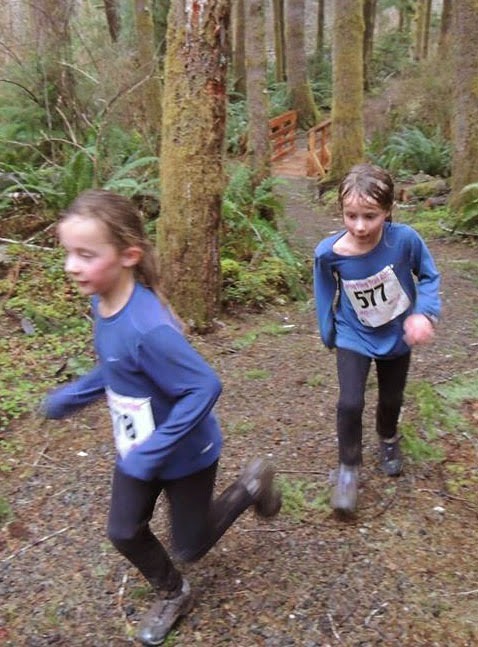 The hard thing wasn't that they beat me. I've been beaten by every shape and size person imaginable. I'm pretty used to it. The hard thing was they were 8 years old and they ran like children - laughing, arms flailing. They ran hard and I expected they would burn out the way kids do. I left them behind pretty early. At the halfway point, I grabbed a cup of water at the aid station - adhering to my race plan to run a solid 3k and then blow up spectacularly. As I stood there wheezing by the side of the trail, they ran by me, arms still flailing, still laughing, and they kept that up for 6 kilometers. Oh yes, this 5k was really 6k. I'm guessing that's because Mike heard I was coming so he added a kilometer just to see the look on my face when I found out.

Seeing those kids never letting up was awesome and a little frightening. I have distant memories of what it meant to be 8 years old and running 3-4 miles at a racing pace wasn't one of them. I think I was mostly digging holes in the ground and shaping dirt into interesting mounds. I was in Cub Scouts too. These kids had a physical vocabulary I didn't even start to understand until I was 18 which was when I discovered beer and stopped caring anyway. 8 year old kids aren't supposed to know how to pace themselves.  At 55 that ability still seemed to be eluding me.

I have to own up that I speed walked a few times the last couple kilometers. When I say "a few times", I mean "most of". I didn't feel too bad about that. My walking pace was only slightly slower than my running pace. I managed to run in the last few hundred meters. I finished in 35 minutes. Not horrible for an off the couch 6k. At least I don't think it's too bad. Really, I have no idea. The winner was 10 minutes faster. The last runner came in almost an hour later. maybe 25 minutes after I came in I cheered Mallory across the finish. She had a great race and won her age group.

I wanted to have a bad time. I wanted to regret signing up but in truth, I really enjoyed myself. I certainly enjoyed myself more than if I had just been standing there waiting for Mallory to come back. I would love to do another 5k and seeing my sister finish made me wonder if I could get in shape to do a 10k. Maybe the most memorable part of the race was seeing those kids running through the woods marveling at everyone running around me. Big, small, young, old, every one of them pinned the bib on and lined up. 5k  is a beginner distance. They're usually billed as run/walks and I'm sure the idea is to get people hooked on running.  As the race distances increase, the fitness of the competitors really ramps up. At 5k, I wasn't the only one out there who felt the pain of struggling through something they weren't ready to do. I wondered about what led them to do this. Were they doing it for family? For themselves? Because their siblings tricked them?

Maybe they were doing it because you have to start somewhere. Beginnings are hard. And they are wonderful. As I stood there in the rain waiting for the race to start, it occurred to me that I've done nearly 100 mountain bike races over the years but it's been a while since I've really been at the beginning of something.