So this last weekend I went out and did the Chainbreaker in Bend. I finished third from last. Again.
It was the kind of finish that might compel you to wait for your wife to go to bed so you could put some Field Report or maybe Sarah McClachlan on the stereo, pour yourself a glass of a nice single malt, and stare at the dying embers in the wood stove wondering why you show up at all for these things. 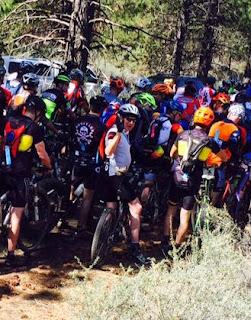 You would think that. But you would be wrong.

You would be wrong because I'm not a night person and I always go to bed before Carolyn, even on the worst days.

You would be wrong because I don't drink whiskey much any more.

Mostly you would be wrong because, at this race in particular, all that palaver about finding different reasons to race as I seem to get slower really had meaning. As much as I want to write something funny or sad it was neither of those things.
There's been an overarching oddness to racing this year. I've done two 5k running races and it has been so strange lining up at the start without a bicycle under me. Mudslinger was bittersweet because so much of the course was gone, but when I'm honest with myself, I never really liked those trails all that much. Yet over time they became familiar and in a way, comforting. They remind me of our neighbor's dog Wrangler. Wrangler is a classic junkyard dog. Mean, dangerous, and would kill anyone who wasn't a Springer. Every time I get out of the car to open our gate he's down there snarling at me, foam dripping off his fangs. One occasionally electrified wire keeps him on his side of the fence. We've hated each other for years. We've hated each other for so long we've gotten used to each other. And he's gotten old. He can barely haul himself down to the fence now and he wheezes more than barks. I admit I've developed an odd admiration for him and I'll miss him when he's gone.

Chainbreaker, on the other hand, was always a fun course and one of the first where I actually made the podium. But last June most of the course was consumed in a huge forest fire. This year the course was mostly new, with some roads and trails running through the burn area. The race started in a section that hadn't been burned but almost immediately entered the burn zone. The Bend Bulletin got some great photos of the race you should check out. Of course I went out too fast and fell behind. It took about 10 minutes to settle down and find my pace. Quite a few racers went by which is usually pretty depressing except one of them was my friend Lilly Schiavo.

We've never been teammates and she and her family live on the opposite end of the state, but we've been doing the same races for years and ride at pretty similar paces. We had a long conversation some years back riding down Mt Ashland after the Mt Ashland Hill Climb. That's when I learned we were both cancer survivors. She didn't race last year. Her cancer came back and she had to deal with it. She did and when she rode by me I could have got off my bike, sat down on the trail and cried I was so happy to see her back and riding so strong. Of course if I had, she would have got off her bike, walked over to me, slapped me and yelled at me to get back on my bike because "IT'S A FUCKING RACE!" I kept going. In the end she beat me by six minutes.

If I sound like an overly enthusiastic Lilly Schiavo fan boy, I should point out that I'm probably not the only one. She's been a long time cycling advocate in Southern Oregon, putting on cross races and getting people on bikes. She's also very up front in talking about her illness, the gratitude she feels for still being able to ride, and the fears she has about her own mortality. She also raced in a Team Alex jersey. Quite a few racers from Southern Oregon were wearing them. Alex Shepherd was 11 when he was diagnosed with aggressive brain cancer (Anaplastic Astrocytoma) which took his life just a few days before this race and just a few months after his 13th birthday.  His parents shared their son's experiences both good and bad in great detail on Facebook. Lilly knew Alex. My sister and Joe knew him. I didn't, but we all were shattered by the brutality of his illness and the end of such a promising life.

Truth is so complicated. The truth is I had a beautiful race. I raced over scorched earth. I raced in a white jersey with no sponsor labels. I raced knowing my amazing wife was waiting for me under a tree on a folding chair with a cooler of beer. When I finished and was sipping a beer from the aforementioned cooler, I was thinking about the mindfulness and clarity that racing enforces. It's one of the reasons I still do it. This one though, it was hard for me not to feel the whole experience metaphorically. It was hard not to see the pattern of life on display around us.

Which is probably why I'm so slow.