As I'm writing this, I'm standing in Anne's loft. My bike is packed in a travel case. I'm looking over my screen at my new humongous rolling duffel bag that happens to be the exact color of my late grandparents 1968 Galaxy 500 - a sort of copper color that Tom Waits described as "monkey shit brown". We're about to fly to France. Short of illness or serious mechanical failure in one of the various machines we will use to get there, in a few days I will be mountain biking in the Maritime Alps. If it sounds like I'm not excited about that, it's only because I don't have the vocabulary to describe how strange and wonderful this all is.

I'm getting ahead of myself. The France trip had been on the horizon for awhile. It's the vacation we've never had but it seemed so abstract in January and March, like those drunken plans to do some great thing or get together again because it would be so cool and how could we not but you never get around to it once the sun comes up. Except this is Anne and us and if it was a good idea after a great dinner and a few bottles of wine, it's usually a great idea the next day. Still, roll back the clock even a few weeks, even after we bought the plane tickets, even after we renewed our passports, it seemed so distant. Just a few weeks ago I was down in Ashland racing the Spring Thaw again. It couldn't have been farther away.

I skipped the last two or three Spring Thaws. I was sorry about that. It was the race that got me back into biking. I always loved going back to Ashland and riding the roads and trails that I knew decades before.
Right when I moved to Cat II so I could race the long course around the watershed, they scrapped the long loop in favor of sending everyone up and down a loop of steep dirt road and technical downhill trails. I hated it and dropped the race from my schedule. Apparently, I wasn't the only one and this year they went back to the original course. I decided since I had been mouthing off about how I hated the route change for so many years, I better walk the walk and show up when they changed back.

The long course starts with a seven mile climb up forest road 2060. I have old mix tapes labeled "2060" or "Milepost 4" after the BLM markers on that road. I rode the first three miles of the climb after work wearing a Walkman that was as heavy as a brick oh, hundreds of times over about 9 years. I knew every inch of that road. 1987 to 1996 contained most of the events that defined who I became as an adult. I was 26 when I first road up that road on a Trek 830 and after that ride I met Carolyn, we moved to Portland, we bought a home, we lost loved ones to AIDS and time, and all that time, I kept riding up that road until we left the theatre and stopped working in Ashland during the summers. I  rode it again in 2009 right before my cancer surgery not because I needed to think, almost the opposite. I needed to be still, to not think, to fade into effort and place.

So I rolled out of the start with a completely overwrought sense of the significance of the moment. Not a good head space to race in, even if it makes you feel all New-Agey and spiritual. Still, even years later, it was familiar and I found a good pace up the first 4 miles, hanging with the pack.
That picture really was taken by my sister. Mallory had gone out to run an hour before the race started. She was on her way back down and passed my going up, grabbing a picture on the way by.  I yelled "Hey sister!" as I passed. A few pedal strokes later, the guy I was riding with asked:

"Was that really your sister?"

"She ran all the way up here?"

We are a most peculiar family.

I faded a bit the next 3 miles or so. I haven't been logging the base miles and I was freezing up at the top of the course. It was mid 40's and I'm having circulation issues with my hands. Eventually the course trends downhill and I started to feel better. I got a good head of steam on and reeled in a couple riders. Passing 4 corners the course turned into trails. Fun but steep and I am really out of practice for this kind of riding. I was enjoying myself though. The BTI trail really airs you knickers out in the way roller coasters do right when you start the first big dip.

Mallory caught a picture of me right before the finish. I rolled in only 2 minutes behind Lilly Schiavo this time. It took 20 minutes to get the feeling back in my hands. Joe roared across the line maybe an hour before me. I think he felt kind of bad I was clutching my burrito for warmth instead of nutrition. He got swept up in conversation with the other fast riders. That was fine. 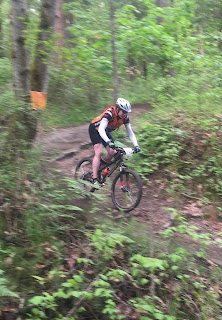 It's clear the strange sentimental quality of this year's racing isn't letting up. That's really OK. I'm having more fun this year. Next up will be the Oregon 24.

Oh yes, and France. I have a plane to catch.