A Little Ride into the Night and on to the Morning

Carolyn, to her great credit, just smiled and said she knew I was going to do it and understood how important it was to me. Thanks to her keen situational awareness, she also said I was on my own. She had to work. She also had to be someplace with flush toilets, hot water and basic hygiene. When we were in Antibes, we attended a Swedish solstice party. After many drinks, someone opened up a tin of fermented herring. The smell of that rotten fish took us all the way back to the pit toilet at last year's race. No, it was a relief really. Once I started making lists and packing she knew I was on top of things. She cooked up rice bars and boiled eggs and potatoes for me. I felt better knowing I wouldn't be leaving her in a hot parking lot to watch other people have fun.

Friday afternoon I pulled in to Bend, picked up my number plate and headed to Wanoga Snow Park, where the race is staged. This year I didn't have a trailer. I borrowed a big tent from my friend Mardi and I set up in the woods right by the course just a few hundred yards from the lap point. My neighbors seemed quiet. It was shady and not too far from the portable toilets.

I'd like to take a moment to share an important truth with you.  Everybody slams the door when they leave a portable toilet. Everyone enters them with care and flees them with horror slamming the door behind them because they made the mistake of Looking Down past the seat. Every. Single. Person. All day long. All night long. Every God Damned Time.

People, portable toilets are wonderful things. They work miracles. They're way better than pit toilets. They don't smell bad. They have hand sanitizer dispensers. They come with people who haul them away when your event is done. Really, you'll probably leave one cleaner than you would your own bathroom. But they are also theatre. There's suspension of belief involved. You're not supposed to think about the fact that you're in a plastic box barely thicker than a plastic milk jug with your shorts around your ankles. You're not supposed to think about the long line of cyclists who can hear everything you're doing in there. And you're really not supposed to think about the fact that you're sitting a foot or two above what would otherwise be several miles away in a sewage treatment plant. That's part of the bargain. For the most part you're pretty good at it. But you can't resist having a look down the hole and when you do it all comes crashing down.

Friday night I had a couple of beers, drugged myself with Ambien and wore earplugs, so the banging was a distant wave that lapped against the shores of my drug induced slumber. Race night it was like a guy with a starting pistol. Without medication  the bang of a portable toilet door every 3-5 minutes left me a twitchy nervous wreck.

This actually kind of worked in my favor. I'd stocked up on all kinds of caffeine laced energy chews and drinks which turned out to be totally unnecessary. By 2 in the morning I was hearing that slamming toilet door everywhere. 5 miles into the lap that bang would go off in my head. Staying awake was no problem at all.

Setting aside sleep deprivation, it was also 15 degrees cooler than last year. It actually rained earlier in the day.  This meant keeping cool wasn't a problem and the trail conditions were fantastic. No dust and the trails were tacky and perfect for riding. I didn't do any pre-riding figuring I'd ridden the trail 9 times last year.

My poor old Yeti is showing the years almost as much as I am. The shock mounting bolts are chemically welded to the frame. The pivot bearings for the suspension are similarly stuck and badly in need of replacement. The bottom bracket has a blown seal. The frame is way past its service life. The whole bike creaks like a wooden ship. Still, in a sweet way, it suits me. Our fast years are behind us. This isn't a terribly brutal course and short of some catastrophic failure, the bike and I would be fine. 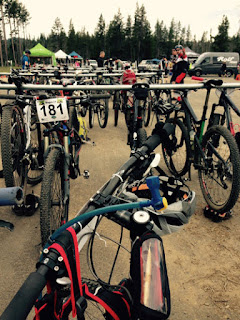 So Saturday morning I racked my bike near the lap point. This race has a Le Mans start, meaning you run to your bike. Mike had 100 more racers this year so he sent us on a long run to stretch the field out. Quite a few racers wore running shoes and staged their bike shoes by their bikes. I thought about doing the same thing since I've blown my calves out running in the wrong shoes before,  but I had no idea how I would recover my running shoes after I started riding. Other racers had crews or team members who could grab theirs. I knew my shoes would just sit there getting knocked around until someone noticed they were their size and took them. Bastards. I was rapidly filling with hatred for my fellow racers for stealing my stuff. I needed a plan. The running part of the race went right by my campsite. That was it. We took off, I ran in my running shoes and when I got to my car I stopped, opened the hatch, took off my running shoes and donned my cycling shoes. I ran in the last couple hundred yards and jumped on my bike. It was genius. Of course everybody else had no idea what the hell I was doing. But then everybody else wasn't going to have their shoes stolen by filthy bike racers.

I started up the first hill and settled into the race. It was going to be a long 24 hours.