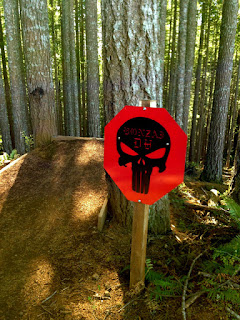 It's been a while since I've written. I feel bad about that but truth be told, I didn't have much to write about.

Or I did, but it wasn't ready to be written.

Or it was, but I didn't feel any better writing it.

That's it. The thing is, I started this blog to write out my cancer journey, because it made me feel better. I kept it up as I re-discovered mountain bike racing and it's been a good place to write out a lot of the funnier moments of my life but also the painful ones. Maybe especially the painful ones. The funny things are still there. So are the painful things. Maybe not as epic, but they're still knocking against the walls of our happy lives. A marriage that's ended, sickness, death. The kind of sadness that's unavoidable as we get older. At a certain point, it just gets depressing writing about it.

And I've been bored with biking.

I know, I know. It's that time of year. It's hunting season so I stay out of the woods. Racing has been over for quite some time and the holidays are piling on. Work really piled on this year too. And it all conspired to really sap my enthusiasm; which is stupid because I really have so much to look forward to. So I end up adding low self esteem to the mix.  Brilliant.

I'm actually a pretty happy guy and when I get in this head space, some measure of self-righting starts to kick in. Of course, the weeks before daylight savings time ends are a lousy time to reset your life. No matter how good a job you do pulling yourself together, the cats are going to get you up an hour earlier and it will be dark when you get home from work.

It's not a bad to to think about time though, and maybe go back in it to find something you lost. So last Saturday I went back to Black Rock. That was where I started riding again in 2008. It is also one of the strangest places I have ever ridden.

Back then, it was maybe the southernmost iteration of an old school North Shore freeride park you could find on the west coast. Black Rock was and is 1000 acres of committed crazy, and one of the more successful cooperations between between riders, the state and private landowners. An experimental forest 3 miles into the wild from Falls City, which itself is the fleeting edge of civilization, all given over to a subset of mountain bikers who test the boundaries of what your mind screams you shouldn't do on a bicycle. Black Rock trails tested riders in two particular ways: How much air could you put below and in front of a person on a bicycle at the same time, and how much solid space could you take away on either side of a rider moving at a relatively slow speed, and still consider a line "rideable". Black Rock wasn't so much a trail system as a laboratory.

I had no business being riding there on a 1988 Bridgestone with 1st generation Manitou forks (with a whopping 1.5" of travel!) Of course I didn't know any better. To the trail builder's credit, there were ridearounds of most of the stunts. The trails were graded and I kept to the easiest one: "Bonzai Downhill". It was a clever design. Even a novice rider could ride down the thing. As you got better, you got faster and there were jumps to hit that would get you in the air. Over time, you could move on to bigger stunts on the tougher trails. It was beautiful too. It just snaked down the mountain in no hurry to get you to the bottom. It was purpose built to be fun to ride down. And it was.

I never left Bonzai. I got a better bike and I got better riding it. But freeriding was a young person's sport and in my late 40's, I had lost the sense of immortality one needs to be really good at that sort of thing. As I got back into racing, Black Rock seemed less relevant to what I was doing, as opposed to cranking out intervals in the barn wearing a heart rate monitor.

Last Saturday was foggy. Rain was threatening, the neighbors were having a motocross race. Carolyn was at work. In about as foul a mood as I could muster, I loaded the bike in the truck and headed off to Falls City. I hadn't been to Black Rock in 3 years despite it being only 30 minutes away.

I don't usually go on rides seeking answers. This was different. I'm not sure what answers I was hoping to find there but as personal quests go, the art direction was fantastic. The sun burned through the fog as I pulled up to the base of Brown Mountain and Camp Tapawingo, the kids camp that sits between the Black Rock trails and the parking area. The fall colors just blazed. The lot was filled to overflowing with riders as surprised as I was the day turned out so spectacular. For a park dedicated to a type of riding that had largely faded away, it could sure still pack 'em in.

As I spun up the access road to the top of Brown, I passed groups or riders pushing big hit bikes and others who had stopped to session a section of trail that crossed the road. I was about to pass a young couple pushing their bikes up the last few hundred feet of the climb when a guy blew by me wearing a skin suit riding a carbon fiber hard tail.  He was just as polite as could be and not even breathing hard, proving that big air downhill riding and heart rate monitors aren't mutually exclusive, I suppose.

His presence was certainly different. Not the kind of rider one expects here. Of course, neither was I. Other things had changed too. The land on the backside of the mountain had been clearcut. The last bit of trail to the top had been rerouted so there was less of it and it was easier to ride. The old split log wooden bridge that wound over a dead tree had been abandoned in favor of a steep starting slope with a red skull sign in front of it. Nice sign but I never had any illusions of which of the two things were more dangerous.

I talked with the young riders who turned out to be Willamette University students for a bit. A guy rode up on a Trek hardtail, set up at the top of the berm and rolled down the trail with absolute grace. I let the kids (Yes, they were younger than my niece. They're all kids now. It's better that way.) ride ahead of me. I waited a few minutes and rolled out.

It was a good trail. It still is.  It's changed too. The corners are banked steeper. It's smoother. You can carry as much speed as you dare. There are some long wooden bridges, but plenty wide for the faint of heart. Rolling down the mountain, I could feel confidence returning. I could ease up on the brakes, let both wheels go off the ground a bit, feel the relationship between me, my bike, and the trail, feel what the builders intended when they banked the trail a certain way, or put two table jumps in a row.

And I could feel the fun coming back. Heading home I realized it was the most fun I'd had on my bike without a number plate in years. Why had I stopped riding here? I understand why mountain bikers like to run POV cameras while their riding. It's really hard to describe the experience and filming it seems like the best way to describe it. I actually tried recording part of my ride using my iPhone stuck in the sternum strap of my pace. I got 13 riveting minutes of my right hand. It may be the worst mountain bike video ever recorded. I'll spare you the pain, but if you're interested in seeing what it looks like to ride the trail about twice as fast as I ever could, Walter Sorenson has some outstanding videos.

Magic never lasts. The following weekend the first massive pacific storm blew in and I didn't venture much farther than the barn to feed the cats. Still, it's there,  just over the mountains. It's a reason to ride when all the others fall flat. We can't really go back in time. We can only look forward to something.