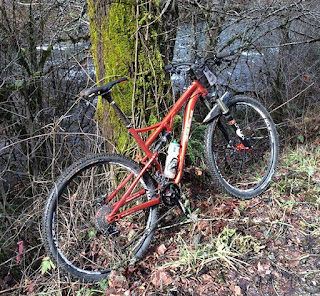 Saturday I took a ride over the ridge to Mill Creek. It's a short loop with a fun, steep drop in off the ridge.  It wasn't much of a day. The sun didn't make it out and rain was moving onshore. Heading out, it felt like riding in a cold, wet dumpster. It kind of smelled like it too. The Christmas tree farms had been burning slash right before laying down a few thousand gallons of Crossbow. Damp soot, broadleaf herbicide, Gray skies. Just depressing.

But I was riding a new bike; a 2014 Salsa Spearfish! So who cares? It might as well have been raining unicorns and circus peanuts. It's the first new bicycle I've purchased in 26 years. I'm pleased to report that the "new bike feeling" I, and every other kid experienced getting one for Christmas or a birthday, has not diminished over those years. And just like I did 26 years ago, I'm going to tell everyone about it whether they care or not because ITS A NEW BIKE and seriously, I just don't get excited about things like I used to so this feels a bit strange and I want to share...

Though it's a 2014 model year, its technology is pretty much up to speed. It's a 29er, meaning the wheels are 3" larger in diameter than all my old mountain bikes. This means the tires hit objects in the trail at a gentler angle than a 26" tire. In theory it's supposed to smooth out the ride. It has a 2 x10 powertrain, which has replaced the old 3x9 systems. This lightens things up and provides more reliable front shifts. You can't "cross chain" and they're less likely to drop the chain in the front. Having spent quite a few laps on the Oregon 24 putting my chain back on, that was kind of a big deal for me.  The rear derailleur has a clutch that reduces chain slap. The Spearfish has front and rear suspension. It has less travel than my older bikes but the suspension design makes better use of the travel it has. The frame is aluminum. I first thought this was kind of down market, coming off a 6 year lust for an all carbon fiber bike, but I have it on good authority from Joe and Zach, Maddie's domestic pro boyfriend, that aluminum is more durable. Yes, it's a pound or two heavier, but I'm a pound or seven heavier too so I should just get over it and cut back on the wine. I've set it up to run tubeless - latex sealant replacing inner tubes. I've swapped out the aluminum seat post and handlebars for carbon fiber versions. I also replaced my venerable WTB saddle with a new fancy pants  SQ Labs saddle. I'm still undecided about that upgrade. So are my sit bones. Stay tuned...

A mile from home on my ride, I passed the clear cut and starting the steep part of the climb. I could begin to take in what all this technology gives me. Mostly it gives me the clarity to understand that I still have to pedal it. I am still the motor, and I am the most important part of whether I get up the mountain quickly or slowly.

I'm a little disappointed. Of course I know new bikes don't give you super powers. But there was a little bit of me, maybe the same part that goes all childhood giddy at the thought of a new bike, that kind of hoped that it would. Alas, no. It's still a sweaty, panting slog up a couple miles to the ridge. Despite wallowing in oxygen debt, I did notice the bike felt planted, even on the steepest section. That's different. I usually have to put my weight forward to keep the front wheel from wandering.

The bottom bracket - the pedal axle and bearings - creak. Bummer. It's common with these new press-fit bottom brackets. For decades bottom brackets were threaded to the frames of bikes. A couple of years ago the industry came up with a new standard that pressure fit the bearing assemblies to the frame. That relies on impossibly close tolerances, so small movements between the frame and the bottom bracket means it makes a creaking sound as you pedal. In fairness, my bottom brackets have always creaked. I've had a long string of failed relationships with bottom brackets. I had one seize completely on my Felt. Joe didn't think that was possible. I blew the seals out of a $120 Chris King bottom bracket. It's too expensive to replace so now I'm condemned to spend countless hours in the barn rebuilding it every time it rains and I should point out, this is Oregon. And even after repacking the bearings and tightening everything to spec, they've always, always, creaked. You can hear me coming for hundreds of yards. I don't need a bike bell. It's sad but I've learned to live with it.

Starting downhill, the bike felt... tall. Like I wanted to finish the ride, get in the car, got to Salem, and buy a dropper post, tall. The feeling diminished as I got used to it. I'm not a gifted rider by any means, but I was familiar with my old Yeti. I knew where it was underneath me; what it's contact points were. The Spearfish is just different. It does seem to take the hits well. It cornered well too. Early 29ers had long wheelbases so tight turns were a problem. This bike has the same wheelbase as my Yeti and seems to handle the tight stuff pretty well. I don't handle it well. I panic and end up in the bushes, but I don't think I'll be able to blame the bike for that.

As I dropped down to Mill Creek I got to feel better and so did the bike. I always like this side of the valley. Weyerhaeuser  keeps it gated. The creek is lovely. I can tell they're doing some serious logging upstream. The road's seen a lot of use. By the time I got back on pavement, the bike was pretty filthy. It's hard to make an anodized orange bicycle look dingy but I did my best.

Riding back home, I got thinking about what this bike is good for. It was built for marathon racing. Comfortable but fast. It's a good fit for most of the riding I do. Most of my weekends seem to be spent noodling around on these roads. I'll be curious to see how it feels on the trails. I'll let you know as soon as I get on some.