OK, quick summary: I did the Tillamook Bay 10k run today. It was wonderful. Really. If you're a trail runner and you want a great race along the ocean run by really kind people with the added bonus of easy access to some very famous cheese, this is your race. You don't need to read the rest of this. I just wanted to give a shoutout to the promoters. I really had fun at my first 10k.

If you're in for the long haul, here's the thing: Carolyn is back East for a couple weeks. It's really disruptive, if you're me. I don't know what to do without her. I'm already horribly self-absorbed and when she's gone I just turn into this supermassive black hole of self pity. It's awful. Event the cats won't put up with me. I watched "La Dolce Vita" on Netflix last night. I know. The nightmare.

Keeping busy helps. Right now I'm staring at the vacuum cleaner. I'm staring at it thinking "I just vacuumed the house. And I did that after running a 10k race on the coast this morning." That's messed up.

Look, I needed to do something. It's 4 weeks to the Oregon 24. There aren't any mountain bike races and it's pushing 95 out so going on a nice long bike ride isn't in the cards anyway. Besides, the house really needed vacuuming.

I'm not really a runner. I've done a couple 5k trail runs and the Mt Ashland Hillclimb which was more of a stupidly fast hike than a run. Mostly I do the races out of solidarity for my sister; which is kind of dumb because she's an ultra runner and busts out 30 mile runs on a pretty regular basis, so it's not like I can run along with her, and I don't know if you've spent much time hanging around ultra runners, but before a race, they're pretty consumed with logistics and afterwards, they're not entirely sure what planet they're on; I could probably be replaced by a large stuffed animal or a quart of chocolate milk at my sister's races. But she seems to like having me around and I'm proud of her for finding the most improbable sport in the world to excel at.

I've been running once or twice a week at lunch - it beats the stationary cycle and treadmill and I don't know, I just thought I should try a race on my own and see how it went. I was pretty confident I could finish a 10k and low and behold, a 10k trail run popped up out in Tillamook.

There were a host of things I could have done this weekend. There was the Wine Country Half Marathon, which was really close and I had friends running it. It sounded great but I rarely run on pavement and even on a bark mulch trail, my back is killing me after 30 minutes. Also, my kidneys would have shut down at mile 8. There was the Providence Bridge Pedal; a 37 mile bike ride that crossed all the bridges in Portland. That's actually one I've wanted to do but I would have had to drive in to Portland and you do not drive into Portland during the Bridge Pedal because every bridge in Portland is shut down for a stupid bike event.

Highway 18 is the main conduit to Portland and the coast from our home. I decided to turn left and head to the beach. Besides avoiding traffic, crippling paradox and possible dialysis, the coast would be a good 30 degrees cooler.

The Tillamook Bay run goes up the Bayocean Park spit, over the dunes and back down on the bayside. It starts on the beach and I thought the worst that could happen was a run on the beach would turn into a walk on the beach. It seemed like a pretty good plan and actually, it was.

I got there about 2 hours early. The good news was I got to park right at the registration tent! I got my number and walked the quarter mile to the beach where the race started. I walked out and took a picture of myself at the start. 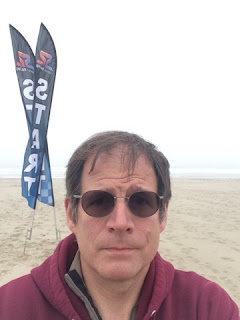 What's wrong with me? Why does every picture of me looks like it's all gone wrong.  It really bothers me because I'm basically a really happy guy.

It wasn't all that gloomy. I was there early and weather moves fast on the coast. It was foggy but bright when we lined up to start. You could tell it was going to burn off. I was grateful for the cool fog. I don't do heat well.

The start was about halfway up the beach and maybe my favorite moment of the race was when the race director said "Go" and everyone made a 90 degree left turn and ran down to the shoreline to get on more solid sand. There's something about 100 people with number plates running directly at the Pacific Ocean that's never going to not be funny.

It was fascinating watching the race unfold in front of me. And by that, I mean the entire race was running away from me and I was watching them. It was OK, I expected that. This was my first 10k and this was a local race. Half the field were high school cross country runners. I was remembering something about "age and treachery triumphing over youth and enthusiasm" but really, there was no touching them.

It was beautiful running up the coast. I suppose folks who live there do it all the time. I'm an ex-pat New Yorker who never thought of himself as a "beach person", I didn't swim in the ocean until last year. This run was right up there with hiking in the Rockies for the first time, or getting both wheels off the ground in a mountain bike race. It was so lovely running with everyone; shifting up the beach as waves came in. We ran along and I listened to breakers crash  and shoes hitting hard sand.

It was also hard. Running isn't my sport. I'd like to say I found a groove or experienced the runner's high, or could attack this in any way except underprepared brute force but it was a sufferfest all the way. Racing a bike I have a baseline fitness level and it hurts, but it's a hurt that I'm conditioned for. Running for me is just hard. You can't gear down and recover. You can't leverage experience to gain time. It's just one foot in front of the other for as long and as fast as you can manage.  Getting over the dune to the bayside of the race I had to walk quite a bit of it. Running up and down deep sand is more miserable than biking in the same stuff. If you're me, it's a twisted ankle waiting to happen.

But that was just half a mile of the race. The run back down the spit on the bayside was on a comfortable dirt road. It was surprisingly forested considering this was all happening on a big pile of sand that's probably first in line to be consumed as the oceans rise.

I finished pretty far off the back but I don't think I care. I'm 56. I did this. And I'm not invested in this the same way the others racing were. Still, it was remarkable. And it was so outside my normal world. If you're a runner, go do this race. Tell your friends.  It really was a wonderful experience.

Lisa ASMR said…
Really impressive post. I enjoyed your article and planning to rewrite it on my own blog.Abcya
8:30 PM