Being a man in his mid fifties whose sole form of recreation involves shaving his legs and riding a bicycle around in the woods wearing brightly colored spandex, I have perhaps a bit more empathy for groups of like minded people whose shared enthusiasm for something might strike the rest of the world as a tad peculiar.

I was grateful for that as I wandered around the Dutchess County Fairgrounds in upstate NY taking in the hand knit splendor that is The NY Sheep and Wool Festival - the Comic Con of the fiber arts world. We're back in NY for a visit. Carolyn is upstate with her family. I've been visiting mom. Mom was working at the festival doing demonstration weaving on an old barn frame loom in the Antique Village Museum. It was one of the quieter spots at the festival but there was a steady stream of people wandering through and she got to explain at length what she was doing. Since I'm pretty sure having your 56 year old son sitting patiently on a bench watching while you worked would be really weird and uncomfortable, I decided to wander the grounds.

Since the only thing I really know how to do with yarn is wear what it's made into, I had an odd detachment from the event. And it is quite an event! It may be the largest of its kind in America. 30,000 knitters, felters, weavers, and spinners show up for this and they're all wearing their best hand made clothing or their most obscure ironic knitting related t-shirts. Color palates leaned toward the purple. Dozens of vendors sold yarn, looms, wheels, needles of all lengths and lethality, whole garments, baskets, bags, buttons, patterns, it was overwhelming. It was especially overwhelming because I only had the vaguest notion of how it all differed and why it mattered. I know how Carolyn felt when I took her to MacWorld in 1997.

There were actual sheep filling up a good part of the fair grounds as well. Hundreds of them. Rabbits and alpacas too. Goats? Oh yes. Llamas? They have so many llamas they have a llama parade just to air them out a bit! If you could safely remove hair from an animal and make it into something useful, they were there.

There was questionable head gear too.  There's something about standing in line at the lamb sandwich cart wearing a felted cap with lamb ears that just seems... wrong.

The lamb sandwich line was fascinating. It was far and away the longest line of all the food stands, with the exception of the cider doughnut cart. (The siren call of cider doughnuts during an Upstate NY Fall can't be resisted). Nobody seemed to have a problem with spending the morning petting lambs in the 4H barn and then eating them for lunch. 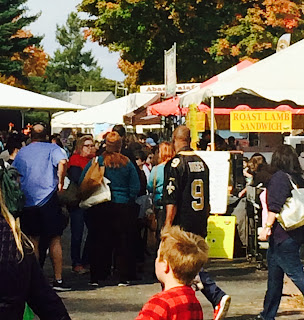 I thought a great deal about that standing in line for my lamb sandwich. I had an interesting conversation with a 4 year old behind me whose mother explained he was quite upset watching the demonstration sheep shearing.  Her son, who knew a captive audience when he saw one, talked to me at some length about the experience. I can't say I understood much of what he said but it was clear this had quite a profound impact on him. I double checked to make sure I was on the lamb sandwich line. I pondered for a moment, the terrible majesty of the cycle of life. Then I pondered the horrible existential catastrophe that was about to befall this poor child when he made the mistake of asking his mother why his sandwich was called "lamb".

I decided to wander off in search of a cheese steak.

Besides child-traumatizing sheep shearing, there were countless other events. One of my favorites was  the sheep to shawl competition. While it lacked the breathless excitement of sheep judging, it was certainly the most adrenaline fueled event at the festival. Teams compete to be the fastest to convert a fleece to a garment. Costumes score additional points. There was a David Bowie/Prince tribute team who were killing it when I went by.


I'm not sure what Prince and David Bowie would have thought of it all but you couldn't deny there was a lot of heart there. That was probably the most committed group I saw in actual "costume" at the festival. The whole event did have a serious cosplay vibe to it. It wasn't so much they were dressed as specific characters, they were all dressed up like people who go to a sheep and wool festival. The major difference between this and Comic Con was  that most of them would go home, go to bed, get up the next day and go out into the world wearing exactly the same thing!

Well, most of them.

Sheep-related performance art is an easy target for ridicule. It's also true that not being emotionally invested in what everyone around you cares deeply about invites mockery as well.  I couldn't bring myself to photograph the people at the festival with any sense of irony or humor. Here I was bearing witness to tens of thousands of people at a single, crowded event that lasted two days and I venture to say there wasn't a single fist fight. Nobody got drunk. Nobody was having a particularly bad time except for a lot of understandably overstimulated toddlers and maybe one kid staring in horror at his lamb sandwich.

Mom's been a knitter as long as I've been alive and for the last few decades she's been stockpiling so many spinning wheels and looms I barely notice the Schacht Baby Wolf I keep bumping my elbow against when I sit at the kitchen table. Most of our kitchen towels came off that loom. Mom seems to know everyone working the festival. After she was finished with her weaving, she took me over to the Fiber Connection booth that was run by a bunch of her friends. They were hilarious, kind, outgoing folks who chatted with me about everything but knitting, stopping only to help a young man buying a skein of yarn, telling him everything from the origin of the yarn to what size needles would be best for knitting it. While we were talking another dear friend Donna appeared. She and her husband have spent a few Christmases with us over the years. All of them were regulars at my mom's house once a month on Sundays for an afternoon of knitting and spinning. They come from quite a distance and have been for almost 20 years. They're good people. They're my mom's people.

My sister follows in mom's fiber footsteps. So does my niece. I understand why. This is an old craft; one of the oldest. It goes way back in our collective family memory, but also in our collective human memory. I think I also know why these crafts thrive in the age of cloud computing and smart phones that burst into flames on jets that carry us across the country in six hours: They ground us.
As I wandered a 4H barn looking for a friendly sheep or goat to take a humorous selfie with, I passed a pen with a couple Shetland Sheep. I stopped and stood watching them, children and adults alike stroking their heads, and was reminded of Walt and Ester James, who welcomed us to our new home on Finn Rd 15 years ago, inviting us to Walt's 80th birthday the week after we moved there. They bred some of the first Shetlands on the west coast and we helped them with their annual shearing festivals for years. I made lasagnas for the crew. Carolyn helped clean and sort fleeces. Mom came out a few times too. They moved back to California a few years ago and Walt passed away last year. As I stood there looking at a couple of sheep vacantly looking back at me I started to get a bit choked up. I realized I am emotionally invested in all of this after all.