After this Winter - Some thoughts on losing my way 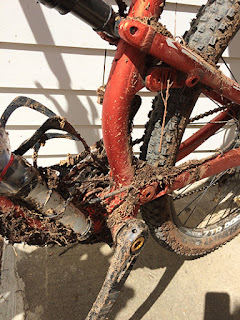 This was the 30th annual Mudslinger which means we share an anniversary! A couple actually. Carolyn and I have been together 30 years and I started racing mountain bikes 30 years ago. My race prep this year consisted mainly of gassing up the car the day before driving down to the race. I think I've ridden outside four times since Christmas. Still, I wasn't going to miss this one. I did the second Mudslinger in 1988 and quite a few after that until I stopped racing in 1996. I've done it at least six more times since I started racing again in 2008.

I finished pretty far back in the field but ahead of a few dozen racers. I wasn't the only one having trouble getting the base miles in. More importantly, I had fun. It was a beautiful sunny day for a welcome change. As I was getting changed at the car I heard Mike, the race promoter on the PA say that there were some riders who may have missed a turn and gone off course and if your computer was reading below 17 miles, let him know. I checked my Garmin.

When I got home I emailed Mike and let him know. He DNF'd me, which was fine. But here's the thing: I know that course really well and more importantly, Mike is a true artist at course marking. Even with a couple of new trails, I knew I didn't miss a turn. This got me thinking about how we follow a course and how we get lost.

What do we need to find our way? We need information in the form of directions. That begins as a published course map but also include course markings. The trick to giving good directions is to not give too many. Mike uses pink ribbon every 1/4 mile or so. Right side of the trail if a right turn is coming, left for a left turn. When the course changes, there's a pink cardboard arrow pointing to the new path and a bright green sign with an "X" and the word "No" right after the turn in case you missed the sign. Sometimes there's a pink sign with downward arrows and a skull and crossbones to indicate a steep descent. That's pretty much it. No course marshals shouting directions. Mike figured out they can cause as much confusion as they relieve. His marking works because it's consistent, stands out, and has simple hard to miss failover if you're staring at your wheel and really miss a sign.

There are two common aspects of getting lost: The actual moment of going off course usually happens in an instant, often one missed turn or instruction. The other is there is always a span of time and distance between the moment we went off course and the moment we realize we are lost. In that span of time we think we know where we are going, then doubt creeps in, finally realization. The length of that span of time generally reflects how much trouble you are in. That time is often extended because we reinforce our belief we are going in the right direction. There are people around us and they must know where they are going. We're going downhill fast, covering a lot of ground. We must be going the right way (because I really don't want to pedal back up what I just came down). Sunk cost can really stretch this out.

I'm slow enough to think about these things. The front of the field is going twice as fast as I am and those racers are operating in a head space that doesn't allow for much abstract reasoning. They just need to flick their eyes up occasionally to know they're where they should be. And I suppose because I had time to think about it, politics began creeping into my hopelessly adrift internal monologue.

I haven't been writing for a while because I've been feeling lost. I think I'm just short of that point when you stop, look around, and realize you have no idea where you are. I don't think I'm alone. In fact I think just about everyone I know is lost. Some feel pretty strongly that they know where they're going and it's the right direction but don't have a lot of evidence to support that. Some thought they did but are beginning to have doubts. Some are pretty sure they're lost but can't seem to change direction. Some are in full on "write SOS in the sand and wait for rescue" mode. Some are sure we're lost, won't be found, and seem to be taking more of a "Lord of the Flies" approach to the situation.

I know, it's a very imperfect metaphor. Still, it feels like being lost and we are experiencing quite a few of the characteristics of getting lost. We're told too many conflicting directions. We're getting positive reinforcement for the path we are currently traveling in the form of others traveling in the same direction. Retracing our steps sounds horrible. We're trying to reinterpret the landscape around us as something familiar. We disagree on which course marks are real. We're looking to blame someone or something for leading us astray.

How do we find our way? When I'm racing and I start to worry I watch tire tracks. I can see when racers have gone before me. No tracks, I'm lost. I don't think that scales up for our country. It's like there are are tracks everywhere. Course marshals screaming directions at every turn, racers going in every direction. Some of them look like they might be violent. I admit, I honestly don't know what to do and I'm afraid I'm just going to stay lost for a while.

Back in the real world, I finally loaded my data up to Garmin's website, looked at my route and the course map and I was right, I didn't go off course. I sent the data to Mike and he confirmed it. The mileage drift had to do with where Mike started his computer and where the race actually started (1-1/2 miles down a dirt road after a neutral rollout).  He's reversing the DNF which is great, though I can't help thinking I could have avoided the whole thing by looking at all the data I had, and really thinking through the race and what I did. The truth was right in front of me. At least I knew where I was going for a few miles in the woods. That's something these days.