Magic.
Before I flog that metaphor to death, I should say that Hawaii wasn't paradise. It's a conflicted place filled with a wide array of people who have some ownership of the place but can't entirely agree on what it should become. But it wrapped us in its arms and welcomed us and there was something.

What was that magic?

Was it any different than what others feel when they come here? Maybe it was as simple as experiencing something new in a place we've never been. We've never thought of ourselves as typical tourists, I suppose nobody does. People come here with nothing but a plane ticket or reservations to to the finest resort the world has seen. Does that change anything? Just because you arrive on a cruise ship or spend your evenings at a five star resort doesn't mean your experience of a place is any better or any worse than ours. When Carolyn and I traveled together in the past, we tried to avoid the "tourist experience" unless that was the only way to experience something (I'm looking at you Vatican!). This trip we parked ourselves in the most touristy part of the island, complete with a horrifying America-themed cruise ship straight from a John Ashcroft fever dream blocking the horizon.

And you know what? It was fine. It was where we wanted to be. Most of the people shuttling on and off the cruise ship were not much different from us.  I've never been swimming in an actual ocean. We've never been in a kayak together. We knew almost nothing of Hawaiian culture. We were pale. We were overdressed. Locals knew who we were and it was fine. We got to let go of all the performance anxiety of pretending to be something other than what we were; tourists.

Giving up on blending in made it easier for us to ask dumb questions about history and pronunciation. Giving up on the bucket list of destinations let us slow down to go see petroglyphs at the bottom of the Chain of Craters Road instead of flowing lava in the national park. 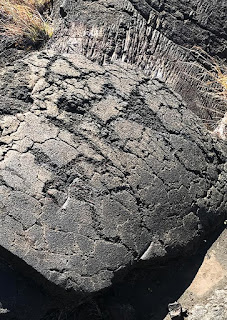 We saw Pu'ukohola, Kamehameha's temple, built with a 20 mile long line of men handing rocks down from the mountains. Our enthusiasm for what we learned there made us very popular with the docents at Hulihe´e's Palace in Kona, who were so grateful some tourists came in and were genuinely curious about the place, the objects on display there, and what it all meant to modern Hawaiian history which, by the way, is fascinating.

Carolyn thought the most magical thing was my discovering I loved being in the ocean. I really did. The kayaking/snorkeling trip in Kealakekua Bay to the Captain Cook monument started it and it never let go.  If there were people in the ocean, I would be there too. We hiked to the green sand beach near South Point, the southern most point in the United States. The surf was rough but there were a few people in the water body surfing. Carolyn was walking ahead of me, turned around and I had jumped in to join them. She couldn't believe it.
Believe me when I tell you, I have never before been standing in the water, turned around and seen water above me with a sense of purpose.

I don't think I said the word "bicycle" once the entire trip.

As the week went on, Carolyn's allergies went away. We slept better. We drank less. We began to get a handle on pronouncing things.

And on the night of Carolyn's 65th birthday we kayaked out to look at manta rays. And we saw them; 10 feet wide swimming inches from our masks. And yes, there were probably 100 other snorkelers within a hundred yards of us. I don't care. We all loved it.

Carolyn is 65 now. Our world is changing. We can't keep keep up with where we live much longer. It's a beautiful place but the pollen makes Carolyn sick. What I do for a living is going away and I just hope the old Web and I age out of the market at the same time. I might just make it. We are going to lose Carolyn's parents soon. We are talking about what we can do during our "active life expectancy" where we're healthy enough to travel confidently under our own power.

But for a week, we were someplace else and while we were there, we felt windows open. We felt the real magic, the old magic that carried us up mountains in Nevada decades ago. We have walked this Earth together for 30 years and at the moment we were feeling like we'd done what we set out to do, we found a place where we journeyed as equals, discovering things at the same time. We swam together. We ate poke together. Be bought board shorts together. We have so much more to do! And that, my friends, is magic indeed. 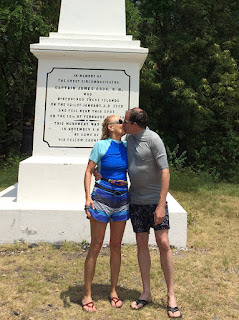 samish leather said…
Interesting article! Thank you for sharing them! I hope you will continue to have similar posts to share with everyone Scorpion Drive Jacket
9:24 PM