A Strange Sort of Good Day

Let me tell you about Monday. 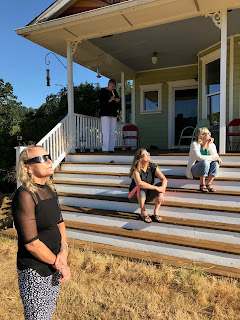 It started with that total solar eclipse. You saw it or you know someone who saw it. We filled the house with a remarkable collection of friends and family who came from all over to see it. My mother flew in from NY, My sister-in-law Janet flew in from NY. Liz came out from Portland. My old assistant Nancy from my theatre days took the train up from LA. We haven't gotten together in over 10 years. She brought two friends Christa and John who we've never met but they settled right in to the goat rodeo of food wine and conversation that is our home even when it's just Carolyn and me.

Oregon outdid itself. The clouds went away, the traffic jams (mostly) didn't materialize. We parked on the steps of the front porch and watched it grow dark.

And the eclipse? It was more amazing than every art rock album cover from the 1970's. It was the sun. It did that. Right there in the sky it went dark and the corona was shining and we stood in our field with friends and family and watched it happen and when the corona appeared and we took our glasses off,  we cheered and our neighbors who had Cat Stevens and Pink Floyd blaring from their truck stereo cheered and we all left ourselves behind and for one remarkable moment, we were collectively awed and humbled. 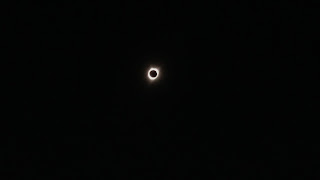 And then I went to a funeral.

More specifically, I went to scatter the ashes of Walt and Ester James, our neighbors from across the road. They were in their 80's when we moved here in 2001. I remember the first day I was here waiting for a guy to come and hook up our propane line, Walt walked up our driveway and invited us to his 83rd birthday party where we were introduced to all our new neighbors and we knew that we were home.

Walt and Ester were the pillars of our odd community and everyone respected and loved them. They moved to assisted care in McMinnville around 2010 after Ester had a few bad falls. Eventually they moved to California to be closer to their kids and we lost touch with them. A few years ago Bob and Eileen, close friends of theirs called to say Walt had passed away. A few days ago they called again to say Ester had passed last year and their kids were coming up to scatter their ashes on their old property.

Everybody at our house was asleep when Eileen called to say they were on their way. After the eclipse, everyone just collapsed. Long nights visiting, sitting on planes and trains, cleaning, cooking had all taken their toll. I walked over and visited with Charles and Jennifer, the new owners of the property who welcomed Wayne and Lee, the James' children, with open arms when they arrived with five shelties and the ashes of their parents.

After a long visit to see the changes to the home and land that had happened since Walt and Ester left, we walked through the pastures to the "Trillium trail", a little path up a wooded hill at the far end of the property. We all took turns spreading their ashes along the trail, at the base of trees and along a small creek. Eileen read a few short versus from a book that was given to Walt on his 30th birthday. The dogs sat patiently enjoying the cool shade. I looked at us all, 16 years farther down the road. I thought of all the spring sheep shearing festivals we did with the James'. Mom would fly out to buy fleeces, I'd make lasagnas for the crew, and Walt and Ester would mark another year as a great success.  I thought about the Christmas we had 18" of snow and my sister's family drove up in time for us to lose power for five days. We all went down and shoveled the snow off their sheep barn roof to keep it from collapsing. Joe kept throwing Maddie off the roof into a snow bank. She was 14, I think. She's 22 now and except for losing most of her right pinkie to a log splitter a few years later, she survived her teenage and college years an intact and wonderful adult.

I thought about the wear and tear and outright damage that accumulates as we grow old. I thought about Carin, Maddie's cousin who was killed in a bike accident in 2012. She would have loved the eclipse. My friend Nancy has had two tough battles with cancer that just didn't seem to faze her. I thought about my cancer, hopefully long gone. I thought about what we've lost as the years went by.

But I can't say I was sad. The laughter of the present is where we live now. As it got dark and we finished dinner Carolyn and I dug out the battered box that contained the "Costume Shop Fantasy Dream Date" board game; the game made by the costume shop crew for my 30th birthday and only played once before I was spectacularly sick from the 8 shots of tequila it took to get just halfway around the board. On reflection, a thoughtful book of verse might have been easier on the liver. We kept the game because it was a work of art and a monument to the bad decisions of youth. We've lived long enough and well enough to look back at that box with a degree of fondness.

When I went upstairs to go to bed, leaving rooms of laughter downstairs, I was happy the sun rose, briefly went away, and came back again and we were there to see it.

And I was happy to know Walt and Ester were finally home.

Unknown said…
Wonderful day
Looking forward to seeing the next one
7:32 AM