September will be my 40th high school reunion. It's funny, but for all the things I've experienced, all the people I've known and the places I've seen; I'm still tied to those people and those years in the late '70's in Rondout Valley in upstate New York. I was always a bit of an outsider there. We moved to Stone Ridge when I was in 4th grade and it felt a bit like wandering into a conversation that had started a long time ago. But I found friends and though most of us didn't stay in touch until Facebook showed up, they have turned out to be durable friends. I suppose we were bound to measure ourselves against the people we knew in high school. But I've also grown to realize these people defined home, the place I left in 1978. It felt like we were just figuring out how much we cared for each other right about when we graduated.

This reunion has a good deal of momentum behind it, thanks to Facebook. As we've become reacquainted in the last couple years. I'm impressed with who we all became. It's not that we all got rich or solved the world's problems, though a few of my classmates appear to have done pretty well for themselves. and a few went a good deal farther to make the world a better place than I did. It's more that we've come out the other side of life and I still see the people I liked/admired/had a crush on still standing. It makes me proud!

There's a Facebook group for the reunion with an assortment of threads on venue, photo archives, looking for lost classmates, that sort of thing. A few days ago someone started thinking about our classmates who had died. It opened a strange, touching thread of memories as names came back. Some of them I didn't know. Some I did. Tyrone Dumas and I ran 440 relay together. A long time ago he taught me a lesson about self respect that I carry to this day. I learned he was killed in a robbery in the '80's and I was so sorry. One of my classmates mentioned Daryl Hoffman. He was one of my best friends. He left our school system right before high school and went to a small private school in Kingston. His family moved to Minneapolis my junior year. He took his own life the following year.

Though he went to a different school, we stayed close through high school, largely through Boy Scouts. We had another connection though. Daryl and I were part of an odd four person club. We called ourselves "The Stone Ridge Underground". We even had t-shirts. We were a posse before there were posses. We bought ad space in the back of the 1977 (I think) yearbook. Mike Anderson, Daryl Hoffman, Paul Pomeroy and I weren't very much alike but our friendship was grounded on doing great things in the outdoors and my God the things we accomplished! We blew off Junior prom to go winter camping. We spent most of our New Year's Eve's in snow caves. Thanks to Boy Scouts we knew first aid (Mike would go on to be a paramedic). We knew how to build a fire and tie knots and really, you would have wanted us around in a survival situation. 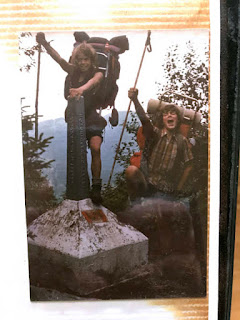 This photo lives in one of those adhesive-backed albums with acetate that folds over on top of the photos on each page. It's been trapped there for 42 years. I can't pull the acetate off without destroying the album.  Like a fly in amber, it's a bit of the past projected into a present it doesn't belong in. The browning of the page, the brittleness of it, speaks to the decades that have passed and a time and a life that is lost.  It's a picture I took of Paul and Daryl 26 days after the three of us were dropped by my mom at the Massachusetts/Vermont border. We had just finished walking the length of Vermont on the Long Trail. We were standing at the Canadian border.  I was 14 years old. Daryl and Paul were 13.

As I write about it, it seems so improbable and ill advised. We were so young. No responsible parent would toss their kids into the woods like that now. But it was a long time ago and we were so good at what we were doing. It's embarrassing to admit but in an emergency, I was better prepared to shelter you, feed you, or fix your injuries when I was 14 than I am now at 58.

Daryl handled the logistics for the journey. I was reminded by another one of my classmates that he had a head for math. I had forgotten. We chipped in the money and he ordering a month's worth of dehydrated food for us and arranged mail drops for us to resupply every 9 days when we crossed into civilization. We were so well prepared we gave away extra food to hikers who had run low as we got close to resupply drops. For nearly a month we were never hungry, never in danger, and never lost, which was remarkable considering we left our Long Trail guide at our campsite 3 days in and finished the trail using a AAA road map that had the trail marked as a dotted line the length of Vermont. We walked that dotted line to its end. I marked off our progress with a ball point pen each night. That photo was the end.

One of the surprising things we learned after we finished the Long Trail was how hard it was to re-enter our teenage world. A month in the woods will do that to you. Our friends asked us what it was like and we'd just stare at them stuck with this sort of aphasia. We'd only been alive a little over a decade. How could we possibly have the vocabulary to tell anyone what it was like?

The summer after we walked the Long Trail, Daryl set out by himself and walked from the the same starting point and hung a right about 90 miles in and followed the Appalachian Trail to Maine, a 350 mile hike.

In those years before Daryl moved west we spent weekends peak bagging the Catskills. By the time he moved, we were members 258 through 261 of the Catskill 3500 Club, having climbed all 38 peaks in the Catskills above 3500 feet (four in winter). The youngest members, I'm sure.

After Daryl moved west, Mike, Paul and I took up rock climbing. I mean, the Gunks, c'mon! They know about them out here in Oregon! Mike and Paul got quite good at it. I didn't. Still, it was such a great time.  Getting stung by wasps on CCK or struggling through an especially tricky 5.9+ were a great way to spend an afternoon without the time commitment of backpacking.

The summer before my senior year, Paul and I rode our bicycles from NY west, picking Daryl up in Minneapolis and riding as far as the middle of South Dakota before broken bikes and my need to get back to take the ACT's cut our trip short.

Less than a year after our bike trip, Daryl killed himself.

I remember the phone call from his sister Deanie. I remember her saying "Daryl killed himself today." and I said "What?" And I remember her sobbing and saying "Daryl killed himself today." and she might as well have been tattooing it on my chest because it's inked forever into my life, and I didn't know what to say because like re-entering the world after the Long Trail, I - we had no vocabulary for that kind of experience, that kind of loss. When I called Mike and told him, the first thing he asked me was "Why?" One more tattoo.

Daryl's death still follows me around; the ugly parrot on my shoulder. A bad mistake, a failure to act, a loss that should have been prevented, a reminder that it's all so fragile. But I've learned to exhale and remember we have what we had; and we had so, so much.

There was, in the 18 years that Daryl Hoffman walked the Earth, a very rich life that I was a part of. It was twice as bright. For a few precious years, we walked in that bright light together.

There's another old picture of Daryl that that sits on a shelf with some equally old patches in my office. I took it when Paul, Daryl and I did a two day trip to pick off a few lower peaks below Cornell maybe in the Fall of my Junior year. I think this was close to the top of Peekamoose mountain. It's Daryl, where he belonged. I know you can't, but I want you to remember him the way I remember him; totally at peace with himself and where he was, off the map on a mountain with no trail but the path we made up ourselves. 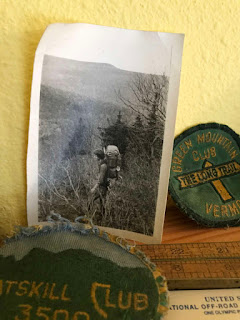