I've mentioned numerous times over the nine years I've written this blog that Joe and Maddie got me back on my bike. Reading over the early posts from 2009, I realized that there was a whole year between that re-acquaintance with biking and my first post. That year was the beginning of maybe the longest journey I had with Joe; the one on the bike. I think it's important to fill in some of that story.

Riding a bicycle has been a part of my life off and on since I was a child. I stopped for a few years after my 2nd bike got stolen at college around 1981. I picked it up again in 1987 when mountain biking first got popular.  I don't remember the exact year my sister and Joe got together. Maybe '89 or '90? They met on a group bike ride. Joe and I bonded pretty quickly over bikes. I may have been racing a few years longer than he did but he was always better. Always faster. We didn't do a lot of races together. I remember doing Spring Thaw in '91 or '92 with him. I thought I was fast back then. He absolutely killed me in that race.

Life moved on. Joe and Mallory were new parents. Carolyn and I bought a house. Organized mountain bike racing had its peak, became an Olympic event, and then flamed out. Mallory, Joe and Maddie moved to a cabin on Tyler Creek road, way up in the mountains above Ashland.

In 1996 I raced the Weaverville Classic in Northern California. I did it on the way down to Oakland to meet Carolyn at Gil and JD's. I did the race as a side trip on the way down Gil's for a memorial for a friend who died of AIDS related illness. He was one of the last of a terribly long list of acquaintances, friends and loved ones who fell to that terrible disease when there was no way to treat it.

It was a great race. I had fun. As it turned out, it was the last race I did for for 12 years. Other things got in the way. Maybe it was the emotional toll AIDS was taking. Maybe I was just bored. We left the theatre. I got a job at a college. We sold the Portland house and bought our house in the country. We were busy. Our bikes hung forgotten in the back of a barn we never could have imagined owning.

Somewhere in those years Joe rode his bike across America. Maddie got older. We started spending our Christmases with my sister's family. They started coming up with bikes on the car. Then it was a Westy camper van. Lo and behold, 2008 rolled around and Maddie was doing junior races and Joe was restless following her around the short courses. The two of them prodded me back on a bike to race with Maddie so Joe could race with the elite riders where he belonged.

At over 200 lbs, I could have raced the Clydesdale category but I didn't know it existed. Instead I lined up with the rest of the Cat III's at the Spring Thaw in Ashland. I rode my 1988 Bridgestone MB1 with a classic Manitou fork with maybe an inch of travel. My kit was all black. I thought it would hide my weight but mostly it made me look like a mime that had let himself go.
Joe took off on the long course. Maddie and I ground up the climb on the short course. I remember telling Maddie I'd give her a dollar if she cleaned the steep climb from the road to the White Rabbit trail. She did it. I gave her the dollar in quarters. I remember crashing on top of her on a nasty dropping right hairpin corner on the BTI trail. I was laughing so hard. Maddie placed 1st in beginner junior women. Joe placed 5th in Cat II. I placed 7th (out of 10) in beginner men 40+. I got some nice swag in the raffle. As we were laying in the grass in Lithia Park people would walk by my bike and marvel at it, the way people do at vintage car shows. I got hooked again on a sport I had let go of more than a decade ago.


2008 to 2013 were the "family years" of biking. Most of this blog is filled with stories from that time. We'd go to the races together and cheer each other on. We did Christmas day bike rides for a few years in there too. Carolyn didn't race but she was biking again as well. For Christmas in 2008 Joe restored her 1988 Trek road bike. That was the snowstorm Christmas with no power for 5 days.  It was months before she could ride it. 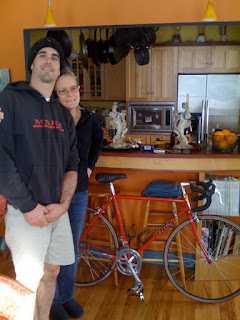 Any time we got together there were bikes involved. Joe loved the tandem and we'd take turns stoking for him on it. It was the one way we could be sure he'd stay with at least one of the group.
The truth is, we rarely rode along side Joe. He'd usually shoot off ahead, find some side road or trail to explore, circle around for a bit and then go back to find out what was taking us so long. And when were were turning for home, he would grab a couple candy bars from us and go knock out another 50 miles.

Joe was pretty intense when he raced. We knew we had to leave him alone at the start of a race and especially at the finish. In 2011 he won his category in the Mt Ashland Hill Climb. He crossed the finish, kept going and stopped maybe a 100 yards down the road and just stayed there straddling his bike. Carolyn watched him go by and discouraged people from going to check on him. In a few minutes he was back in the crowd with a beer waiting for Mallory, Maddie and me to finish.

That was the other thing about him. He'd wait at the finish for us like a puppy. He was so proud of us no matter where we finished in the field. The simple fact that we did it and came back and did it again meant so much to him and it should have. He had a big role in getting us to do it in the first place.
Life moved on again. I've written about that movement here many times. Sometimes it was magic; sometimes loss. The last time Joe and I raced together was Spring Thaw in May of 2015. The same race we first did together in the '90's and the same race they got me back on the bike with in 2008.

It's 2018 now. I still do a race or two a year. A wall in my shop in the barn is filled with number plates from my races. I didn't win any of them. It doesn't matter. They represent my collective experience doing something a bit odd that has a deep family connection to me. I always think about my family when I tie a number plate to my handlebars.

Last Saturday my sister let us know that they've discontinued treatment for Joe's cancer and called in hospice. They never did find the primary. I suppose it's no surprise that a guy as strong as he was would acquire a cancer so strong it would sweep his life away without ever letting him know what kind of cancer it was. And I can't help thinking this is just like Joe, racing ahead to the end of his life leaving us to catch up.

He's with his family now. It's grown quiet down south. I'm so sorry this illness has come for him. I hope he knows how much he has meant to me. He gave me gave me back something I had left behind. Maybe I gave him something. Maybe we all need someone to pick up and encourage; someone to cheer on as they try to be better than they were.

Maybe all we need is to matter to someone, to leave a mark, to change someone's direction. He certainly did that for me. 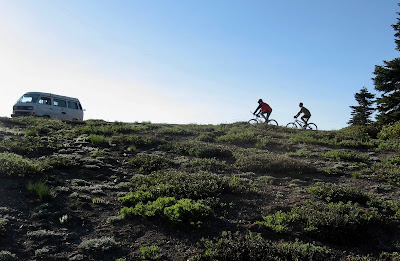