I should begin by saying I was never wired to enjoy high school reunions. They share a slightly guilt infested part of my brain with California Interstate fruit inspection stations. I know fruit inspection stations are important for protecting California's crops, and it's not much of an inconvenience to stop and talk to the inspectors, but I'd rather not have them find the bag of apples I stashed in the trunk. They let me through and then I feel like crap for lying about what's in my car. Then I spend the rest of the year waiting for news of a new blight that wiped out the California apple crop that was caused by some scumbag tourist from Oregon with fly infested apples. The opportunity to see the people you grew up with should be a blessing, but if fills me with dread that they'll find out I didn't really amount to much and after a few minutes I'm kind of boring and God help them if I start talking about my job. Afterward, I just dread the pictures that confirm that on top of everything else, I'm unphotographable.

It came as something of a shock to wake up Sunday morning after my 40th high school reunion and realize I had just been to one of the best parties of my life.

How could this be? The setup was looking pretty bleak right until it wasn't. It's no secret it's been a horrible year in my family. We put Carolyn's parents into nursing care and watch as dementia wears them away. We held a man we loved as he died of cancer. One of our cats got eaten. Then there's the obvious reality that I'm 58 and so is everyone else attending the reunion. How could this possibly be fun? I tried my best to get Trish Sommer, the one friend from high school I've stayed in touch with over the years, to come but no luck. In the end even Carolyn bailed on me and stayed upstate with her sister. I couldn't blame her.

But Friday rolled around to find me in NY on the way to Northhampton MA. In an uncharacteristic effort to own the moment, Trish and I decided to meet halfway on the Mass turnpike for lunch before the icebreaker at the Hurley Mountain Inn. If nothing else worked out that weekend, the chance to visit with Trish for the first time in 17 years was worth every second of flying and driving. We talked for four hours and the years apart collapsed and went away and we were back to two friends talking about life, our jobs, our families, and each other.

A couple hours of driving later I rolled into Hurley and a jammed parking lot at the HMI. I took a deep breath and went in to see what we've all become.

We'd become amazingly social, among other things. There were no name tags which was actually kind of brilliant. People would come up to me and I could say "I have no idea who you are" and it was OK. Everybody was swirling around in this sort of square dance of saying hello and catching up for a couple minutes before being swept away by someone else who wanted to talk. My friend Nik was there. We'd connected a year ago when we were both home. It was good to have an anchor with a familiar friend but we both kept getting pulled away before we sat down and grabbed a quick burger. Late in the evening a woman kissed me before heading out the door and I had to dig out one of my old yearbooks at mom's to find out who it was. Some of that fun was simply seeing people whose lives you only knew from the curated window of Facebook there in the flesh. there was a surprising inclusiveness about the evening. And then someone I knew, someone who was always parked in the back of your mind for decades would come in and recognize me and like my lunch with Trish, the years would collapse and there we were. As the night wound down Frank Sirico bought a champagne toast for the whole class and I left with the strange feeling that something special was happening.


Saturday I did a hike at Mohonk with a small group of classmates led by Kimberly, one of our reunion organizers. It was a wonderful counterpoint to the previous evening. We walked in the woods and talked at length. I climbed the cliffs here when I was in high school so it was a treat when Alan Sands and I broke off from the group and climbed through the labyrinth past old climbing routes I did or tried, and up to Skytop, the lookout that frames the views of the valleys for miles. On the walk down I learned that Alan was a stage hypnotist. Over the course of the weekend I learned that my classmates had become hypnotists, poets, photographers, writers, musicians, engineers, the mothers and fathers of brilliant children, and just folks who had turned into the most interesting people.

I misread the dinner invitation and arrived late to Saturday's dinner so I missed the group photograph. It was just like me. I skipped my senior picture in high school for some self-absorbed and ultimately pointless reason. I guess it confirmed that in some situations, I really am unphotographable, but that was OK.

Over dinner, I got to sit with Nik and his wife Joanne who was a year behind us at school. She's a flutist and an album she produced an played on is nominated for a Grammy. I was so impressed with what she and Nik had done in their lives but I also knew her father had passed away recently, which was a sad milestone and one I knew was repeated in different measures with everyone at the reunion. The hard truth is nobody gets to our age without getting hurt. To varying degrees we got sick, we lost jobs, our spouses, our health. We watched our parents age and sometimes disappear. We saw loved ones die. Everyone I talked to, everyone, had the eyes of our parents; eyes that have lived with loss. And that, among many other things, held us together as equals. The losses of my past year didn't go away but the understanding that we all carry those battle scars now somehow softened the pain just a bit.

We remembered our classmates who had died. There were 14. Some of them died quite recently. Some were my friends.

Then the onslaught of music from the 70's commenced and I expected that nobody would dance but everybody did because a lot of that music was really good and why not? Still, I'm morbidly body conscious and found lots of excuses not to dance until the evening was coming to a close and the last song was coming on Carolyn Elmore grabbed my arm and said "let's dance".

I had a serious crush on Carolyn Elmore that started in 5th grade. So serious I actually wrote that in her yearbook our senior year. That was 1978 and the time between then and now was a literal lifetime.  We slow danced to Bill Wither's "Lean on Me" and I learned she had a Masters in speech pathology and 3 sons and her last name wasn't "Elmore" any more and her husband was probably wondering why I was still hanging on to his wife after the music stopped. We had no illusions that we were anything except who we were; two people nearing 60 with very separate lives who were really happy to see each other and that was beautiful beyond words.

As the crowd started to filter out, another old friend Nancy Mastrocola came over to talk with us. We were really close in the last months of our high school years when everything was so important. I touched her hand and she almost cried and I almost cried and I saw all my classmates drifting out the door and away and I rushed around shaking hands and hugging people but I wasn't fast enough to tell all of them how much they meant to me; how much they shaped my life.

How much I missed them.

There are unfinished conversations. Lisa Rosakranse lives close to my mother and we'll meet for drinks and I owe her a dance. There's a big California posse including Nik and Joanne. Carolyn (my wife, who I love) and I are overdue for a road trip there. Robin Frost Bess and her husband live in Indianapolis and I wish so much that we could connect again but geography is still a formidable adversary. We'll see what we can do.

One of my favorite lines from "Grosse Point Blank"- the best reunion movie ever,  is "There is no "us" here." That was always my fallback when I thought about going to reunions. It turns out that wasn't true. There is an "us" here. There always was. I'm proud of where I came from. I'm proud of my classmates. You all turned out just fine. So did I. 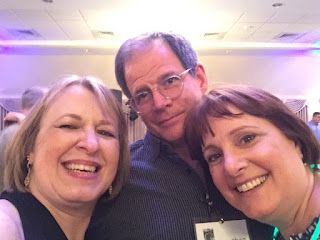 Maria said…
OMG Jonathan..this brought me to tears. I know we really didn't know each other in school that well but I always knew who you were and I wished that I could've spent more time with other classmates like you and others. There were so many people there it was hard to get to everyone. I just wanted you to know that what you wrote here touched my heart and thank you for writing this. I wasn't that close with Nancy either in school but I knew of her and soon found out that we are practically neighbors and became FAST friends with her and her husband Eric..they are fabulous and gave me a ride to and from the HMI Friday night and to the Reunion and back Saturday night. Those two nights were MAGIC!!! It was also emotional. I know Friday night after the Hurley Mtn. Inn I broke out the Senior yearbook and was looking at everyone's picture who I saw that night. Thank you for this and thank you for coming to the Reunion and HMI just to make it that much better. Thank you..Peace and Love my friend!
9:25 PM

Jonathan Pierce said…
Thank you so much Maria! Half the reason I wrote this was so I didn't have to let it go just yet. I wish the night was longer and we could have all just stayed there. Like you there were people I wasn't that close to in school but now it doesn't matter and I wanted to know what their lives were like.
11:42 AM

Diane Carabetta said…
Wow! Johnathan, I enjoyed your story, seeing you and having a great time with our classmates! The organizers, especially Geri, did an incredible.
1:49 PM

It was good to see you, the night was wonderful, everyone seemed to be happy to be together. Sincerely, Jean Dennin
6:30 PM

Matthew Kates said…
Wonderful accounting of the weekend!
You were someone who I said hello to but wanted to chat with more. Somehow it didn’t happen.
I had the exact same feeling as I walked into the Hurley mountain Inn.
7:26 AM