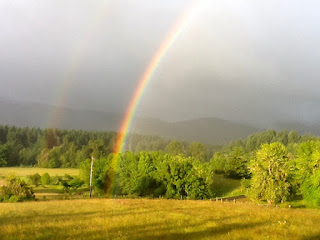 We have news. I'm taking early retirement from Linfield and Carolyn and I are moving back to NY next Summer.

That's a relief. I'm glad I got that out there.

I suppose some explanation is in order. OK, maybe a lot. This will take a few posts but here's the run-up.

A few days before Thanksgiving, Linfield offered early retirement packages to college staff of a certain age. Being of that certain age, I was given a severance offer. My initial response was "It's too little, too soon." Both those things were true.

We had been talking about moving East for some time. So we tried it on over the holidays. While we were wearing it around, we were able to sort of detach ourselves from the habit of living here and be honest with ourselves about how we felt about it. The truth is, we're in a rut. We're bored and we're lonely and we want to go home. NY is home. Always was. Now that my sister has moved back there and Maddie is living in Colorado, we have no family here.  With the exceptions of Jim and Wendy who always pay us a visit on their way to visit family, and our brave friend Liz who teaches at Linfield and stays with us despite being deathly allergic to cats, nobody comes here anymore. We're as happy together as we ever were but we miss other people. We miss community. We miss our family. It's also getting harder to take care of this place. Neither of us want's to work as hard as we are keeping the house and the land in order. We can't keep at it with the energy we had 18 years ago. We talked to friends and family and nobody thought it was a bad idea.

The following Monday I let Linfield know. I want to say it was a hard decision but it wasn't. We've done big changes like this before. There's always sacrifice and risk and it's always been the right decision and we've never looked back. Carolyn and I are actually pretty good at this.  The lump sum payout from Linfield will get us moved and if we get a good price on our beautiful house on Finn Rd, we could buy a modest home outright in Albany.

Yes, we're trading beautiful Oregon for a faded rust belt city with even shittier winters. I know what you're thinking: "OMG WTF How could you be bored in Oregon? What's wrong with you people? Oregon has mountains and rivers and a hipster city! You can raft, hike, throw axes at a bar, mountain bike - you can ride out your door and up into the mountains and ride for days for God's sake! You can't do that in Albany! In Albany you can ride out your door and get hit by a bus!"

These are all good points. I'm not sure I have a good answer. I should say Albany does have some perks. Carolyn's sister lives there. It's close to all our family in NY. It's only an hour from Windham mountain bike park and the northern Catskills. Albany is a diverse city with a ton of affordable housing stock. The least the sausage is better there too.

And we did all that stuff except for the axe throwing. We're still doing that stuff. It's just that it feels like we've taken everything we wanted from living here. The saplings Carolyn planted are trees now. The house is as complete as we're going to make it. It's been a wild time. Just living on Finn Rd was a journey unto itself that encompassed our marriage, a bunch of family Christmases, a couple goats, untold numbers of cats, painting, digging, building furniture, thousands of great dinners, wine on our porch while the sun set after a hard day fixing the place up, gardening, learning about native plants, learning to make wine, learning to sell wine, rediscovering biking. It's been an incredible journey. But that journey came to an end in the last couple years. I can't say exactly when but I like placing it on the day of the solar eclipse last year. A sky full of portent. The optics were fabulous.

That was also the day I helped scatter the ashes of Walt and Ester James at their former home across the road from us. Those events began a reflection on home, life, and death that continues even now. Since then my in-laws stumbled and fell into nursing care and we watch as reality twists and slips and contorts itself until it's finally free of their grasp. Still, my mother in law wants nothing more than to go home, even though she can't remember where it is. My sister resurrected her home to take care of Joe in the last months of his life. Now she's in NY trying to make a new home for herself. Our friend Nancy is in the hospital being treated for cancer. She's fascinated with the process and unfailingly cheerful, keeping everyone there laughing. But I know all she wants to do is go home to her pets and her projects. Home means something essential to us all, and our current home has lost some of that meaning.

Maybe the loss is part of it too. Staying here feels like whistling past the graveyard. Life is moving and we're not. It's time to start a new journey while we still have the energy to do it. It won't look like what we've done before. It's not supposed to this time.

My employment at Linfield ends June 30th so it's not goodbye yet. There's lot's to do between now and then and lots more to tell you as we get this show on the road.