We're moving away. I've tried to write about that journey and failed miserably. So I'll start with this: I'm sitting in a chair bound for a thrift store. Behind me is a cot and a sleeping bag where our living room used to be. I've been looking at photos of our home and I'm reminded of what home was. It's not this. I'm squatting in the shell of our old house.

It's OK. We figured out a long time ago that home was where we could cook a meal together and sleep in the same bed, or at least in beds close enough together that we could say goodnight to each other. At the moment, Carolyn is in NY with her sister and our cats, so this isn't home any longer.

To paraphrase Edna Mode: "Nevertheless, here we are."

I thought I would have more to write about moving back to NY. It's certainly a rich topic. Moving from Oregon back to NY is as big a change as moving to Oregon in the first place. That happened before the internet so I'll just have to leave that to your imagination. This. This is huge. But I'm having trouble framing it. It's not done yet so I can't tell the story. It's just hard to write about things while they're happening, and moving is happening. But now that all our stuff is gone and my partner is gone and our pets, such as they are, are gone. I'm left to wonder about this change and what we have left behind. 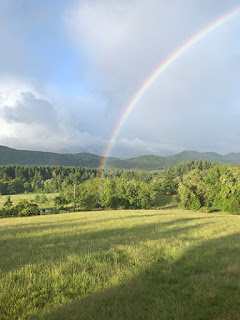 Yesterday morning a rain shower blew by and deposited a spectacular rainbow that ended right at the bottom of our driveway. I took a few photos and looked at it and thought about how much I would miss that view, and I began to tally up the things I would miss. It wasn't a grievance list by any means. We chose to leave and I'm ready for a change. It was more like counting beads on a rosary, at least I think that's true. I'm not Catholic, but like astrophysics, I like to hang around it.

I'll miss the crazy beautiful light here. The kind of light Impressionists left Paris to find. The kind of light Georgia O'Keeffe left NY to find in Santa Fe. The light that deposited rainbows at the bottom of our driveway almost as an afterthought.

I'll miss the west sweep Gooseneck road makes right after you turn on to it from Hwy 22. The valley opens up and you feel how special it is. It opens its arms to you.

I'll miss what we made our house.  I won't miss the work it took to keep it running. But I'll miss the kitchen that opened into our living room and looked out to the mountains. I'll miss sitting in the living room talking to Carolyn while she cooked.

I'll miss the evenings sitting on the porch and Carolyn telling me she was so glad I brought her here.

I'll miss the friends we made here. All of them. Because we lived so far away from everything, we didn't see them very often, but we knew we mattered to them and they mattered to us in so many ways.

I'll miss the Salem Area Trail Alliance. They got shit done and they were the only bike club that was ever actually happy to see me.

I'll miss the Mill Creek loop and all the wild stuff I saw up there.

I'll miss the potato button on the microwave. It had one task and it did it flawlessly for 18 years.

I'll miss the barn cats. The new owners have somewhat reluctantly adopted them. In trying to explain that they weren't pets but something else; I settled on "house spirits". I think that's pretty accurate. I'll miss our house spirits.

I could go on. Here's the thing: We've been missing a lot of those things for some time now.

A good hint that it's time to move on is when you begin to frame your world in the past tense. So much of our present was framed by "we used to..." We used to bike. I used to ride the Mill Creek loop. Carolyn used to collect seeds. I used to race.

That's inevitable as you get older. Some things end and all we have is the memory. Our magical bicycling years wound down. Maddie is an adult now. Her cousin died. Her father died. Life moved from progression to hard stops. Our lives will too, but before that happens there's time to shake the tree again to see what falls out.

As I'm finishing this post, a week has past. The new owners have taken possession of the Finn Rd. house. Harpy bailed days ago. India ran away when I tried to pet her. Our world on Finn Rd is finished. I've moved out and I'm staying at Anne's loft in Portland; the same place we stayed before my cancer surgery. Carolyn and Janet fly out at the end of the month and we'll drive our cars East with a couple stops in Nevada and Utah. Our offer on a house in Albany has been accepted and our focus has shifted from the past to the future. The things I miss are safely in the past now.

As I was making dinner tonight, I noticed Anne's microwave had a potato button. All is not lost. 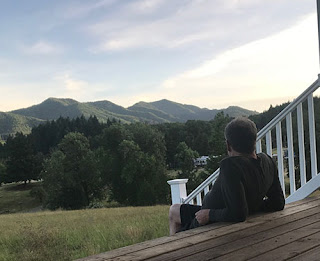 carol said…
Oh my goodness, that was so beautiful and so sad. I love your writings. I believe you should spend more time writing books. Or doing whatever makes you happy. I will miss you.
11:01 PM

Just Jill said…
You'll be missed by so many, including me. Safe Journey. I'm so impressed by your bravery. Loves!
5:52 AM

JoAnn Gilles said…
Please let this new chapter in your life include more writing that you share with, at least, me. Our last meeting was rich and full of reminders of all the good you two brought to my life. Sweet sorrow. To know we missed opportunities to connect and now the likelihood that we will again is even less. I wish you joy and adventure and new friends. And I wish for an invite to visit upstate New York (no pressure). Who knows?
We may even take you up on it.

Please let this new chapter in your life include more writing that you share with, at least, me. Our last meeting was rich and full of reminders of all the good you two brought to my life. Sweet sorrow---to know we missed opportunities to connect and now the likelihood that we will again is even less. I wish you joy and adventure and new friends. And I wish for an invite to visit upstate New York (no pressure). Who knows?
We may even take you up on it.
Hugs....
8:29 AM