The things we keep


I have so much I want to tell you. Too much, I think. I have flashes of insight about the last month but it's hard to describe without simply telling you where we've been.

I'll get to that.

First I want to tell you about our last weeks in Oregon. In the run up to those last weeks, we spent time with friends of days and years past. Our old theatre friends threw a couple of dinner parties for us. MichaeI Smith flew up from LA. Nancy Zaremski came up from Ashland. Deb Bruneaux was there too. She and Nancy managed the costume shop when Carolyn was there. Nancy was our neighbor on Belmont street for years. Cindy Fuhrman came. She' the Managing Director of Portland Center Stage, the theater Carolyn and I moved to Portland to help start.  Joanne Gilles dropped in too. She volunteered in the prop shop the first year I was there and worked with me until I left the business. Her husband Otis and I did Cycle Oregon together twice. Joan Hartzell hosted and the old theatre crowd sat around a table over a dinner that would have made the Algonquin proud. We laughed about the past, honored the craft we gave our lives to, and remembered our friends we left behind. A few weeks later Kelly Zakis hosted another dinner with Jody Pollak and Joanne Fantozzi, three stage managers we worked with going all the way back to the 1980's.


The day before Carolyn left her friend Sue came over and brought us lunch. We sat on the porch and ate and drank wine one last time. We talked about the land and the place and planning for the future. She brought enough food to feed 10 people and there's still a bag of party mix sitting on Janet's counter from that lunch a month ago.

It was so wonderful to have so many friends  come together to send us on our way.

When Carolyn flew East  and we handed off Finn Rd to its new owners, I moved to Anne's loft in Portland for the last week of my time at Linfield. After the strain of packing out of Finn Rd, the quiet there was a relief. We missed saying goodbye to lots of people out on Finn Rd and I was sorry about that. Everything happened so fast at the end. But there I was in the middle of Portland, by myself.

After regrouping for a day, I did a few things. The most important thing I did in that last week was reach out to a few more friends.

On a Sunday morning I took myself down to the Milwaukee Presbyterian Church to see their pastor, our dear friend Katie Pate preach. I've always wanted to do that. She's been our friend for 19 years but she's also the minister who joined Carolyn and me in marriage and I wanted just once to hear her deliver a sermon. It was beautiful and it was so, Katie. It was smart, accepting, challenging. There was singing. Their choir must be something to hear because there were just 3 sopranos there that Sunday (It was Father's Day) and they knocked out the descant on the last verse with so much power you could believe there were actual angels in the sanctuary. I think I saw Katie fist pump but I'm not sure. After church I had lunch with Katie and her fianceé Rahul. He's a biologist and studies tick-borne diseases. Now that I'm in NY, it's good to know somebody in that line of work. 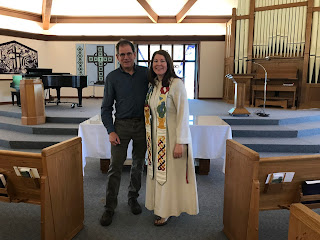 Later that week I had one of those ships passing opportunities to see another couple friends. When I arrived at Anne's loft, my old friends Renee and Alex arrived at a loft about 5 blocks away. I knew them from my days at the Computer Store back in the '90's. Renee was 19 when I met her. There were almost two decades between us but we clicked and got to be good friends. Alex was a driver for the store and they started dating and wound up married and living in Vermont. I met their infant daughter Sophia just a few months before they moved. Well, they moved back. Sophia is 16 now. She seemed thrilled to be out of Vermont and in the heart of the Pearl District. Actually, Alex and Renee did too.

And then I met up with Lolly and Ben. I met Lolly when I started doing props at PCS in 1988. She sold antiques at the Sellwood Peddler. She and her boyfriend Ben didn't live too far from us in SE Portland and we were close all the Portland years. If you've ever visited our home, you've seen a large oil painting of Carolyn and me. Lolly painted that for us in 2000.


They visited me in the hospital after my cancer surgery and the last time we saw them was in 2009 when they stayed with us on Finn Rd. 10 years later their two girls are teenagers. Eva is off to college in the fall and Nita is a fantastic dancer. I spent the afternoon at their house listening to music and dusting off the old conversation we carried for all that time.


I know listing all these events doesn't make much sense unless you're me. But it seemed important to name our friends, to write it down and hold the moment; because as wonderful as they all were, each of these encounters was also a farewell, and a lamentation for the time we didn't spend together. Why did we fall out of touch? My God I missed these people! They are caretakers of our past. They were there!

In truth though, maybe we were sad because it was so much fun before we made the life choices we made and those choices kept us apart. But if we hadn't made those choices,  we would be less than we are. Katie was finding and building a church. Rene and Alex, and Lolly and Ben and all our theatre friends were building careers and families. That takes concentration. And devotion. And it's the definition of life. It's not that we stopped caring for each other. I think we just started to lack context. Finn Road was a long way away from everyone and Carolyn and I didn't move much from there. It was hard to do. And now we're even farther away.

In the end, it just happened and can't be undone. And we continue to make those life choices that keep us apart because they are necessary. So I'm grateful we could pull of one last visit. Maybe there will be others. I know there will be others. Jim and Wendy are visiting in about 3 weeks and Liz and Tim are flying out for Thanksgiving because some traditions are just not going quietly.

I used to half-joke about not having friends. It felt that way sometimes. I spent a lot of time by myself on my bike, and the distance from everyone and everything meant that there was little casual engagement with the people we cared for. Every visit involved making sure beds were made and the pantry was stocked.

But I was wrong to say I didn't have any friends. Of course I did. The best of friends. The kind of friends who would pick up where we left off a decade ago and hold you even closer when you said goodbye because we all know it may be another 10 years before we see each other again. Or not. As Joe Strummer said, "the future is unwritten".