July 10th we loaded up our dirt and salt covered cars. We said goodbye to Anne and Chris and pulled out of the garage of their condo outside of Park City. We had a great time there and everyone was friendly and welcoming. I suspect some of their neighbors were happy to see us hit the road. At least their cars would stay cleaner. I had this feeling there was some static charge built up on our cars. It seemed like the ones next to ours began to look as dirty, like it was jumping from our cars to theirs. We ended up putting the Subaru in Chris' garage just to keep the dirt contained.

We ramped on to I-80 heading East. We had been on the road for about 11 days and we picked up the pace, covering the rest of the country in about 4 days. We had planned to visit Zack and Maddie in Durango but they were out of the country. We were also feeling the pull of our new home. We wanted to get there and get settled.

The term "flyover states" is usually framed as a mild insult to the Midwest states and the people who live between the Rockies and the Mississippi river, that people in more interesting states can't be bothered to visit. I think the term was co-opted as an insult and not a very good one.  The term exists because we actually fly over states these days. On any given holiday I was bound for NY, I actually looked out the window of a plane and thought "I wonder what state I'm flying over right now?" I don't know what else you call a state you are flying over. We also lived in Oregon and our family was in NY so pretty much the entire lower 48 states were "flyover states" in our world. Basic economy is just as uncomfortable over Colorado and Utah as it is over Kansas.

Still,  I felt a good bit of guilt missing so many friends and family members as we hustled across the rest of the country. We missed my family scattered across Colorado, Cathy McLane in Minneapolis, Rae in Omaha, my Grand Rapids friends many of whom visited us in Oregon; we would have loved to have seen all of them but time, fatigue, the future, and the myopic world of driving kept us stuck on interstates as we roared east.

On its own, there is something special about driving across the country though. The land changes quickly enough to be aware of the change, but slow enough to appreciate it. When you fly, the land is abstracted to a topographic map and you can see mountain ranges give way to prairie, it's a geological perspective and it's interesting in its own right but it's not in any kind of a human scale. Walking or biking can take you over the same transitions but it evolves so slowly, the change tend to overtake you after the fact. I remember biking across country crossing into South Dakota from Minnesota and at some point in the day looking up and wondering where all the trees had gone.

As we drove across Wyoming the mountain ranges spread out and we climbed and descended and finally dropped out of the Eastern slope of the Rockies into Nebraska. We could feel the humidity increase and we saw the flood damage that was plaguing the Missouri river basin. The trees became more dense and morphed into forests and fields as we crossed into Iowa. The green struck me. It was beautiful but a little unsettling. We used to call it "chlorophobia" when we lived out west. The forests are so much denser as you drift East.

And it's not just the forests. People are more crowded together. Out west, when a town ends, there's little human settlement until the next town. As we drove East the towns just sort of run in to each other. Of course there are farms, open spaces and wilderness, but they're separated by civilization, rather than the other way around.

As we rounded the Great Lakes we stuck our EZPass sensors to our front windows, having entered the land of toll roads, and pushed through Chicago, Toledo and Cleveland. 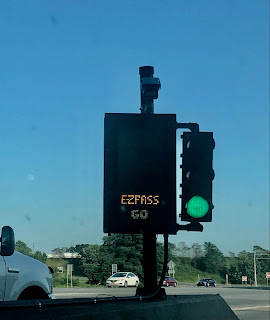 We marveled at the lousy pavement, the result of hard winters, studded tires and millions of drivers. There's more rust too. The "rust belt". Another mild insult aimed at large cities with dying industrial/manufacturing bases that also salt their roads in the winter.  I worked in a lot of those cities in my theatre days: Cleveland, Buffalo, Philadelphia; every one was special. I learned decades ago that "rust belt" was just a hasty generalization for lived-in cities that don't make the bucket list of whatever travel magazine is trending. It's a generalization that ignores the art, the architecture, the history, and most of all the people. I think it's a nastier term than "flyover state" in that it's an indictment of the perceived condition of a place, rather than a description of your relationship to a place as you travel over it.

And a day later, we crossed in to NY. We drove down the Mohawk river valley waving to Merle and Catherine as we went by Utica and the Masonic Home.  We picked up I-87; The Northway which runs all the way to Montreal and took the first exit to Rt 5/Central Avenue. 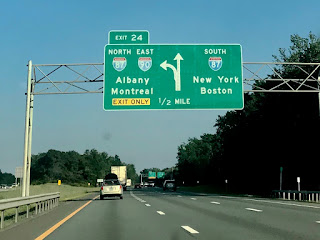 This dropped us right at the Northway Shopping Center, home of the nearest Lowes to our new home. It was also home to Empire Wine and Spirits; which has been our go-to wine shop in Albany for years. We would be crashing at Janet's for, as it turned out, the next month waiting for our new home to become available so we thought we should stock up.

From there we dropped down Fuller Road and it's insane roundabouts to Western Avenue. We continued East a couple miles until we crossed the city limits and entered Albany, the capital of New York. 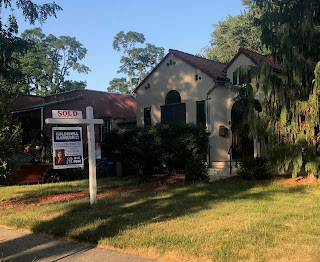