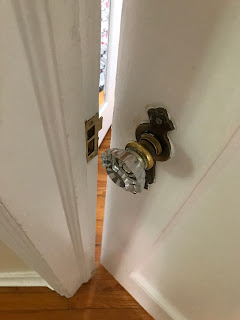 Last weekend I fixed a door in our house. I probably should have sewn masks or delivered food to shut-ins; something meaningful, something that might help in the context of the greater good.
I don't think I'm a very good person.
In my defense, that wasn't the only thing I did last weekend. I ran power to the garage. I extended a 20 amp circuit into Carolynland, so she could run her iron and a light at the same time without throwing a circuit breaker. It was not without challenges. When I cut the hole in her shop wall, an endless stream of vermiculite started pouring out. Some previous owner decided to insulate an interior basement wall with toxic cat litter. I have this theory that a previous owner's husband was trying to murder their wife with home improvement. This confirmed my suspicions. Needless to say, hilarity ensued as I tried to stem the flow gushing out of the wall while fishing cable through it at the same time. Really, a much better story.
Still, I keep coming back to Saturday morning sitting on a folding step stool with my assorted tools quietly admiring the 92 year old door to our bedroom. It wasn't even really that broken. It just didn't latch very well. You needed to slam it like an angry teenager, or pull it close and lean back with a bit of body english to get it to click. Carolyn defaulted to angry teenager though that usually took a couple tries. I preferred body english but it was hard to pull off holding two cups of coffee and trying to shoo the cat away.
None of this should have mattered. We both grew up in old houses filled with old doors we slammed or just left open because they were old and somehow had earned their recalcitrant natures. But in truyh they're not our ancestors. They're just doors. Simple machines that mechanically block one part of a house from another. They could be fixed.
So I pulled out a few screwdrivers, some matte knives, and a couple chisels and carefully scraped back the paint of a century to reveal the screws that held the strike plate to the door frame.  I cleaned them off and carefully backed them out and popped the strike plate off the door frame. I took it to the garage and scraped all the paint off it, wondering at the aesthetics of past generations. Who would think "Oh yes! Baby shit brown and sewer grey are the perfect colors for our bedroom!" I couldn't say and I can't really judge. Beauty is the discovered present, and we can't look at the past and understand what it meant to those who came before us.
I carefully chiseled out a bit less than a quarter inch of the door frame to move the strike plate out a bit to catch the bolt sooner. I took the strike plate to the garage and scraped, sanded and buffed all the paint off it bringing it back to its beautiful brass self. I piloted and set the screws in their new position and puttied the gap I created when I moved it. The last thing I did was cut a quarter inch off the protruding part of the plate that guides the bolt home. It must have a name but I don't know what it is. I filed the rough edges and rounded them a bit so it wouldn't catch clothes as we walked by. I never had to yell at it. It wasn't hard. It was detail work; something I'm not generally good at. At this particular juncture in time, it was what I wanted, needed to do.
Now, it's beautiful. It was a lovely door to start with. Glass knobs. Brass escutcheons. Solid wood. Now it closes like the day it was hung. I can nudge it closed with my hip. I can pull it closed behind me when I bring Carolyn her coffee. It's not perfect. I need to touch up the paint around the strike plate. The latch mechanism only works if you turn the knob in one direction. Something is broken inside the door. I could probably replace it with a less used mechanism from another door in the house, or shop a reproduction replacement online. Maybe I will.
But right now this is the most satisfying thing. It was an opportunity to have agency over something in a world that has gutted that premise for most of us. I'm lucky. I can work with my hands. I can fix broken things. I don't have the layer of needing to be wealthy enough to pay someone to fix them for me, or wring my hands because they can't come to do it because we're all infecting each other.
I think about the inconsequential doors we walk through every day. Sad, cheap things filled with cardboard. Dull things. But they always closed really well. Pressboard and laminates may be the work of the devil, but they're dimensionally stable and after spending 18 years in a house full of them, they work flawlessly. But I never gave a thought about who might have walked through those doors before us.
So I look at my old bedroom door and think of the generations that passed through it. And I sleep a little better knowing I'm part of that generational parade and I was the one who made the brass shine and the door close quietly 92 years after it was hung.
Maybe we'll both sleep a little better.

I was missing you guys this week. I went through your old neighborhood the other day in Belmont.

I'm glad you are there fixing your door. It's a great door. Much better than the doors near the place that you loved in Portland.

It's sad here. So very, very sad. I cried all the way home after the drive the other day.

Enjoy your world with Carolyn and give her a hug for me the next time you lovingly carry her coffee through your door. I am grateful to have lived some of my life with the two of you.