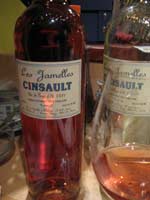 Well, suffice to say, the people have spoken. I love America. Maybe the most salient thing anyone ever said about this country is that we can go through just this kind of political upheaval and not have it end in bloodshed.
I had planned on opening a bottle of Prosecco to celebrate. I'll get back to Prosecco later. Carolyn beat me home and had dinner started so she was already into a bottle of Cinsault. It's a rose. It's from France. Yes, you heard it right: France. It's an unfashionalbe wine from a country we're supposed to be boycotting. Well, that was until today. We can call 'em French Fries again! Every day I drive by a sign advertising a "Freedom toast" breakfast and I just want to weep. During WWI they took to calling saurkraut "Belgian Cabbage". I'm sure that helped in the war effort.
Anyway, no matter where you fall on the I love/blame the French, it's ok to drink rose again. Really. This is a lovely one. Carolyn will tell you the color is a good indicator. It's not PINK! It's not an underachievieng red either. It's a lovely coppery red that just looks great. Yes Virginia, looks count in wine. It's a bargain too. Figure around 9 bucks. An important note about rosé (ah! got that accent key figured out!) is that you shouldn't be spending a ton on it. This isn't a "drag the big glasses out and shove your nose in and concentrate kind of wine. If Robert Parker's private jet is forced down in your back yard, don't offer him a rosé unless you've plied him with a couple of burgers first. Your good rosé should have a nice bit of sweetness but not too much. You should get a sense of fruit but I think a good one should finish dry. Cinsault's label says I should be tasting cherries, rasberries and orange blossoms. I don't know about the orange blossoms. It's been a couple years since I've shoved a handfull of those in my mouth so I really don't have much to go on there.
The chicken is out of the oven and we've moved on to an Aussie chard/semillon blend. More on that after dessert.