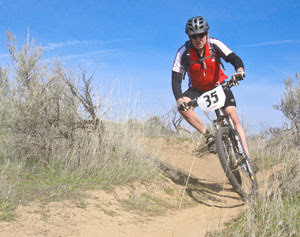 Last Saturday was the 2nd annual Echo Red to Red bike race. I decided to drag my flabby winter body out to the other side of the state to see how it felt to race again. The course is over high desert country up and down a low series of mesas on 17 miles of well maintained single track. Last year the race drew about 175 riders and was held about two weeks earlier. It was snowing coming into town but the freezing rain held off until the end of the race. Despite the weather, hypothermia, and nearly five hour drive, I loved it. The course totally thrashed everyone. I cramped up about a third of the way into the race and really struggled just to finish. It's one of the few races where I've felt like I just wanted to stop riding and rest.
This year race day was sunny and in the 60's. It felt great to leave the jackets, booties, wool hat and winter gloves behind. No really, I looked like Ralphie's brother Randy in "A Christmas Story" - I couldn't put my arms down I was wearing so many layers. The downside was a complete lack of shade on the course. None anywhere, so you're just out there baking. I packed extra water and hoped for the best. A sunny day and word of mouth meant that the field grew to 317 this year. I think we doubled Echo's population for a day. Quite a site. I staged with the other Cat 3 riders and rolled out on the neutral start. This race is unusual in starting with a neutral rollout for about a mile on pavement with a pace car keeping everyone in a bunch. It's kind of fun talking with people and getting gear adjusted. I met a woman who had also just turned 50 and was doing her first race.  The pace car turned us on to a dirt road and the actual racing began. We had maybe two miles of dirt road on a gentle climb to stretch the field out. I settled about mid pack and found a decent pace as we swung onto the single track and the real fun began. I noticed the woman I was talking to was already way ahead of me. I kind of figured that, while it might be her first mountain bike race, it probably wasn't her first race.
Echo is all about conditioning. It has steep climbs and technical descents but none of them are long enough for you to stretch out a lead. and there are very few places where you can recover if you push it. You basically have to ride stronger and pull away slowly. I wound up on the wheel of a woman who was killing me on the climbs but struggled on the descents. She'd get 50 to 100 yards on me climbing and I'd reel her in going down. This went on most of the race until she crashed going up a tight switchback. It was one of those rare occasions where I had a bit of an advantage. My bike is more of a trail bike than a race bike. It's maybe 4 lbs too heavy and has way more suspension travel than a racing rig. You can't use as much of your body to push the bike. You stand up to pedal, the suspension bobs and all that up and down motion is lost forward momentum. So I spent the entire race seated - which sucks if you're looking for boosts of speed - but works if you need consistency and to keep both tires stuck to the trail.  She was out of her saddle and lost her back tire traction. Eventually she reeled me back in on the long fire road climb out of the single track. I was cramping pretty badly by then and was just trying to keep pedaling. It took longer for cramps to set in this year. I tried a sort of cycling folk remedy for cramps - eating Tums ant-acid. The theory is some magnesium in the tablets helps prevent them. All it really seemed to do for me was make my breath minty fresh for the whole race. Riders overtaking me could smell me from hundreds of yards back. They probably thought the desert was full of wild mint and isn't it nice being out in nature until they saw me gasping away and noticed the smell faded once they passed me. I ended up dead last in my age bracket but still finished ten minutes faster than last year. It was an unusually competitive field. Fewer real beginners and more hard core racers.

Still, despite the cramps and  bad placing, I had a great time. The trails are so much fun and I actually did feel better this year. Anyone who finishes this race gets respect. Even Cat III is 23 miles so it's hard work no matter what class you race.

No fan club on this race. Mallory's family is still in ski racing mode and Carolyn had to work. I raced Saturday, we packed Sunday and Monday after work we headed off for a three week vacation in Sicily and New York. As I write this, I'm sitting in our room in Trapani on the west coast of Sicily. More on that in the next post.